The UN Verification Mission in Colombia and the UN Development Program support these initiatives.

Fourteen workshops of people in the reintegration process: 10 of them in the former Territorial Areas for ​​Training and Reintegration (TATR) and four led by women in Cali city, plus several women former combatants in Medellín city, reoriented their machines to produce face masks and contribute to the country's response to the coronavirus pandemic. 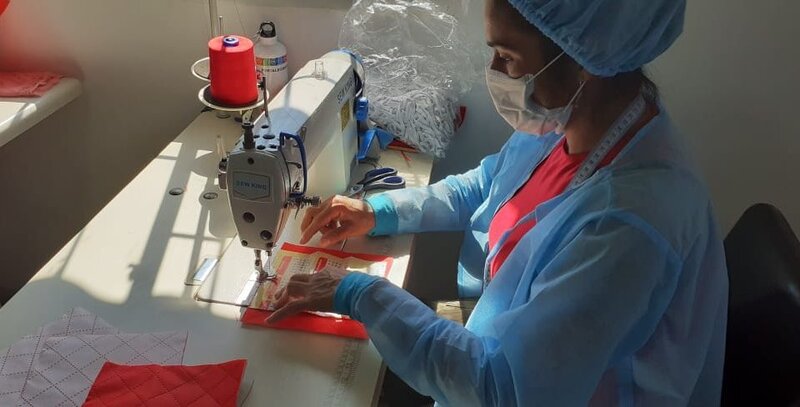 Production of face masks in the former Territorial Area for ​​Training and Reintegration (TATR) of Agua Bonita, Caquetá.

Given the shortage of face masks in the country, particularly in the regions where they are carrying out their reintegration process, the former combatants requested support from the UN Verification Mission in Colombia to obtain the necessary resources for the production of this product, which has become essential for dealing with the emergency. 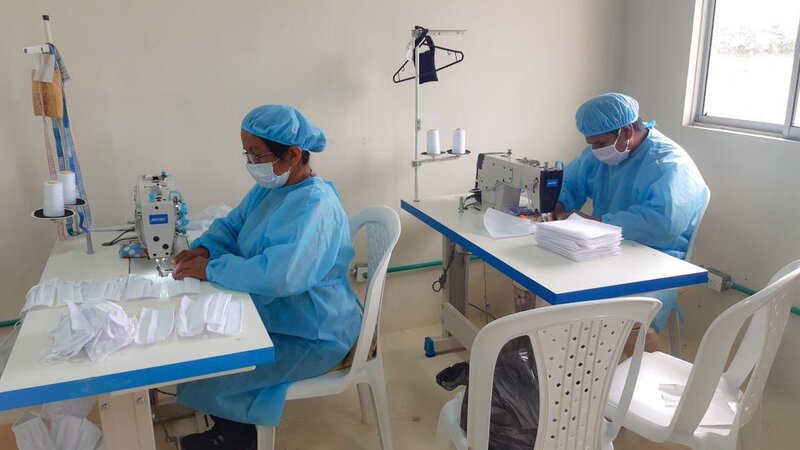 Production of face masks in the former Territorial Area for ​​Training and Reintegration (TATR) of Caldono, Cauca.

"This is a symbolic and significant initiative, of resilience and peace-building, which shows the commitment that people in the process of reintegration have with peace in the territories, with the reconstruction of the social fabric and the promotion of coexistence," affirms Alessandro Preti, head of reintegration of the UN Verification Mission in Colombia.

The people in the reintegration process that manufacture the facemasks received technical support from the National Institute for Medicines and Food Surveillance (INVIMA), in coordination with the Ministry of Health and Social Protection, through virtual training in late April to confirm regulatory and technical production.

In the reintegration area of ​​La Plancha in the municipality of Anorí-Antioquia, the sewing machines with which they make backpacks and sportswear at Confecciones La Montaña, are now used to produce face masks. To date, they have manufactured 14,000 units, of which "a thousand have been donated to the municipality and neighbouring local communities, and many others for the ex-combatants and their families here in the reintegration area," affirms Guillermo Chancí, a member of Confecciones La Montaña. He added that 60 food baskets with products from the TATR were donated to low-income families in that municipality, each with a package of 5 face masks. The rest will be for sale.

The UN Verification Mission in Colombia and the United Nations Development Program, UNDP, delivered supplies to Confecciones La Montaña to produce 10,000 more face masks. The brand also launched a digital marketing campaign on their social media to market them "at a fair price," they said.  "Each face mask will be sold at a half dollar and packages are also sold at different prices, the quantities may vary," they affirm.

In another reintegration area of Antioquia, in Llano Grande, municipality of Dabeiba, the Verification Mission and the UNDP support the tailoring shop 'Hilos de Paz,' where former combatants and people from the community work. Now they are making thousands of face masks, since the workshop, which also makes sportswear, was stopped. 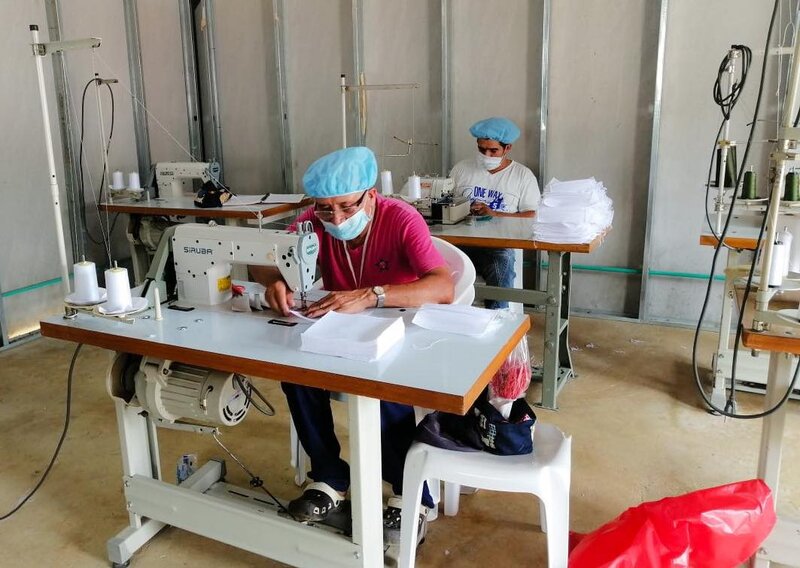 Production of face masks in the former Territorial Area for ​​Training and Reintegration (TATR) of Llano Grande, Dabeiba, Antioquia.

In the municipality of Icononzo, Tolima, the alliance between the clothing company Manifiesta and the former combatants cooperative 'Tejiendo Paz' in the reintegration area of La Fila, and with the support of the 'Red de Iniciativas Comunitarias' and INDEPAZ, is producing face masks to be donated to the communities at highest risk: elderly people, people in overcrowded conditions, carers, among others. ‘Tejiendo Paz,’ which participated in the training on face mask manufacturing, has been included in the INVIMA's register, which allows it to manufacture face masks for use in hospital environments and health professionals. 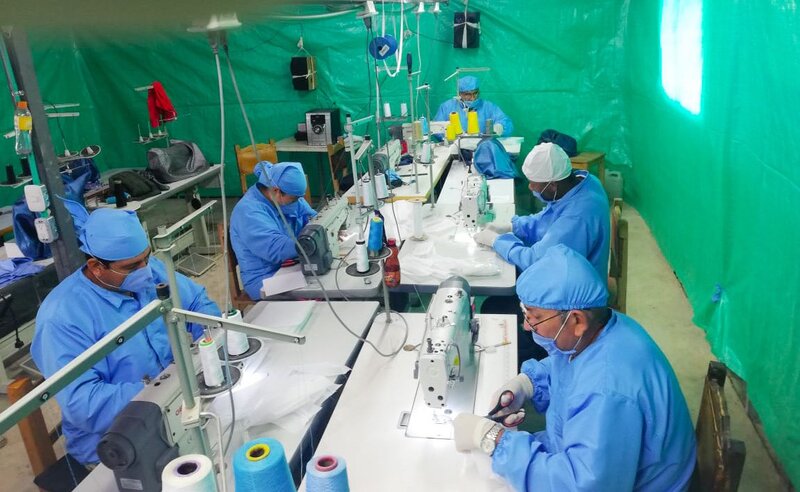 Production of face masks in the former Territorial Area for ​​Training and Reintegration (TATR) of Icononzo, Tolima.

With donations received since March, Icononzo has already produced thousands of units that have donated as follows: 1,000 face masks for the geriatric home, in the urban area. Thousand for the 'La Picota' prison population in Bogotá. Another 1,000 for indigenous communities in the Las Hermosas canyon in southern Tolima, and 4,000 for a hospital in Neiva, Huila. They will now manufacture 16,800 units with the inputs received from the UN Verification Mission.

"The main driving force behind this project has been the support of Colombians and now of the UN Mission, thanks to your donations they have allowed us to transform our production of fashion clothing into masks," says Angela Herrera, designer and member of Manifiesta. “At this time, several offers have already been received from companies and institutions to produce face masks to market, which we hope will materialize. From my perspective as an entrepreneur, I believe that this work of donning face masks to the most vulnerable is an act of peace that demonstrates the willingness to continue building a better country by the ex-combatants of the Tejiendo Paz Cooperative.”

In Pondores, La Guajira, the Fariana Confecciones Workshop of the Multiactiva Cooperative for Peace in Colombia, Coompazcol produces 12,900 face masks with this support from the UN Verification Mission and UNDP. The former combatants will distribute 500 for the use of the community and 12,400 for sale, UNDP is working to strengthen its business plan. 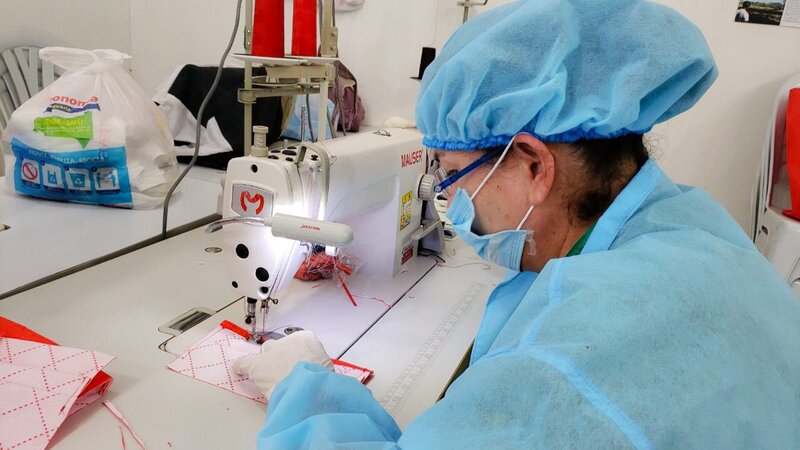 Production of face masks in the former Territorial Area for ​​Training and Reintegration (TATR) of Pondores, La Guajira.

In the municipality of La Montañita, Caquetá, in the reintegration area of Aguabonita, former combatants manufactured several hundred face masks with a balance of ecological fabric for bags and donated them to the nearby communities. They have already received the contributions provided by the UN Verification Mission and are producing 4,000 units to benefit the most vulnerable communities in the municipality. Also, they are exploring the possibility of the cooperative becoming an official supplier to the departmental government.

In the municipality of Caldono (Cauca), ex-combatants from the "Hilando la Paz" workshop in Los Monos are producing handmade facial masks for the community of the former reintegration zone and the neighbouring community. To make the face masks, they use biodegradable material known as 'cambrela,' a type of non-textile fabric that is produced as a result of recycling processes. They are also producing face masks for industrial use, some of which they intend to donate to the indigenous guard and the Maroon guard. 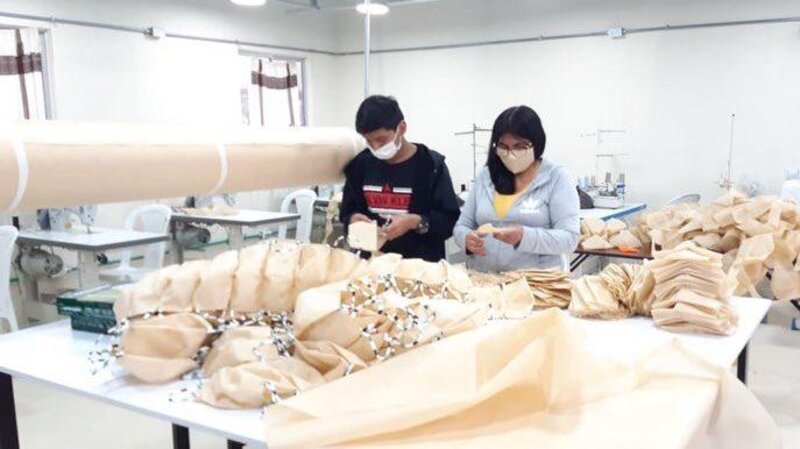 Production of face masks in biodegradable material known as 'cambrela, in Caldono, Cauca.

In addition to these initiatives supported by the Verification Mission, other textile workshops in other former territorial areas for training and reintegration, have also been transformed to produce masks such as the one in Caño Indio in the municipality of Tibú, Norte de Santander. Four women in the process of reintegration have already produced 1,500 units of face masks, taking advantage of the morning shift in which, they have electric light. It will be distributed to nearby communities. 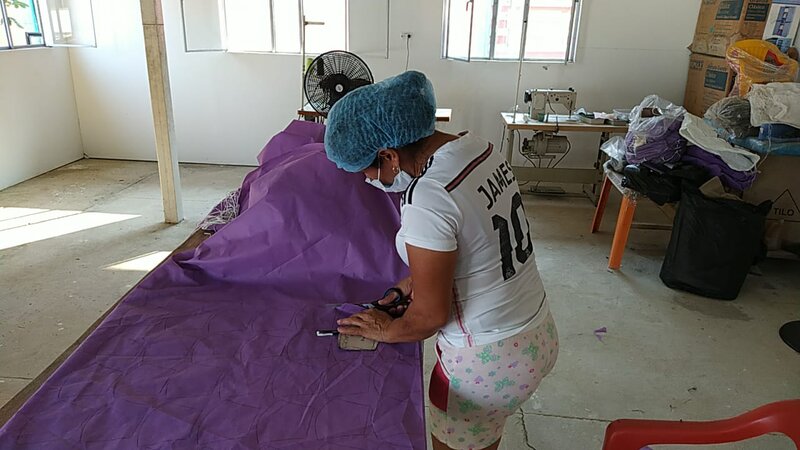 Production of face masks in the former Territorial Area for ​​Training and Reintegration (TATR) of Caño Indio, Norte de Santander.

Other reintegration areas are also advancing in this work in the municipalities of Manaure Balcón del Cesar, in Cesar (TATR Tierra Grata); in Remedios, Antioquia (TATR Carrizal); in La Macarena, Meta (TATR Playa Rica / Yarí); in Miranda, Cauca (TATR Monterredondo), and others outside reintegartion areas, in cities such as Cali, Medellín and Bogotá. 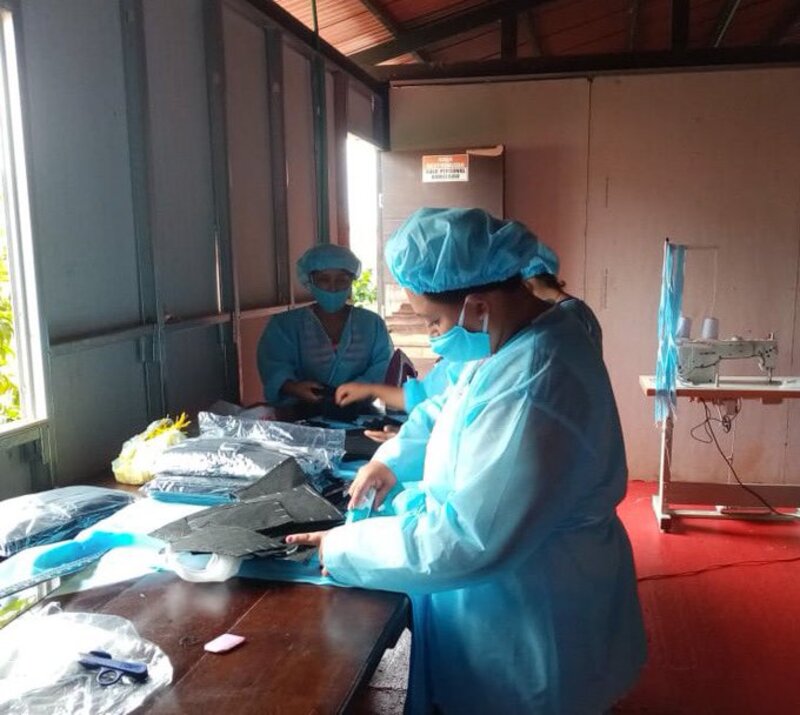 Production of face masks in the former Territorial Area for ​​Training and Reintegration (TATR) of Vista Hermosa, Meta.

With these supports, the clothing workshops of the people in the reintegration process are facing the challenge that the quarantine has represented, and will contribute in solidarity to the country's response to the COVID-19 pandemic while contributing to national reconciliation.

Former combatants provide information on mines to restore land to victims and indigenous community.
10 Jun 2021
Music Lessons for the Children of Tierra Grata thanks to a youth project seeking peace and reconciliation
31 May 2021
Security Council Renews Mandate of Verification Mission in Colombia until 31 October, Unanimously Adopting Resolution 2574 (2021)
Mandate Expanded to Include Monitoring Compliance with Sentences Issued by Special Judicial Body for Crimes Committed during 50-year Conflict
11 May 2021