In Medellin: music, memory, and reconciliation

In Medellin: music, memory, and reconciliation 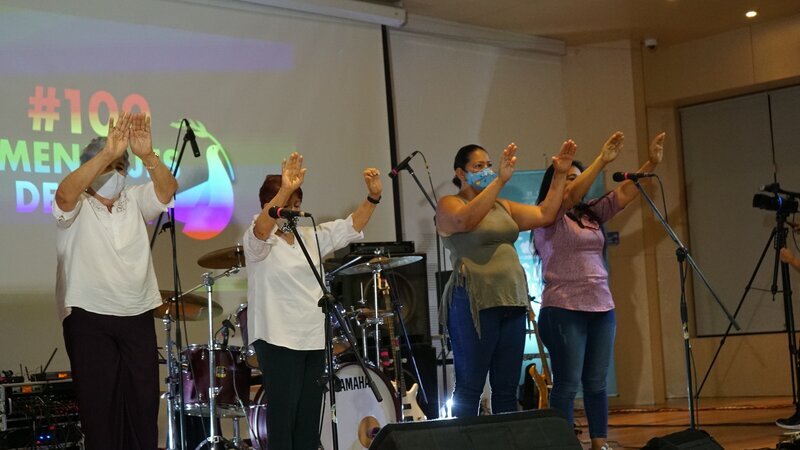 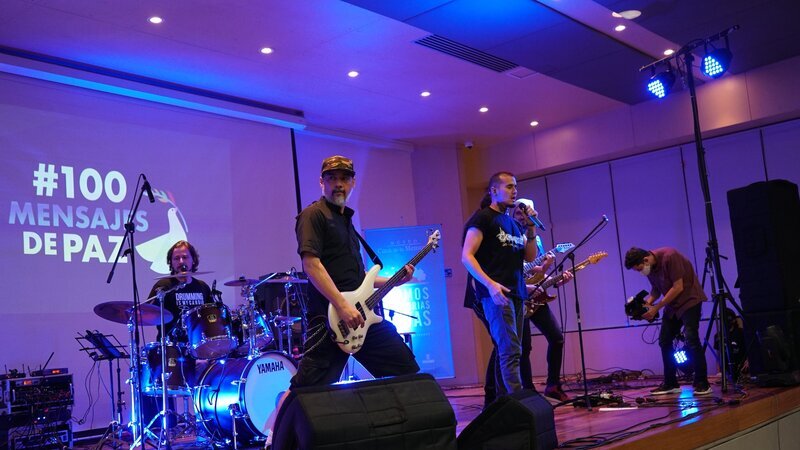 The day of Music, Memory and Reconciliation was marked by moving messages of peace for the city. Photos: Susana Molina / UNVMC

With the message of the memory and dignity of the victims, represented in the Mothers of La Candelaria. The reconciliation message, of the Farc women former combatants who started a community store in Medellín. And the music with a repertoire of songs about hope and peace, from the band Ekhymosis, this event brought together representatives of the government at different levels, UN agencies, social organizations, artists, victims, and former combatants who were able to reflect on their contribution to building peace.

The day began with a performance by the Medellín Philharmonic Orchestra of J. Pachelbel's Canon in D major. "We put music at the service of peace because we know that we can heal situations of conflict, war, and social injustice," said one of the musicians.

Afterwards, the message of the UN Secretary-General, Antonio Gutérres, was presented, who highlighted "Forging Peace Together" as the central theme of the United Nations to commemorate the International Day of Peace, as a day dedicated to strengthening the ideals of peace. "Despite not being together for the Covid-19, we can work together for a more inclusive, egalitarian world and sustainable development". 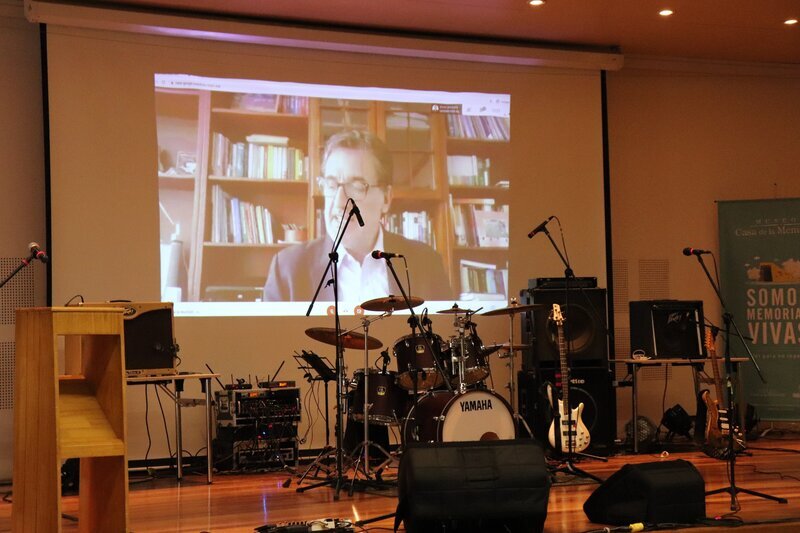 Alessandro Preti, head of reintegration of the UN Verification Mission in Colombia, highlighted the development of this activity at a time when Medellín is commemorating the Month for peace. "This year, it has been clearer that we should not see ourselves as enemies of each other, but as human beings who have a common enemy that threatens our health, security, and lifestyle. In any corner of the planet, COVID 19 has filled us with uncertainty but also with solidarity. In Colombia, even amid this unexpected situation, we have a collective responsibility to contribute to the construction of peace and to continue with the integral implementation of the Peace Agreement signed in 2016," he said. 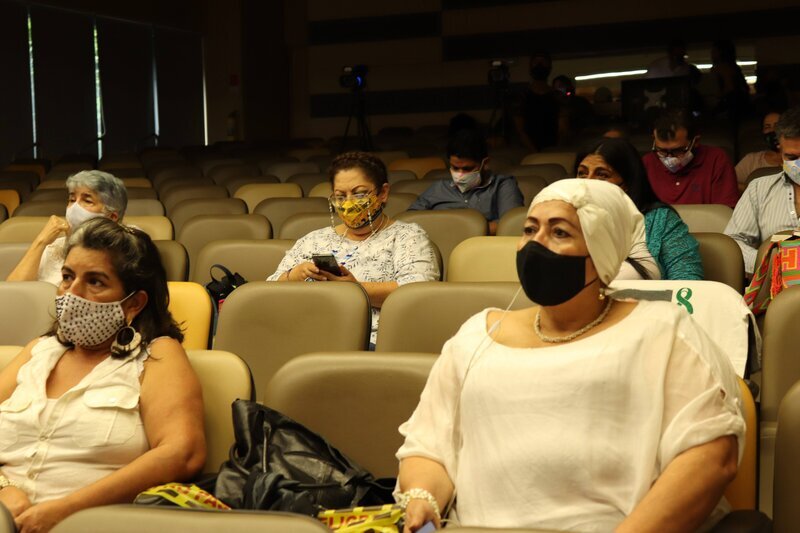 Fifty people participated in the meeting in a face-to-face manner, complying with the security protocols established for Covid-19. Photo: Susana Molina.

The director of the Museo Casa de la Memoria, Jairo Herrán, highlighted that peace is the absence of war, harmony, and conflict resolution. "The celebration of the International Day of Peace should focus on the ceasefire that affects the world. Working for peace from civil society so that children, youth, and civil society identify with it," he said.

Diego Herrera, Deputy Secretary of Human Rights of the Mayor's Office of Medellin, highlighted peace as a right. "Peace is a right and cannot be separated from human rights. Peace is also a social event with an unlimited field," he added.

Five women in representation the Mothers of La Candelaria, who have been working for more than two decades to support the mothers and women of the hundreds of disappeared in the country. And another five women who left behind their weapons and today are advancing in their reintegration process in Medellin, and who with their work want to build peace and give testimony of it, attended the event as a testimony of memory and reconciliation.

They were responsible for giving a message of peace that ended with an emotional act of reconciliation, facilitated by the territorial director of UNDP in Antioquia, Carlos Iván Lopera.  Four representatives of these women sent the messages. 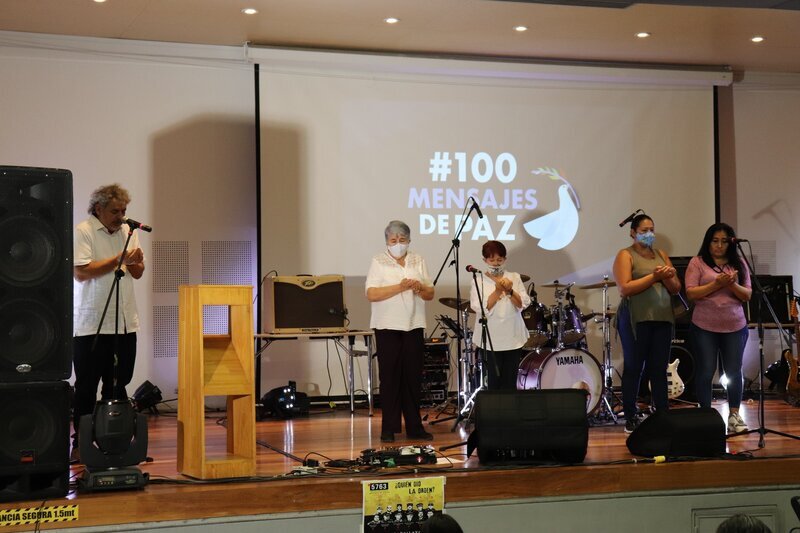 The message was led by Teresita Gaviria of the Mothers of La Candelaria: "We are melting for peace. Peace has brought us much love. We, the victims of this country, have dialogued; we always want to have a reunion. We have no hatred or resentment. The loss of our dreams was many. We want to build spaces of reunion with those who one day did us harm. We ask them for the truth, and we end up building peace," she said.

"That's what we tell everyone who doesn't believe in peace. We demand dignity and respect. Our pain is unparalleled. We do not have a grave to mourn our relatives in, but rather celebrate life for the lost ones with the memory and the desire to continue working for those who are alive. Not criticizing, not judging the other. The happiest thing is to forgive, to be able to reconcile, for seeking the truth and working in healthy peace.”

For his part, Enith Moreno, former combatant in the reintegration process in Medellín, sent a message of hope: "Participating in this event makes us very excited. Knowing that one day we were part of an armed conflict as perpetrators. A group of signatories continues to work towards a social, political, and economic reincorporation. But there are many who are not betting on this process. We are grateful to the United Nations, which has led and guided us with its hands in the face of so many obstacles and adversity. Peace is healing our hearts, it is forgiving, thinking that one day this will end when we learn to forgive those who have hurt us. Today we are here because we believe in peace," she said.

The moment ended with a reflection, and, spontaneously, victims and former combatants embraced each other. Carlos Iván Lopera of UNDP summarized this in the following message: "You, dear women, are sowers of good seeds, seeds of love and reconciliation. Those seeds sown with tears, representing pure love, reflect the path of progress to a new reality that commits us, a reality that we can all build; we cannot delegate its construction to others. One sows with one's hands, and today we venerate those hands of you, of the victims and of the women ex-combatants, hands that sow reconciliation," he said.

Francesc Claret, head of the Antioquia regional office of the UN Verification Mission in Colombia, thanked the women for this message of peace. "We know what it has a cost and the pain and the sacrifices of what it has cost. It is too precious, valuable, and real for any impediment to be imposed. The UN Verification Mission has done this work thanks to you; we have done it with all the passion and commitment and be very proud as Colombians of what you have achieved," he said. 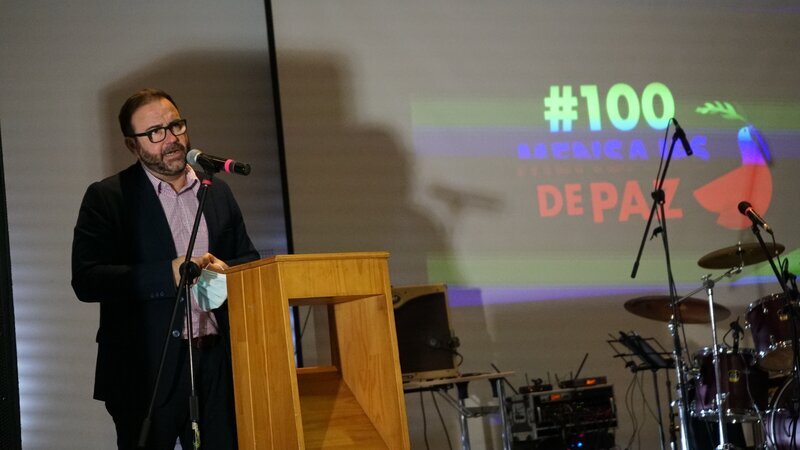 Francesc Claret, head of the regional office in Medellín of the UN Verification Mission in Colombia.

Why can music itself be a message of peace? Ekhymosis, a band formed in Medellín 30 years ago by Juan Esteban Aristizábal -Juanes- and Andy García, closed the day with a repertoire of songs alluding to peace, reconciliation, and hope interpreted in memory of the victims of the conflict.

The concert included the songs Azul, La Tierra, De Madrugada, Ciudad Pacífico, and Solo. "You have to be an artist to learn how to turn the mud of terror into an opportunity to commemorate the life," concluded Andy Garcia of Ekhymosis. 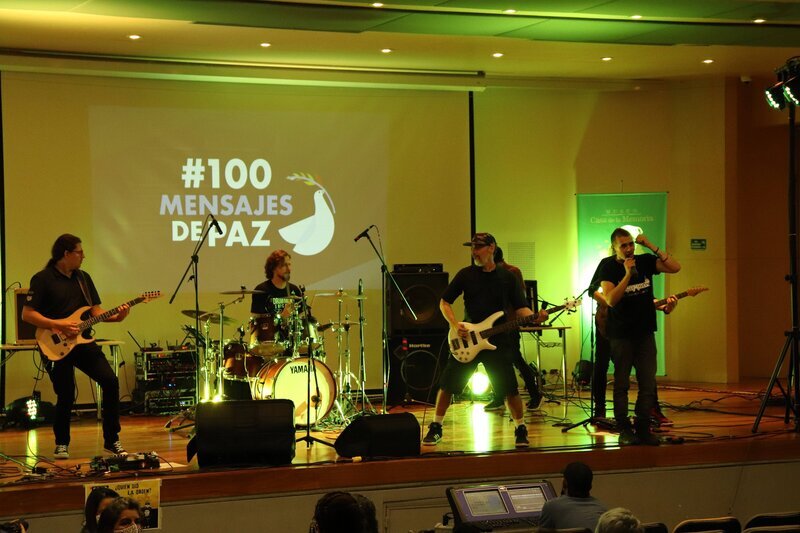 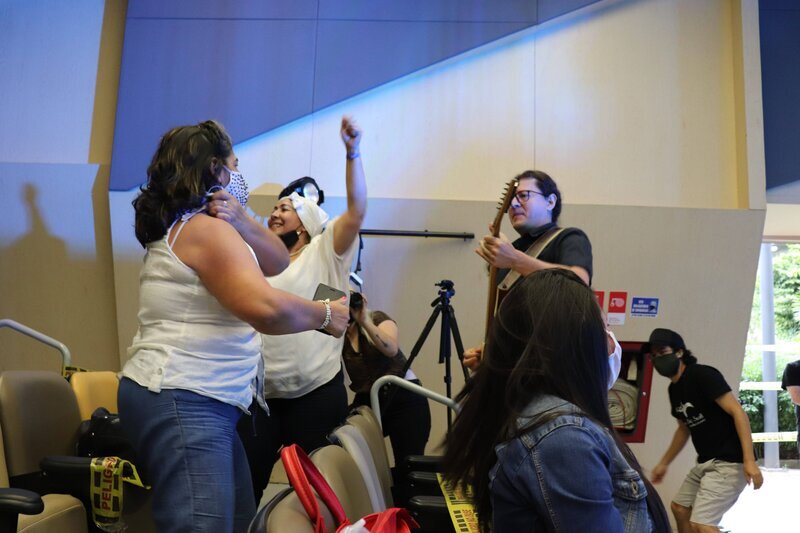 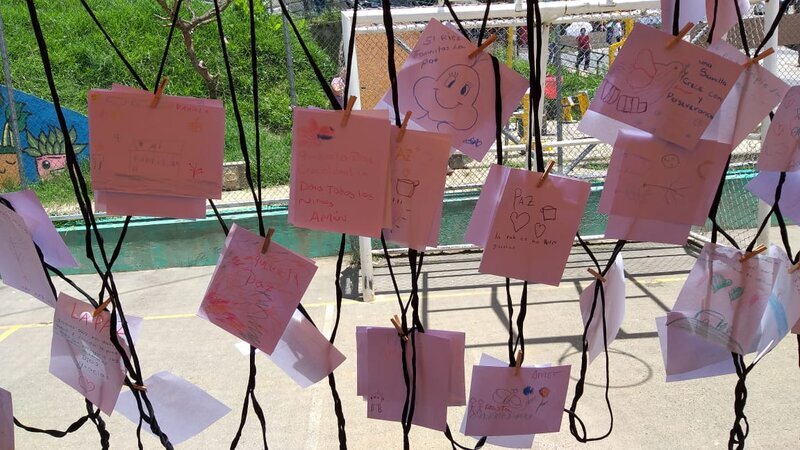 The commemoration of the International Day of Peace continued until 24 September with the Peace Stations. In this way, four communes of the city were reached thanks to an initiative led by the Undersecretary of Human Rights of the Mayor's Office of Medellin, which joined the campaign #100Messages of Peace and had a special place to receive messages from the inhabitants of the neighbourhoods. 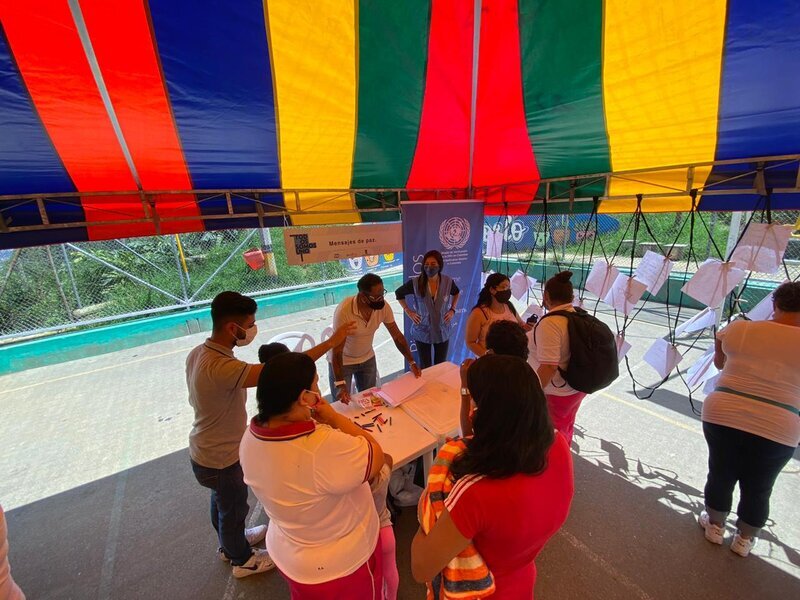 The Peace Stations were located in the communes 4, 7, 8, and 13 of Medellin and had three modules: one of Peace Storytelling that the Mayor's Office arranged to collect stories written by children about peace. Another module about the protection of social leaders, and the other dedicated to the work of the UN Verification Mission in Colombia and its campaign 100 messages of peace.

At the various stations, the Covid-19 biosecurity controls had to be intensified given the arrival of dozens of children and their relatives, who wanted to participate in the day. There they not only wrote messages and stories, but children and adults performed origami, listened to storytellers, played on educational stations, and expressed themselves about peace. The Peace Stations will continue in the rural areas of Medellín during October.

In total, more than 400 stories, texts, and drawings about peace were collected. It makes more than 2,000 interactions in campaign #100PeaceMessages. (Watch video) 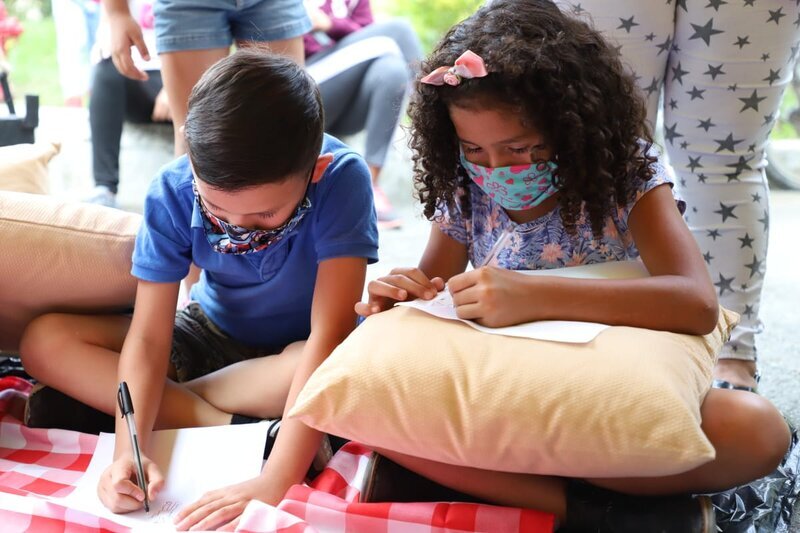