The concern about the spread of COVID-19 is also present in the reintegration areas. They are facing challenges and have closed their borders.

The virtual world and isolation have also become part of the daily life of the 24 former Territorial Areas for Training and Reintegration (TART) housing nearly 3,000 former FARC-EP combatants and their families.

The fear of the spread of the coronavirus, given the few sanitary conditions in TATRs, adds to the reintegration challenges already faced by ex-combatant communities before the pandemic.

"We live in precarious conditions. We do not have a bathroom per house, here we share three sanitary facilities for everyone, and we do not have an aqueduct nor sewer. The virus, in these conditions, would be fatal", says Wilman Aldana, one of the leaders of the Reintegration Area in Tierra Grata, Manaure - Cesar. 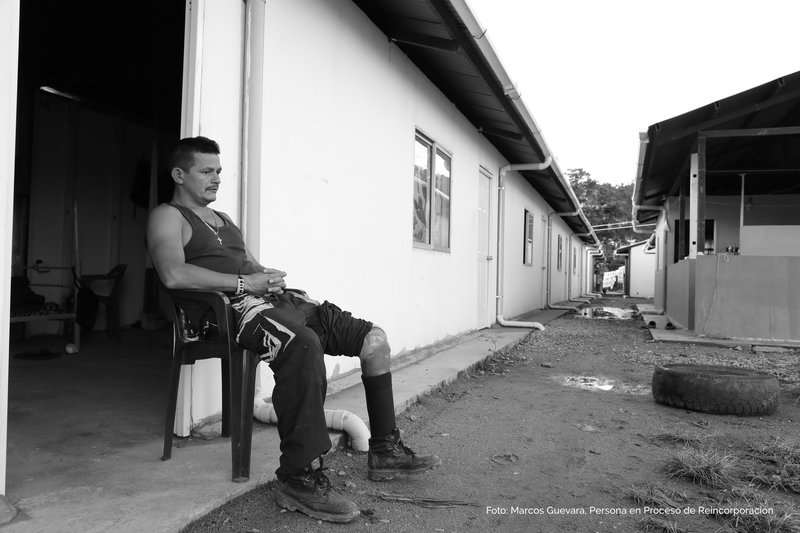 For this reason, and following the recommendations of the Government, former combatants have prohibited the entry of visitors and external personnel to the TATRs, restricted residents' movements, conducted disinfection days, and educational campaigns. Also, coordination instances between the parties, such as the Blue Tent and the ITPS, in which the UN Verification Mission participates, continue to be carried out, but online.

In the Guaviare, both in the former Colinas and Charras TATRs, people in the process of reintegration carry out educational days on healthy habits, such as handwashing and boiling water for consumption, and children participate in the educational days of the Ministry of Health, the Army and the Colombian Institute of Family Welfare. At the entrance to each area, there is a shower for bathing before and after going out.

Wladislav Aguirre, one of the leaders of the former TART of Filipinas, in Arauca, has been emphatic in affirming that the population in the process of reintegration has definitively complied with the measures: “We are now in legality. Therefore, we follow the directives of the Government."

Daniela Canticuz, who became certified as a nursing assistant at the National Training Service (SENA by its Spanish Acronym) after healing wounds in the guerrilla, oversees health at the former TATR of La Variante, in rural Tumaco, Nariño." 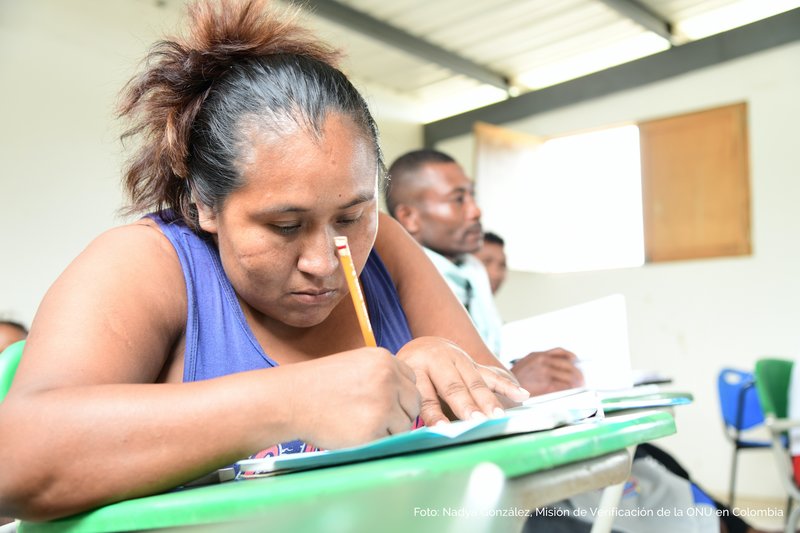 "The first thing is to recognize the symptoms," says Daniela, who cares for children and advises parents on managing the disease at home. "Most of them come with flu or mild illnesses. The motivation to help the community is to prevent this disease from coming into our homes. Daniela is afraid her son will get sick. If there are cases of people with persistent symptoms or more serious illnesses, she relies on the IOM nurse who follows up by phone and liaises with Hospital Divino Niño, in case more specialized medical care is needed.

Although, 98% of former combatants are registered in the national health system, and receive care in nearby municipalities, in the 24 former TARTs there are temporary health services that have been affected by the crisis, which is being monitored by the Government, FARC, and the UN Verification Mission.

In Tierra Grata, Cesar, for example, where a rural doctor went twice a month to carry out external consultations, follow-up, and cytology, and where SENA health managers were available, now the health post is Out of service. 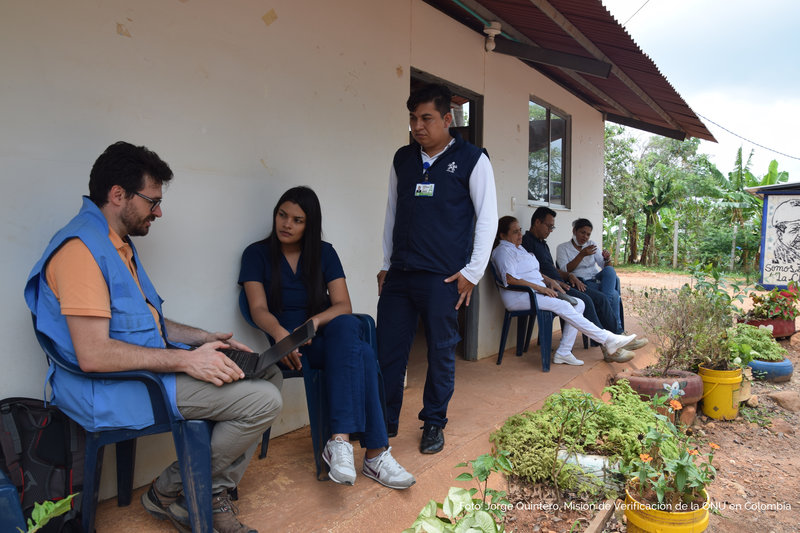 The Technical Board of Health of the National Council for Reintegration meets constantly and virtually coordinates the response measures to Covid-19 in permanent communication with the TART. This Table is made up of delegates from the FARC, the Reintegration and Normalization Agency (ARN by its Spanish Acronym), the Ministry of Health and Social Protection, and the UN Verification Mission.

"We have a care route in the event of a suspicious COVID-19," says Alminda Mindiola, another nurse from Farc certified by SENA and head of health services in Tierra Grata. “We are in daily communication with ARN, and we participate, once a week, in the Technical Health Table. We also have a direct line with the hospital in La Paz, as well as the hospital of Manaure, and thanks to this joint work, we have already made telephone consultations with doctors.” 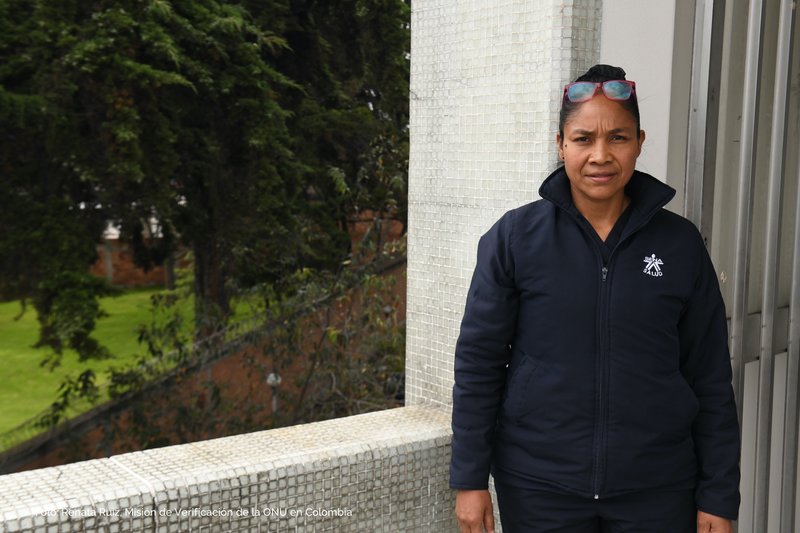 The gender working groups of the former TARTs have also played a key role in the prevention of domestic and gender violence, not only in these areas but also in nearby communities, given the increase in cases at the national level.

To promote gender equality and coexistence, UN Women and the foundation 'Hombres en Marcha' are developing the project "Masculinities for Peace," in the former ETCR of the Variante in Tumaco, Nariño. "Men work for equality so that your masculinity is not violent," says the chorus of the song launched in the middle of the quarantine and the result of the work of women, children, and men who in recent months have been trained in non-violent and co-responsible masculinities. This action complements campaigns by the police and other entities that seek to prevent domestic and gender-based violence. 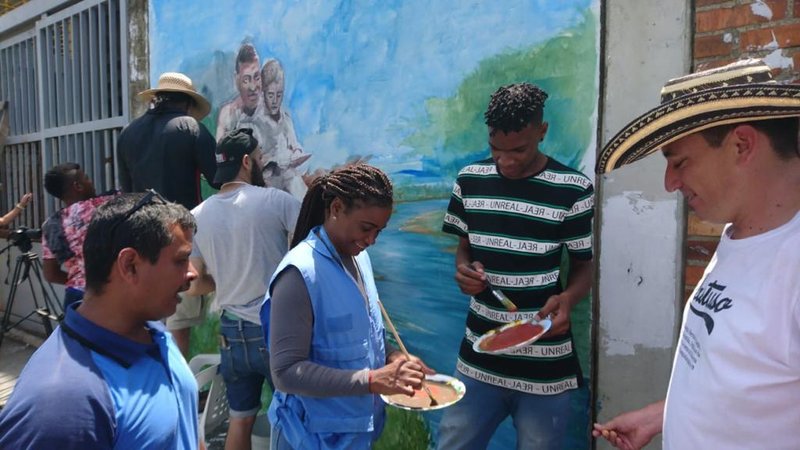 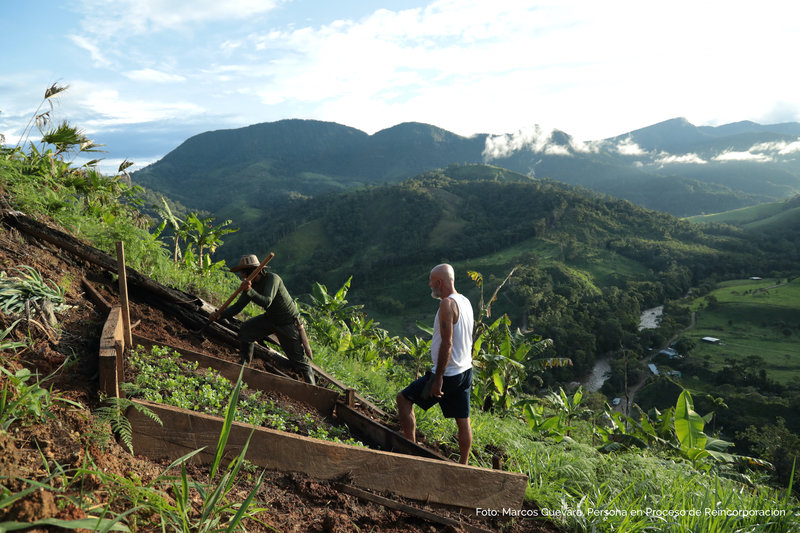 Among the measures taken to comply with the quarantine, classes in the "Arando la Educación" program were suspended, and the number of people who can work in the productive projects that are still in operation is limited.

"Many projects are completely stopped. Others are half-working, and a small number, especially related to food security, such as poultry projects, has played a fundamental role for self-sufficiency in quarantine," according to Jeiner Arrieta, a former combatant of the former TART in Pondores, La Guajira. 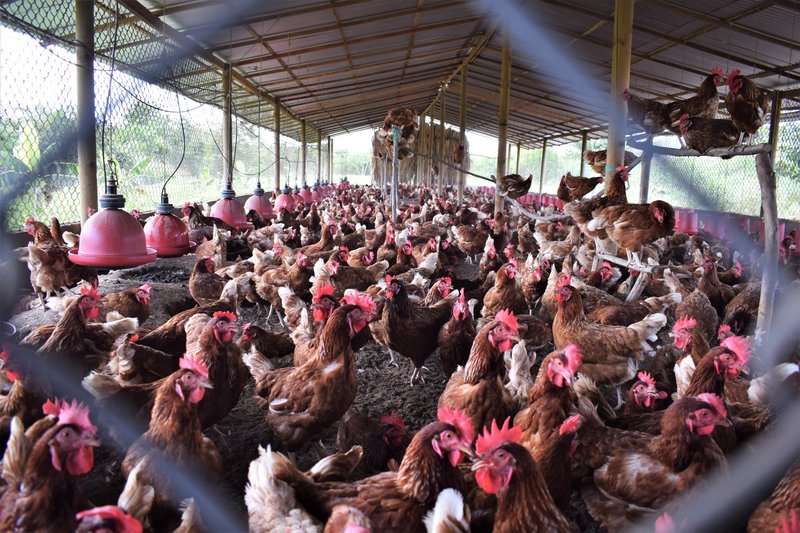 In Pondores, the only agricultural project that has not stopped is the poultry industry supported by the World Food Program (WFP) and the NGO Paso Colombia. "Production is at its maximum, we produce 150 baskets of eggs per day (each of 30 units). The demand for TART and the sale to a supplier in the local Fonseca market is being guaranteed, at the time of product shortages", explains David Díaz, coordinator of the Nueva Colombia Farm. Tourism projects, he added, are completely paralyzed.

In another former Territorial Area for Training and Reintegration, in El Oso, rural area of ​​the municipality of Planadas-Tolima, Edison Leyton continues to fight to keep the joinery workshop afloat. "I have seven beds, a dining room with eight seats, and two cabinets ready, and I have not been able to deliver them because there is no transportation, and of course if I do not deliver them they do not pay me, and without money, I cannot buy supplies," he says. 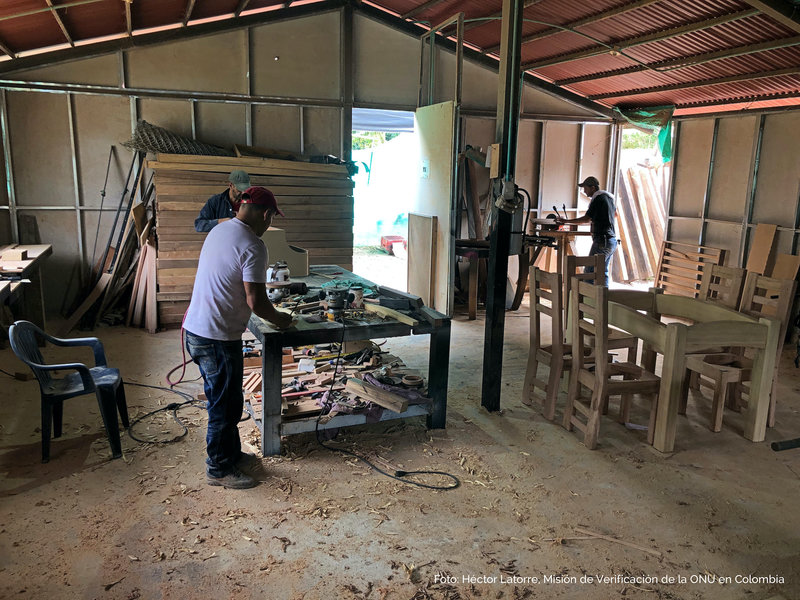 In El Oso, they are still working on the coffee projects, although the region's coffee growers fear that there will be no labour for the upcoming harvest, which is the municipality's main source of income. For this reason, the cooperative COMUMARFU of the former ETCR offered its help in securing the labour of ex-combatants in the coming weeks to the Association of Ecological Producers of Planadas (ASOPEP), which is their main partner in a future productive project of a coffee processing plant.

The crisis as an opportunity

Meanwhile, for other cooperatives and projects, this crisis has been an "opportunity," and they are facing the pandemic creatively. In El Oso, the fish farming project, of the Women's Association (ASOMAPROSO) sold its production of 26 arrobas of fish to the company that supplies fresh food to the former TATR. Therefore, the former combatants did not lose the product and the company fulfilled its delivery to the population.

In Riosucio, Caldas, the fish farming project in the Cañamomo Lomaprieta indigenous reservation sold its first harvest of 200 kilos of orange tilapia to local communities. While in Carmen del Darién, Chocó, ex-combatants from the former TART of Brisas take care of the extensive cultivation of cucumbers that they planted at the beginning of the quarantine.

For their part, several garment workshops are manufacturing face masks, either for use within the TATRs or to donate and support the surrounding communities, as has happened in Icononzo (Tolima), Anorí (Antioquia), Tierra Grata (Cesar ), Pondores (La Guajira), Aguabonita (Caquetá) and even in Cauca, wherein the Caldono TART ex-combatants from the “Hilando la Paz” (Sewing Peace in English) workshop are producing, in an artisan way, masks for ex-combatants and the community with a biodegradable material Known as cambrela, a type of non-textile fabric that is produced as a result of recycling processes. 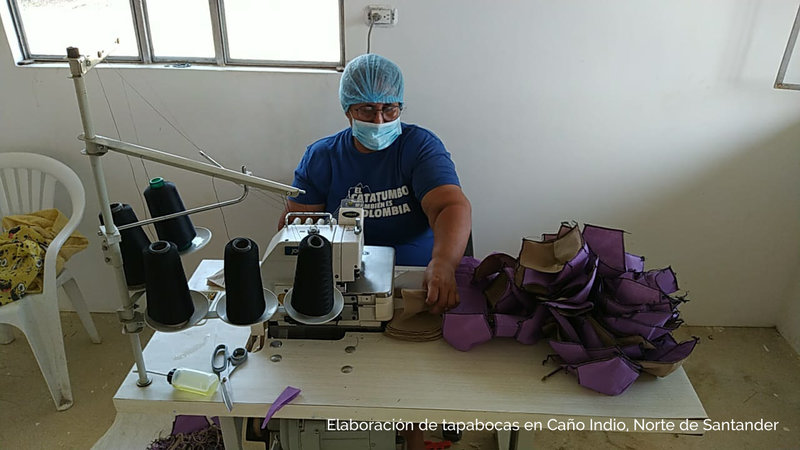 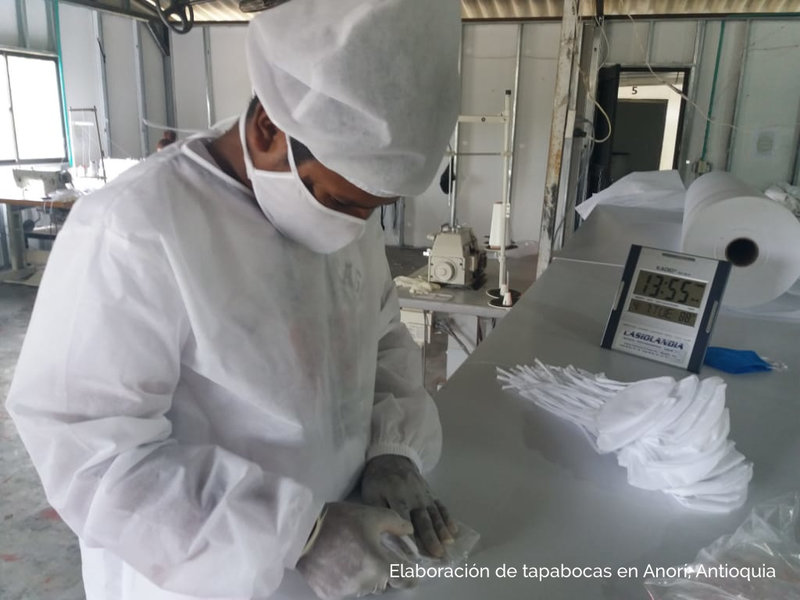 In La Montañita, Caquetá, in the TART of Agua Bonita, its inhabitants continue to work on their projects. “I make tamales, yoghurts, and sell them, and if one person comes after another, I make sure they are two meters away. We all wear masks and gloves and we only open until six in the afternoon, when we should be locked up,” says Lorena, a former combatant who has maintained her business during the quarantine. For her, the most difficult thing is the supply, especially of vegetables, “but we organize ourselves and one of us goes out every two weeks to make purchases for everyone because the entry of people from outside the area is prohibited. I do not go out at all," he emphasizes.

For Carlos Ruiz Massieu, Special Representative of the Secretary-General and Head of the UN Verification Mission in Colombia, "the current situation of attention to the COVID-19 presents us with new circumstances to which we must be able to adapt."

"The challenges to the implementation of the Peace Agreement are greater now because of isolation measures, restrictions on mobility and, specifically, direct technical support for productive projects. This adds to the pre-existing difficulties. For this reason, we are working with the government and the FARC so that through dialogue we can identify actions on contingency measures to maintain the projects and strengthen them as soon as the quarantine is over," said Ruiz Massieu. 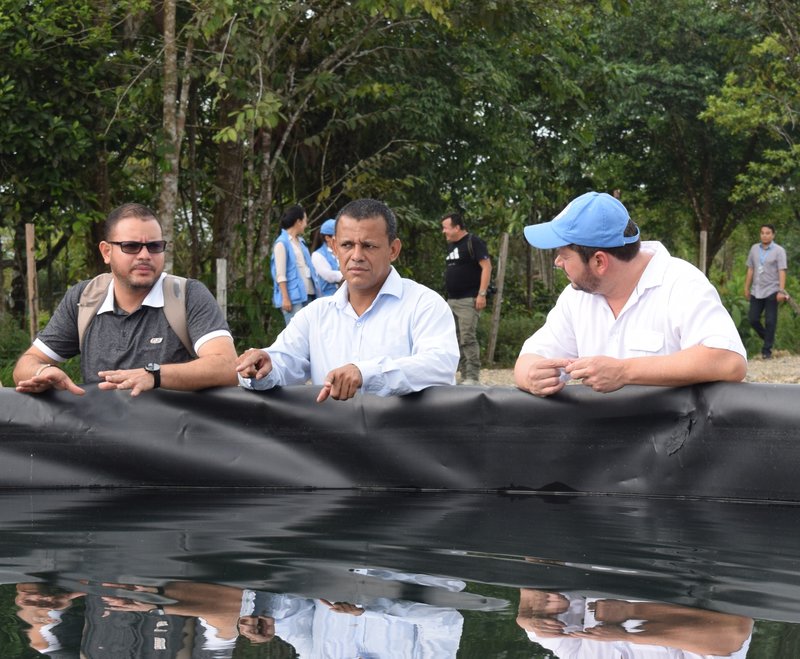 Photo Stock. Right, Special Representative of the Secretary-General and Head of the United Nations Verification Mission in Colombia, Carlos Ruiz Massieu, on a visit with the team from the Quibdó Regional Office to the collective reintegration fish farming project, with the accompaniment of UNDP and ARN.

The support of the UN Verification Mission, the international community, civil society organizations, communities, government institutions, as well as coordination, and collaboration between the parties, will be essential to adapt the implementation of the Peace Agreement, ensure the follow-up of matters related to peace, and avoid the occurrence of COVID-19 cases in the former TART.