'Sounds of Peace': Where Reconciliation has a youth-like feel to it.

'Sounds of Peace': Where Reconciliation has a youth-like feel to it.

Youths from the local community and the FARC collective in Cesar established a cultural training school to reconciliation between ex-combatants and their neighboring community.

Music classes, photography workshops, dance, theatre, digital communication, and an itinerant cinema club are some of the activities proposed by a group of young people to seek reconciliation between the former combatants of the Farc-ep and the neighboring community. As well as, to strengthen capabilities among the population of the village of San José de Oriente, in the municipality of La Paz, in El Cesar. 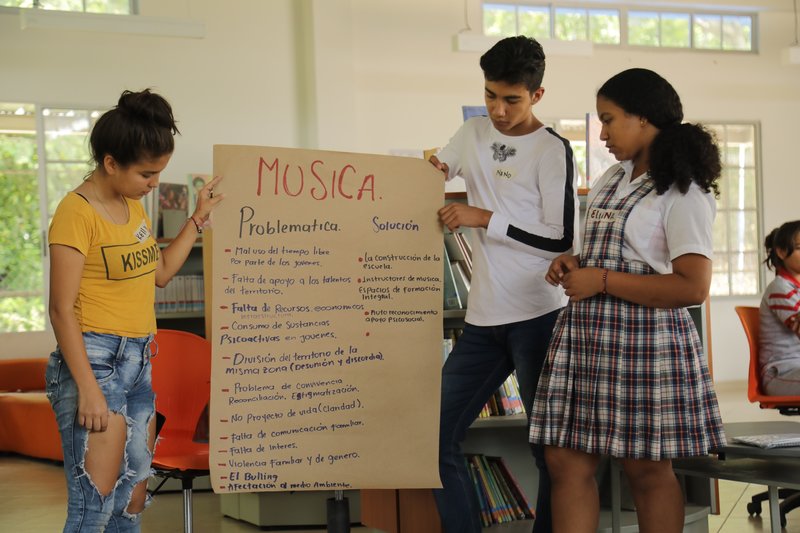 The protagonists of this story are 5 people in the reintegration process that make up the Communication Collective ‘La Rotativa’ of the Territorial Area for Training and Reintegration (TART) of San José de Oriente, and 17 people of the foundation ‘Building Dreams for Peace’, who accompanied by representatives of the United Nation Verification Mission in Colombia, the Development and Peace Program of the Cesar department, the Office of the High Commissioner for Human Rights (OHCHR), the Truth Commission, and the Agency for Reintegration and Normalization (ARN), worked in groups to analyze how through art and culture they can help the community to solve its main problems and, at the same time, be useful to encourage reconciliation. 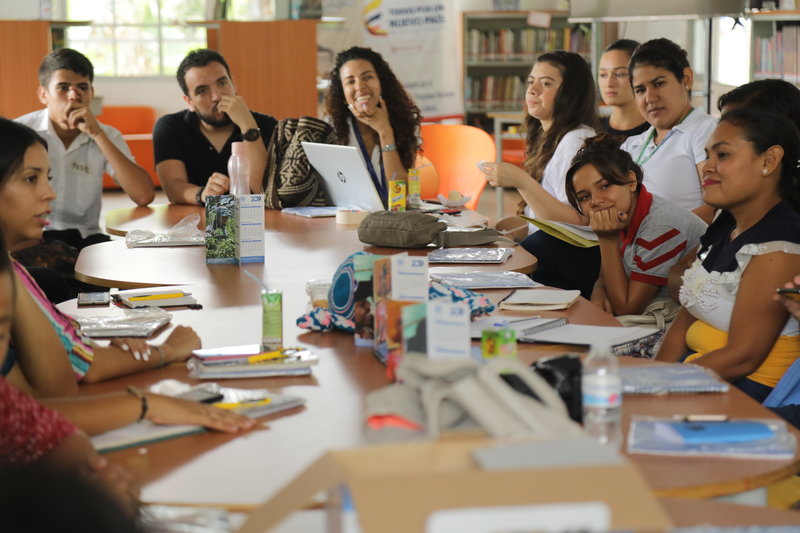 The project, which began to be formulated last year, was completed on Wednesday 15 May during a work session held in Betania’s neighborhood library and was itself an exercise in reconciliation. The young people, between the ages of 14 and 29, worked all day in the elaboration of programs for a school that intends to help the young people to strengthen and/or to construct their project of life, away from violence, and for the rescue of the memory of this region of the country, so many times affected by the armed conflict.

Juan Eleiser Arias, director of the foundation ‘Building Dreams for Peace’, explained that this project is about “building a meeting point, a sort of house for culture, where the youth of both Farc and the community can link and support each other through music, dance, theatre, photography, and communications”. 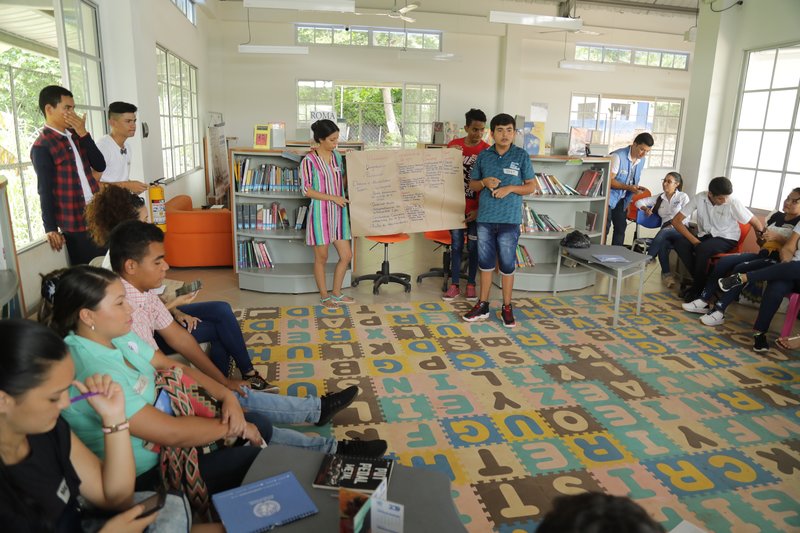 The foundation works through culture to prevent the use of psychoactive substances, gender-based violence, teenage pregnancy and environmental development, but this is the first time it has worked with ex-combatants and their families.

Working with ex-combatants has been rewarding, says the youth of ‘Building Dreams for Peace’, although they do not deny that the relationship was difficult at first.

"At the beginning it was a little tense, because there are still many images in our minds of the violence, but it is also an enriching experience, because I could see in their eyes the hope and the desire to build from dialogue and away from the conflict that has hurt us all”, says Duván Suárez, member of the Foundation.

This has been a positive experience for the youth of the TART. Obet David one of the members of the Communication Collective ‘La Rotativa’ and the son of a FARC ex-combatant says that this project is very important because it has allowed them to link with the community and work together to avoid being stigmatized. "We want people not to see us as weirdos, but to know that here, at the TART, also live civilians and that our relatives are genuinely placing their hope on peace. I believe this project has allowed us to be known and to build together to support peace”.

Obet takes photographs, records videos and is receiving communication training given by Farc and journalists from the city of Valledupar, who have committed themselves to the project through the management and initiative of the UN Verification Mission. He is part of the Communication Collective ‘La Rotativa’, which in turn is the press team of the TART.

"To achieve true peace, we must build bridges and strengthen ties of friendship with the community of San José de Oriente, which is the closest community to the TART. That is why I am so interested in the project we are doing with the youths of ‘Building Dreams for Peace’ affirms Obet. 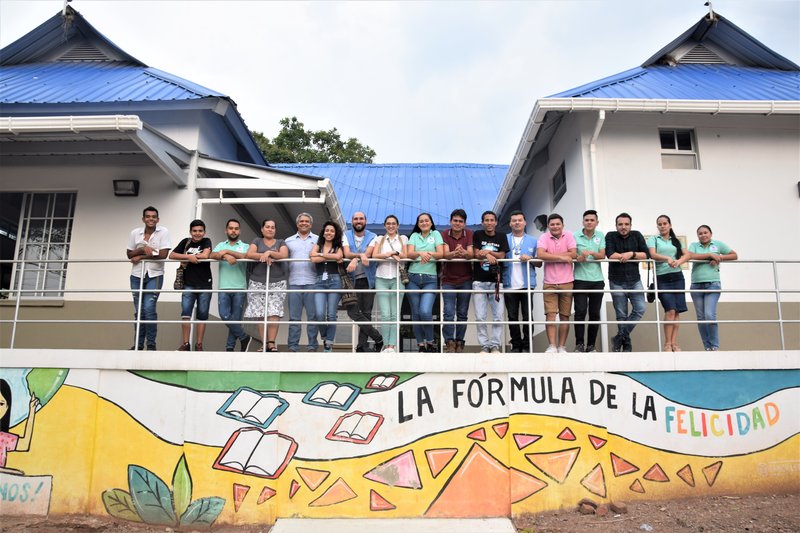 The idea of creating a cultural training school among ex-combatants and the community emerged last year, after the visit of the singer César López to the TART of San José de Oriente. There, Lopez noticed the interest of young people in music and offered to donate instruments with the accompaniment of the UN Verification Mission.

With this idea, at López's suggestion, it was linked to the Cesar department Development and Peace Program, which generated channels of dialogue with the community, institutions, and with FARC ex-combatants with whom work began on a formal project. Thus began the meetings in the office of Cesar's Development and Peace Program, in the office of the United Nations Verification Mission in Valledupar, in the TATR of Tierra Grata and in the Library of San José de Oriente, in La Paz, Cesar, where a relationship between the young people was formed. 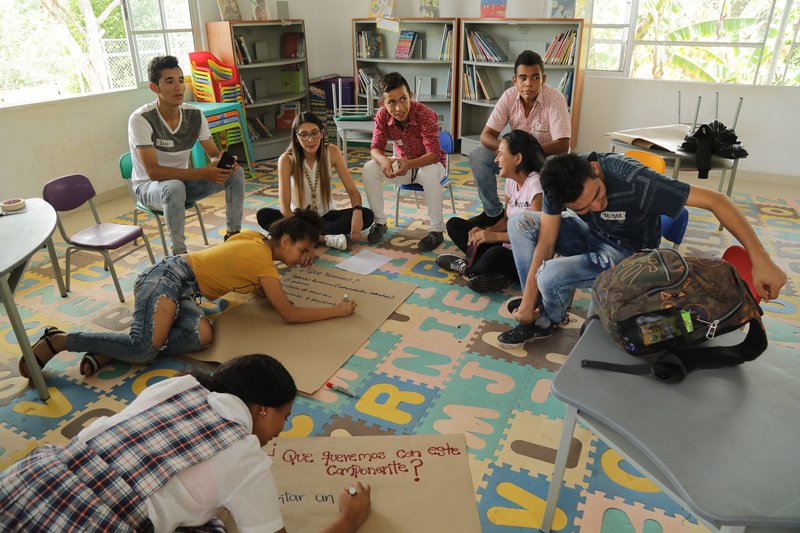 "Although initially it was thought to create a music school in the TATR, the idea was shared with some friends and institutions, and with the youth of the community of San José de Oriente and the youth of FARC, and thus began to have an added value and was adapted to the needs of the communities," says Amaury Padilla, director of the Development and Peace Program of Cesar.

After several workshops, the idea became a project and today is the flag of these young people who are in the task of seeking funding with the idea of ensuring the operation of the school for at least one year and start their workshops immediately with the resources they have at hand. 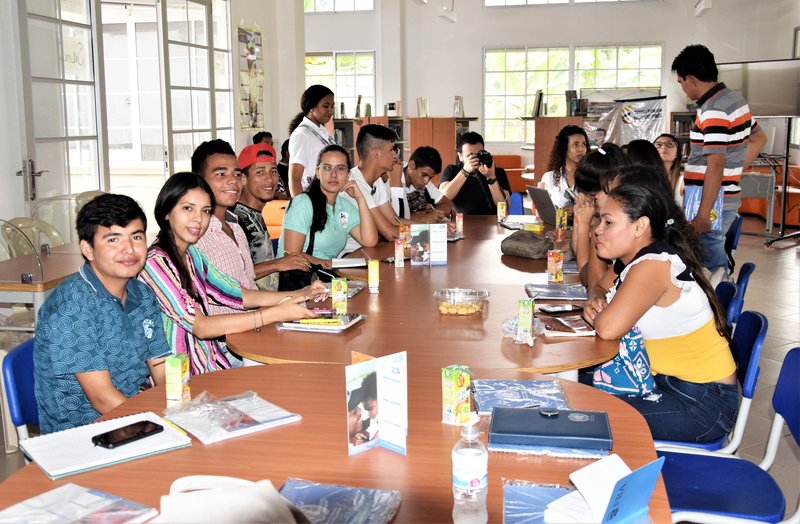 Although 'Sounds of Peace' does not yet have a headquarters, it already has a group of young people offering workshops to the community and working as a team with the desire to contribute to peace. This project is accompanied by the United Nations Verification Mission and the Cesar Development and Peace Program and has as allies the local officials of the Office of the High Commissioner for Human Rights (OHCHR), the Truth Commission, and the Agency for Reintegration and Normalization (ARN).