Access to music lessons for the children of Tierra Grata was achieved by the youth project Sounds of Peace (Son de Paz in Spanish). The youth involved in the project are in the process of reincorporation into civilian life from Tierra Grata, in Manaure, Cesar, as well as, youngsters from the village of San José de Oriente, populated, for the most part, by victims of the armed conflict. They work together, along with the UN Mission, towards reconciliation through art.

“Being able to teach children and adults who are enrolled in the programme how to play a musical instrument in the town is quite exciting because this is what we dreamed of.  Helping people leave the conflict behind them and have a joyful future”, said Lesly Anakary Guzmán, a young woman from the former Territorial Area for Training and Reintegration (TATR) of Tierra Grata, who is a member of the youth group Sounds of Peace. Last Thursday, together with the United Nations Verification Mission, this project was featured in the “Let’s sing another history” (Cantemos Otra Historia in Spanish), an initiative for peace and reconciliation in Cesar.

“Being able to teach children and adults who are enrolled in the programme how to play a musical instrument in the town is quite exciting because this is what we dreamed of.  Helping people leave the conflict behind them and have a joyful future”.

During the event, which was attended by Cesar’s Program of Development and Peace, the Agency for the Reincorporation and Normalization (ARN), the UN Mission, and the municipalities of Manaure and La Paz, among others, the music programme of the Sounds of Peace Project was inaugurated. This will allow children and teenagers from Tierra Grata and San José de Oriente, a township in La Paz, access to free music lessons with a focus on rights and peacebuilding.

Duvan Suárez Bohórquez, from the Building Dreams Towards Peace Foundation, which represents the Sounds of Peace project’s community component, explained it is not only about teaching students to play an instrument but to bring two communities closer to reconciliation. “It is about giving a helping hand to this territory that has lived through conflict; that has seen deaths and borne the horrors of a meaningless war. That is why it brings immense joy to see how two communities come together to work towards the same goal - constructing peace through culture, leaving aside what we went through and which we only want to be a memory of the past”, he added.

Sounds of Peace is a youth initiative, led by the youngsters from Tierra Grata, populated mostly, by people in process of reincorporation, developed alongside the youth from San José de Oriente, in La Paz, populated by victims of the armed conflict. This project was established in 2019 to work towards reconciliation, inclusion, and combat stigma through art and culture. 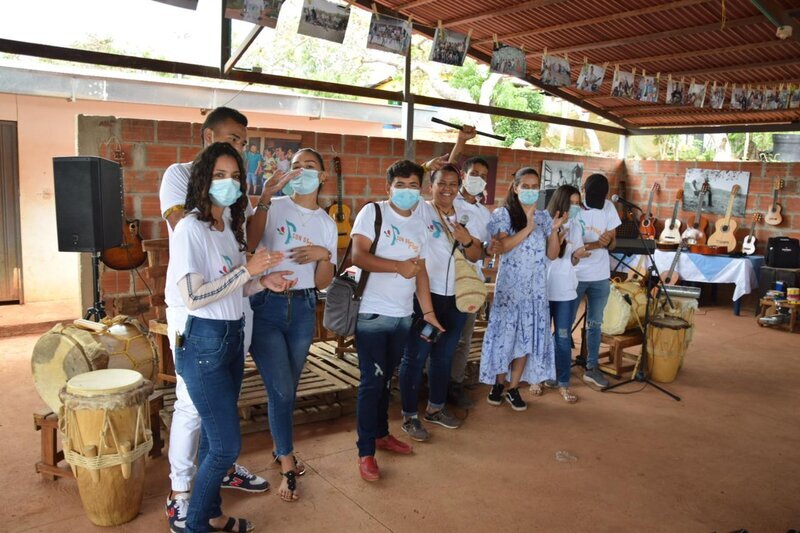 To support the project, the UN Verification Mission provided guitars, pianos, bass drums, bagpipes, flutes, and other musical instruments that were donated during the joint campaign ‘Let’s sing another history’ in which musician Cesar López’s 24/0 Foundation, Caracol Radio, and the company Envía also participated. 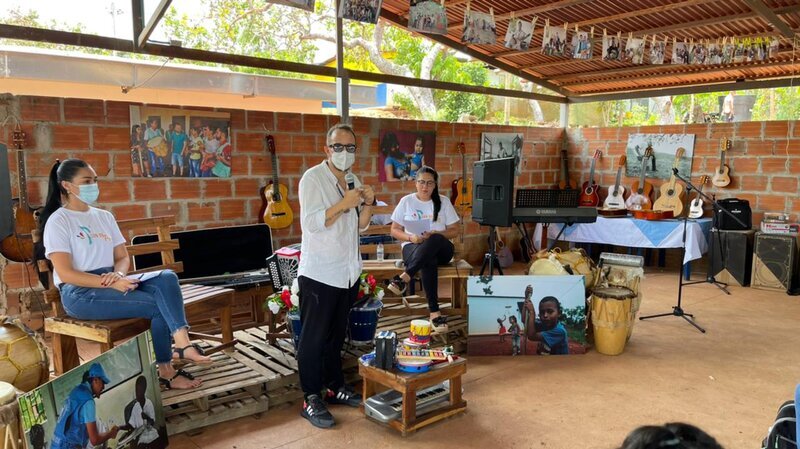 The campaign, launched before the Covid pandemic, called for all of Colombia to donate musical instruments to communities and artistic groups in rural and isolated zones affected by violence.

Hugo Tighe, Deputy of the UN mission’s regional office in Valledupar highlighted that “These instruments are a symbol of peace, and they are here thanks to the efforts of these youngsters who, leaving any stigma aside, work collectively to create a better society. Their job is possible thanks to the Peace Process, which allows us to dream of a new generation of children who live far from war”. He stressed that working for and with the youth, is one of the UN’s main priorities and, therefore, the UN Mission had been supporting this project since its inception.

"Their job is possible thanks to the Peace Process, which allows us to dream of a new generation of children who live far from war”. 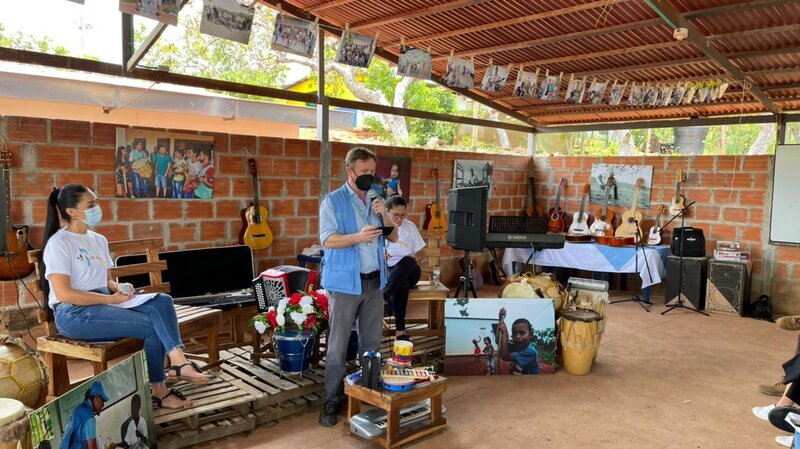 The Agency for Reincorporation and Normalization (ARN) delivered musical instruments and professional audio systems, through an agreement with the International Organization for Migration (IOM) and with the support of the National Reintegration Council (NRC). 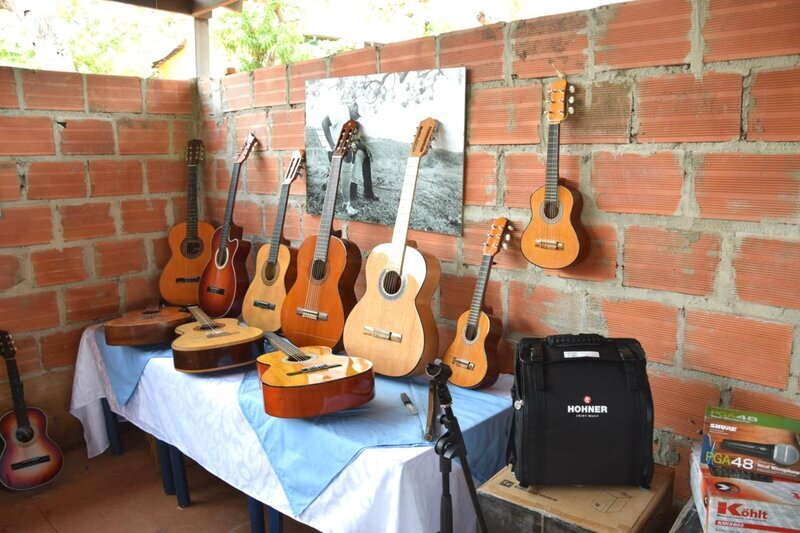 The ARN coordinator in Cesar, Angélica Agámez, expressed that “it is quite satisfying to work on these initiatives to strengthen the society, the harmony but, above all, to build bonds of trust that not only benefit those who give up arms, but also the surrounding population”.

The goal of this agreement is to strengthen the social structure at the  community level in 30 municipalities of the country. This is achieved through the collective and participative identification of community needs and potential which can contribute to the construction of community reincorporation agendas that will benefit former combatants and all populations in the territories where the process of reincorporation is currently taking place.

The music lessons will be held twice a week, thanks to the support of Manaure and La Paz municipalities, which made sure they had teachers who could start the training process. The project, which is not fully funded yet, works for the construction of peace through the consolidation of youth leadership. It identifies spaces for youth to gather and learn new skills, reconstruct memory, social structure, and build environmental awareness for the development of communities through art and culture.

The project seeks support from musicians in the  Caribbean region, who would want to use their time and skills to teach the children not only to play an instrument but also to share their stories of success - be inspirational examples for these youngsters, builders of peace. 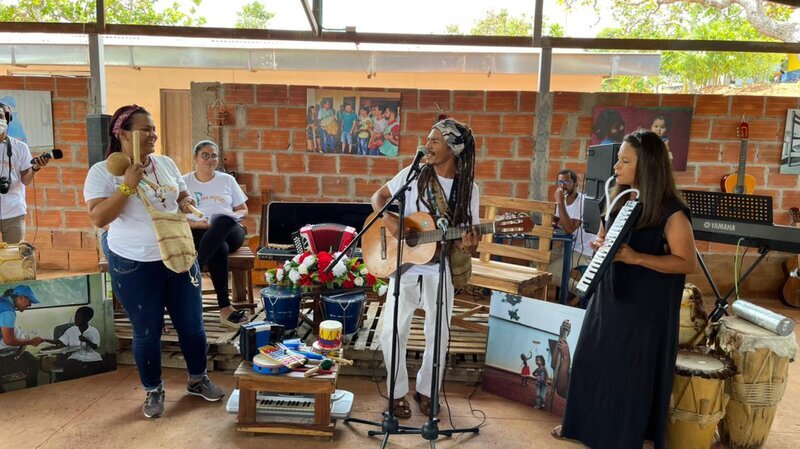