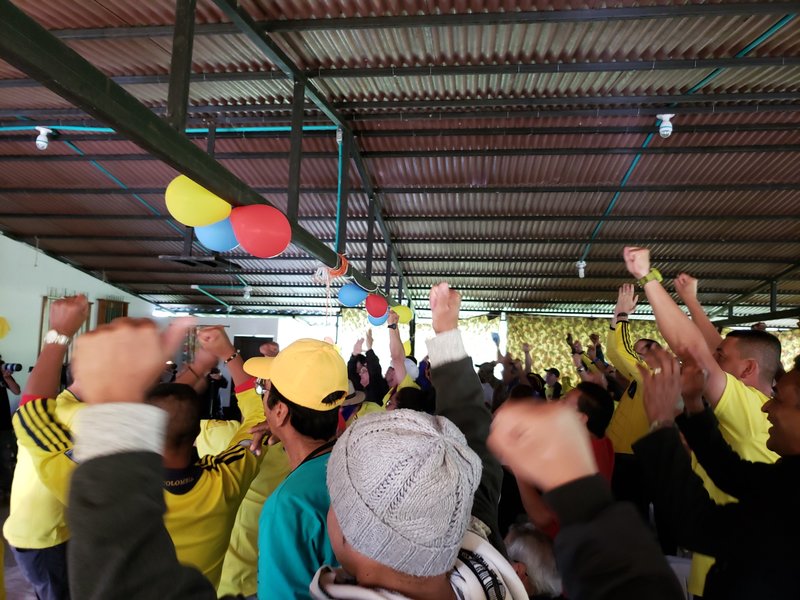 The celebration of Juan Fernando Quintero's goal in the Colombia-Japan match of the 2018 World Cup, was very long and resounding. For the first time in history, former combatants from FARC and the AUC, victims of the conflict, the community and the Security Public Forces watched a football match together at the community room of the Territorial Area for Training and Reintegration in the municipality of Dabeiba, Antioquia. While the game, which ended in a 2-1 loss for Colombia, did not produce the desired result for fans, football became reconciliation and for a few seconds everyone jumped, hugged each other, shouted, clasped hands when celebrating the only goal Colombia scored. That same scene was imagined 20 years ago by the filmmaker Sergio Cabrera when he shot the film ‘Golpe de Estadio’.

Last June 18 and 19, utopia became a reality and Llano Grande was the protagonist of “Golpe de Estadio 2”: Football for Reconciliation, an event that emerged from the ex-combatants and the victims from the conflict with the support of ‘Aulas de Paz’, Colombian Government, the Antioquia Reintegration Table, the UN Verification Mission in Colombia, UNDP, IOM, the International Center for Transitional Justice, among other actors.

"When I was thinking about making the movie 'Golpe de Estadio', 20 years ago, to imagine on a peace process was utopian. To think that guerrillas, police and paramilitaries were going to sit in a room to watch a football game was that, a utopia and for that reason in the film we clarified that the story was not based on real events", affirms Sergio Cabrera. He explained that the film was about a truce agreed by a FARC-EP front and a Public Force command to watch the 1994 World Cup match between Colombia and Argentina on the only working television in the community. "Now that warning message on the film loses its meaning because in Llano Grande it became in a reality", add Cabrera. 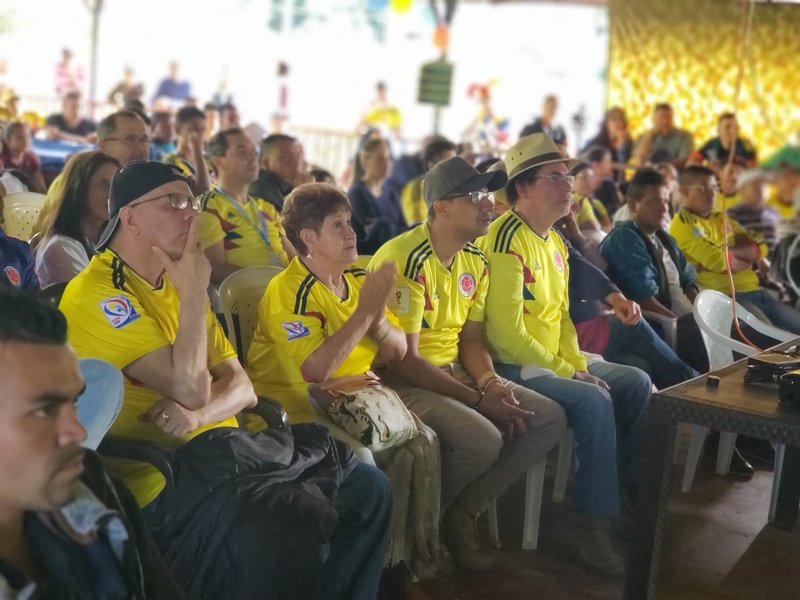 Teresita Gaviria, victim of the conflict, sitting in the middle of ex-combatants from Auc and Farc. All together watching the Colombia-Japan match at the 2018 World Cup Russia. Photo: Elizabeth Yarce.

Despite the unfavorable result for Colombia, all the attending people celebrated by the fact of being there. "We can move forward, as a Colombian I feel taking a step forward for hope. I never imagined being here" expressed Teresita Gaviria, a victim and a representative of the Mothers of La Candelaria (organization compose by relatives of people murdered by different armed groups). During the match, Teresita was sitting in the middle of the room and her side ex-combatants of Farc and Auc and an ex-guerrilla of the Eln.

‘We, ex combatants, came up with this idea and many others joined us" said Iván Roberto Duque "Ernesto Báez", ex combatant from paramilitary group (AUC). The message we send to Colombia is that we want to reconciliate, not only in football, but in all scenarios. Peace moves so many emotions, it is able of making fiction into reality" added Pastor Alape, a former Farc combatant.

The inhabitants of the local community were amazed at what was happening there. But in a certain way they understood that it was happening because of the Peace Agreement. A reconciliation process that goes beyond football has been brewing since last year: victims, community, ex-combatants of Farc, security public forces and Government, work hand in hand to strengthen the social fabric of this area.

Gonzalo David Úsuga, president of the Community Action Board of Llano Grande was there during the game. "We are very united here with Army, Police, Farc and we peasants. The community is also promoting sports", he added.

The night before the World Cup match, the community of Llano Grande met with the director of “Golpe de Estadio” movie, Sergio Cabrera; the actor Nicolás Montero, well-known writers and photographers to watch the movie. 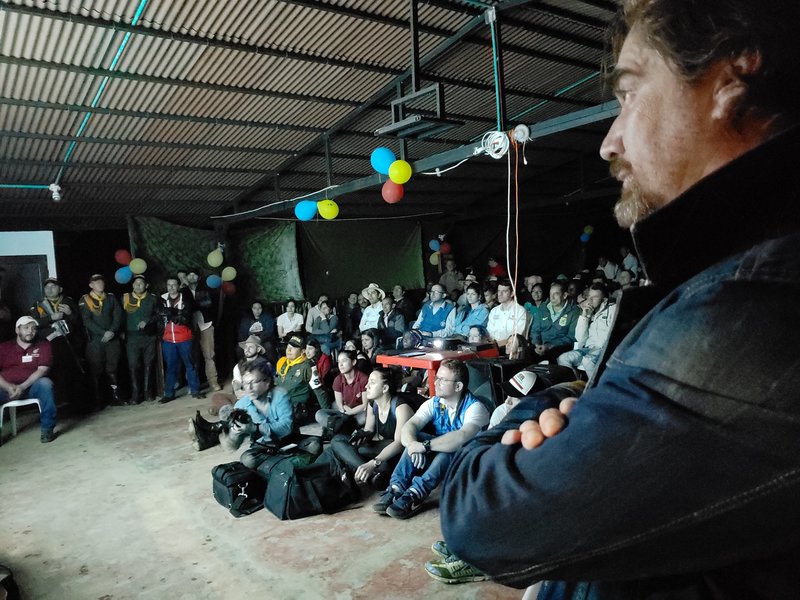 The film also united the community that with astonishment watched the scenes and even celebrated the goals of that historic 5-0 of Colombia vs Argentina in the 1994 World Cup.

At the end of the movie, the film director, ex-combatants, victims, athletes, community, writers participated in a gathering in which reconciliation was insisted on as a way to peacebuilding. Football and art are one of the ways, said the participants. 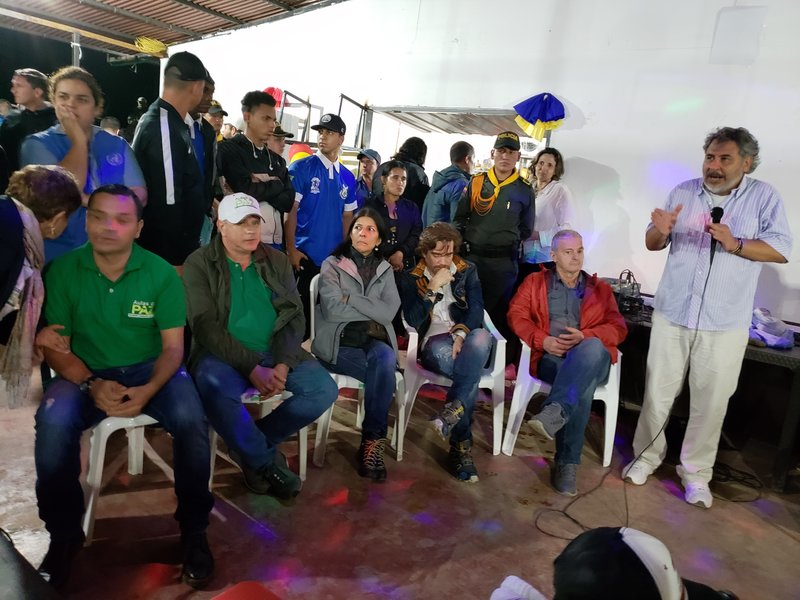 Carlos Iván Lopera, from UNDP, talks about football and reconciliation with several guests at the meeting, ex-combatants and victims. From right to left: the director Sergio Cabrera; the actor Nicolás Montero; the writer, Patricia Nieto and the demobilized of Auc, Rodrigo Pérez "Julián Bolívar". Photo. Elizabeth Yarce.

The day lasted until 11:00 PM and the next day they all got up early to watch the Colombia-Japan match. In spite of losing two goals against one, the assistants agreed that a space of conversation was gained.

"Being able to be in this reconciliation event and being able to see the commitment that the Farc have in the reintegration process is very important for us because it allows us, in my case, to face that part that I have always claimed: is not only the political issue, but also the dialogue with victims at the territories", said Yolanda Perea, a victim of Farc, who arrived from Chocó to the meeting.

The football match that everyone won 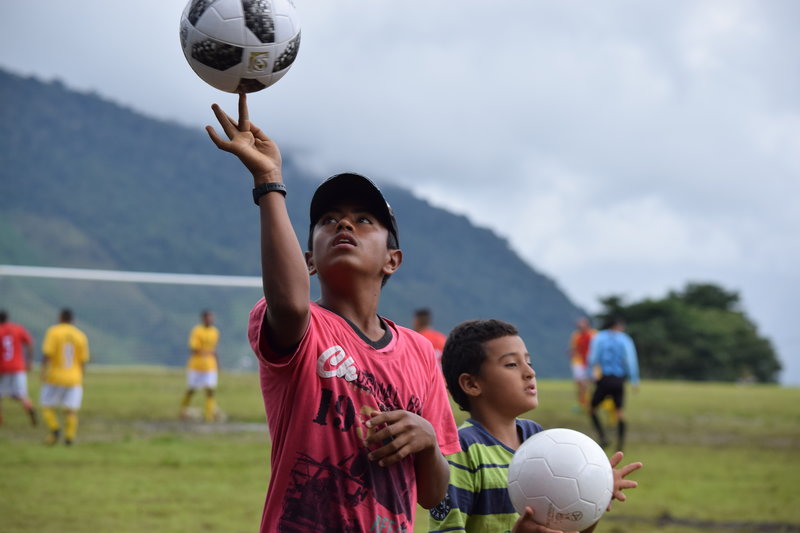 Football united an entire community around reconciliation. The children received balls from the private sector which were made by victims of the conflict in the municipality of Granada. Photo: Jennifer Moreno.

A team of 15 young people from the NGO “Semillas de Vida y Paz” of Medellín arrived on Monday to play the reconciliation match in Llano Grande. Another football team made up of professionals Colombians football players, such as Samuel Vanegas, Diego Toro and John Cordoba, arrived on Tuesday, all of them convened by the former DIM technical director, Víctor Luna, now in charge of Football and Coexistence program of the Mayor's Office of Medellín.

Another group of victims of the conflict came from the municipality of Granada, east of Antioquia, with soccer balls made by them with the support of the company “Gran Gol” to give to children of the village and transmit a message of hope.

The representatives of Colombian Government, the Government of Antioquia and the Deputy Head of the UN Verification Mission in Colombia, Jessica Faieta, also joined the event at Llano Grande, who found a united community around football and community development.

"Sport is a unifying element. Having today actors who years ago were facing an armed conflict, having together the victims of that conflict and government institutions is a very important step in the reconciliation of Colombia" affirmed Faieta. 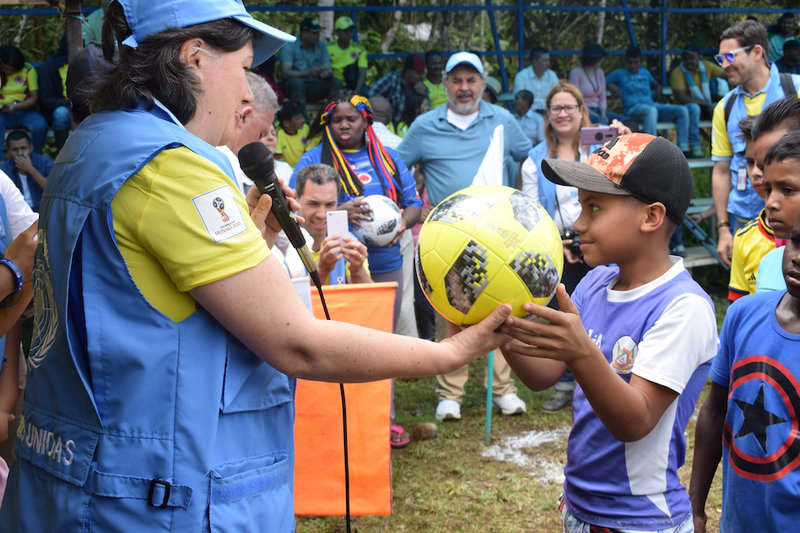 "Colombia lost the game, but it has won a lot in the sense that football has been an option for all these actors to join for peace" Mrs. Faieta added.

At 11:15 in the morning the football game for reconciliation began. On the team with a blue shirt played the Farc ex-combatants, police officers and members of the community. In the other team, with a green shirt, played professionals Colombians football players.

The Colombian National Anthem sounded as dozens of people held the great flag of the Territory of Peace. In the tribune there was a party while at different points around the court families came to observe the event.

"Come on Llano Grande", the audience shouted as the music played. Football was a party even though the local team was losing. In the end the result was 4-2, in favor of the visitors.

“Today, we all won. The important thing is that it was shared with the people and this helps to build peace" said the former professional player, Gerardo Vallejo.

"We all integrate as human beings. We are correcting mistakes we made in the past and now we are doing everything we can to be better people" affirmed Alexánder Córdoba, former Farc combatant.

The second half of the match was played by the Llano Grande team and the team of the NGO “Semillas de Vida y Paz”. "This has been a great experience for me. I think there is no rancor in my heart against anyone and not feelling it is what will help us to move forward” stated Edwin Rivera who is a victim of the Farc. Like his teammates, with the help of professional player Willington Cano, he has experienced reconciliation through football in the neighborhoods of Medellín.

At the end of the match, everyone received a medal that symbolizes reconciliation. "We are having a great opportunity to meet as Colombians. Colombia won this match”, affirmed Willington Cano, director of the NGO “Semillas de Vida y Paz”. 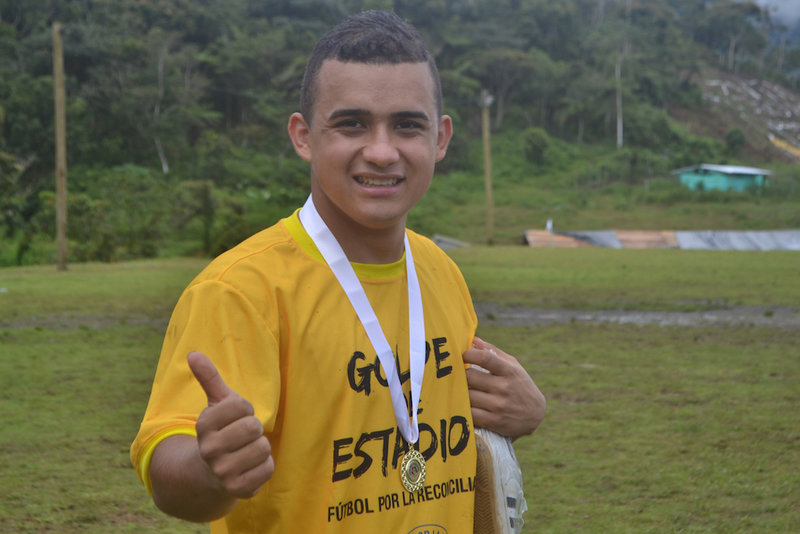