The excitement of experiencing soccer at the stands of a sports stadium was a dream for ex-combatants in reintegration and their families. This story was possible thanks to the Peace Agreement.

A group of 40 former FARC combatants, 20 of their relatives and 20 residents of the community of Llano Grande, Dabeiba, for the first time, experienced a Colombian professional league match - Atlético Nacional vs Águilas Doradas de Rionegro - with some 24,000 other spectators at the Atanasio Girardot Stadium in Medellín city. 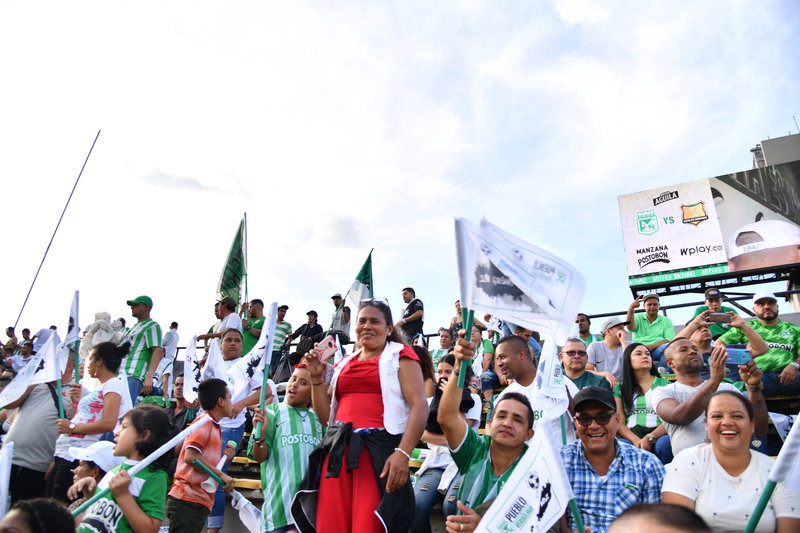 During the game, the community of Llano Grande cheered the game with chants and white flags. Photo: Elizabeth Yarce.

This visit was possible thanks to the efforts of young people that are members of Pueblo Verdolaga, an organization of soccer team supporters. They knocked on doors to introduce their “First time at the field” initiative and secured support for ex-combatants to visit the stadium and join cultural activities throughout the city. 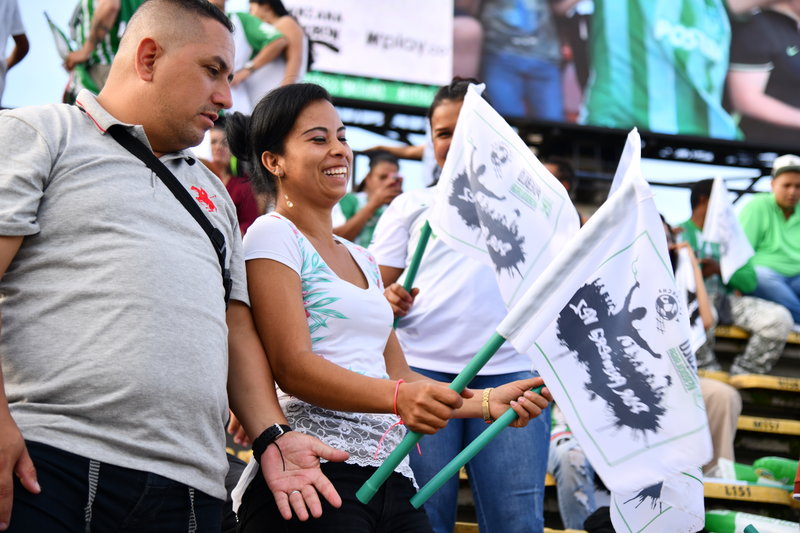 Tears of joy marked this moment for many former combatants in reintegration as they sat at the north stand of the Atanasio Girardot stadium. Photo: Elizabeth Yarce.

For three days, the group visited the stadium, comuna 13 neighborhood, Explora Park, Botanical Garden, House of Memory Museum, metro of Medellin, University of Antioquia, all the activities were new for the group.

“Before the signing of the agreement, we managed to listen to the matches on a small radio, and I always imagined what a stadium would look like. For twenty years we had never been inside a stadium,” said Oscar Lopez.

“When I got to the stadium, I thought it was a dream. My heart was jumping out of my chest. I felt like a real fan, and I couldn't believe it when they scored the goal,” he added. 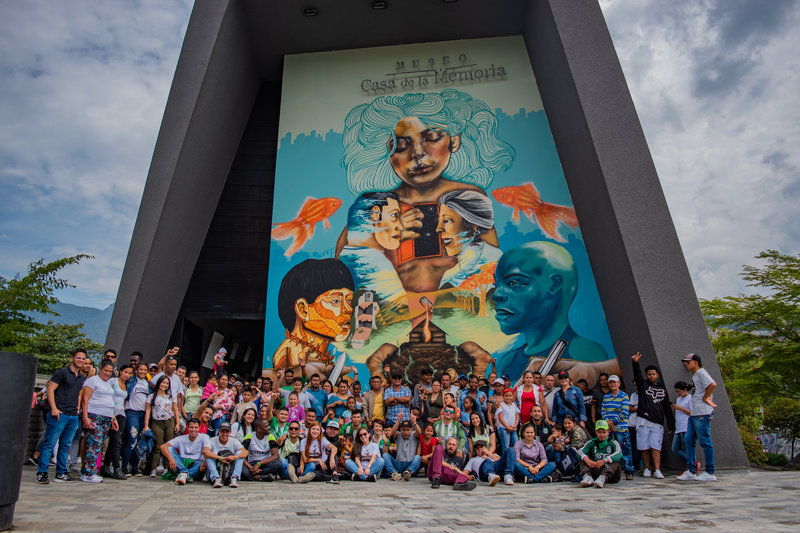 Visit to the House of Memory Museum in Medellín, where they learned about the historical memory of the armed conflict in Antioquia. Photo: Colectivo Desde el 12

Luis Arturo Garces, one of the leaders of the former Territorial Area for Training and Reintegration, explained that these activities bring people closer to the world. “We are getting to know the cities and towns of Colombia, this is all new to us,” he said.

Carmen Cardona, a community leader and victim of the conflict was also part of the delegation.  “I believe, love, forgiveness, and peaceful co-existence are the path for peacebuilding. It is important to share all that is learned and the processes with the community to create greater opportunities,” she highlighted.

Pueblo Verdolaga traveled with a group of 65 members from diverse professional backgrounds and representatives of various organizations to the former TATR in Dabeiba to attend a festival about soccer culture on 7, 21, and 22 September. The last two events were organized by the UN Verification Mission in Colombia as part of the celebration of the International Day of Peace. 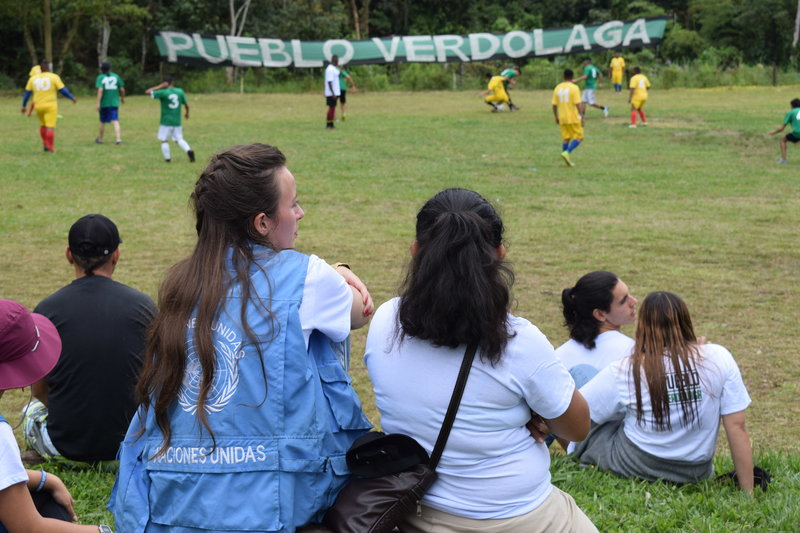 “The community enjoyed a short football tournament and workshops on photography, theater, art, and gender. Following the ex-combatants participated in a special activity with the team of the House of Memory Museum. They celebrated the inaugural exposition of their paintings and presented a play they prepared at the TATR,” said Bryan Gonzalez from Pueblo Verdolaga.

“Football is one of the main agents for social change and has proven to be key for individuals in reintegration. It brings people together and puts aside any prejudice,” said Juan Esteban Mosquera from the same organization.

“The first time at the field” was born four years ago with the idea to bring football to populations that historically did not have the opportunity to attend a sports event. In the beginning, it focused on taking children and senior citizens from surrounding neighborhoods and low-income families to the Atanasio Girardot stadium. However, it grew to the point that the seats for the organization’s members were also shared with homeless people.

“Sports and in this case, football are important tools for reconciliation,” said Francesc Claret, Head of the Medellin regional office of the UN Verification Mission in Colombia.

The organization is planning to repeat these activities with other former combatants in different regions of Colombia. This event was supported by the Agency for Reintegration and Normalization (ARN), the Mayor’s Office of Medellin, Atletico Nacional soccer team, Management for Peace and Post-Conflict of the Governor’s Office of Antioquia, Proantioquia, the UN Verification Mission in Colombia, UNDP, FAO, Indeportes Antioquia, House of Memory Museum, Metro of Medellín, Explora Park, Botanical Garden, Joaquin Antonio Uribe, Redepaz, Viva la Ciudadanía, Alliance of Alternative Media (AMA), Colectivo Desde el 12, among other institutions. 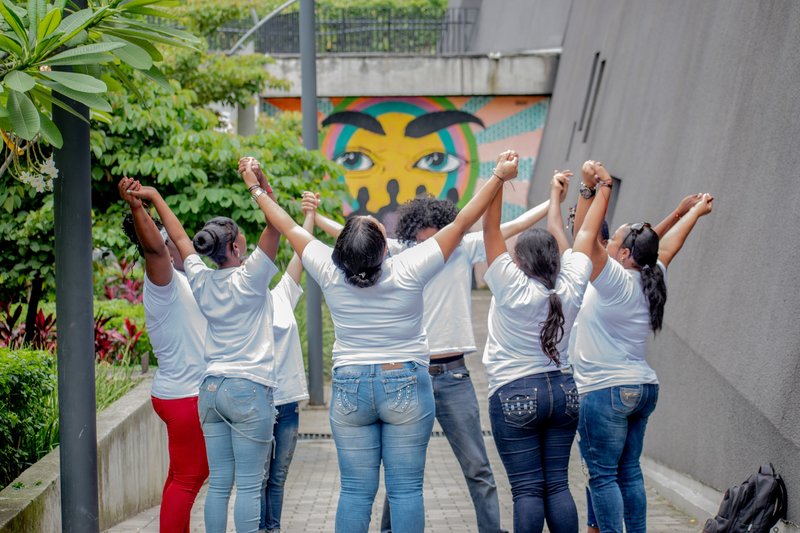 STATEMENT ATTRIBUTABLE TO THE SPOKESPERSON OF THE SECRETARY-GENERAL ON COLOMBIA