"This farm was recovered through the peace process; it is a farm inherited from my parents. To be able to be here is a victory in many ways," says Carol Aponte from the Gigante farm, in the village of La Alemania, in the community of San José de las Hermosas, in the rural area of the municipality of Chaparral, in the south of the department of Tolima.

After several weeks of planning, the UN Verification Mission in Colombia managed to support this reconciliation activity by bringing Ms Aponte together with a group of 14 former FARC-EP combatants (all appearing before the Special Jurisdiction for Peace (SJP), leaders representing the Amoyá-La Virginia indigenous community with a presence in the Cañón de las Hermosas and its Indigenous Guard, representatives of the Association of Indigenous Councils of Tolima (ACIT), and officials of a civil organization dedicated to demining humanitarian.

"This farm was recovered through the peace process; it is a farm inherited from my parents. To be able to be here is a victory in many ways". 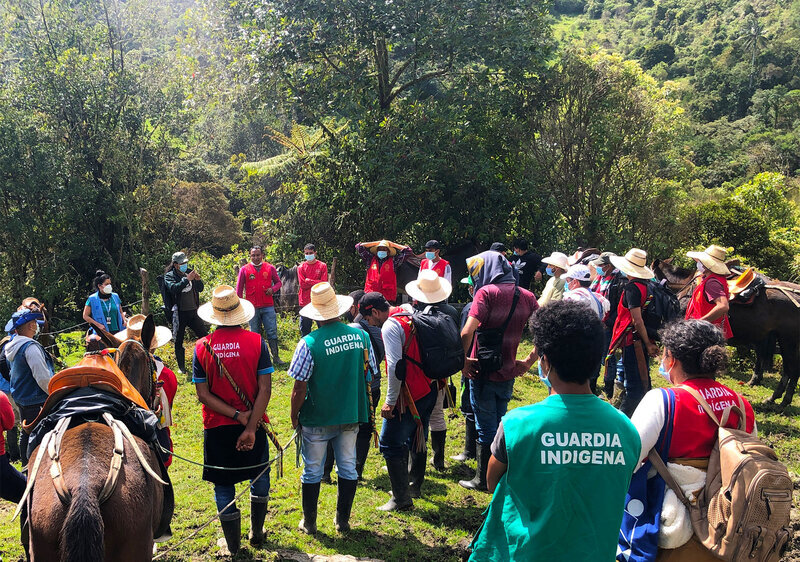 Participants in this activity included people in the process of reintegration, members of the Pijao Amoyá-La Virginia indigenous community, representatives of the Association of Indigenous Councils of Tolima (ACIT), members of the community, officials of a civilian organization dedicated to humanitarian demining and the UN Verification Mission in Colombia. Photo by: Héctor Latorre/UNVMC.

The purpose of the activity was to identify, with the information provided by the former combatants, possible areas with unexploded ordnance on the Gigante property and, also, to carry out a verification of the land with a UN Mission drone. Since the Aponte family was displaced two decades ago, the land was a base for the extinct FARC-EP and later a combat zone between the guerrilla and the Colombian military forces. 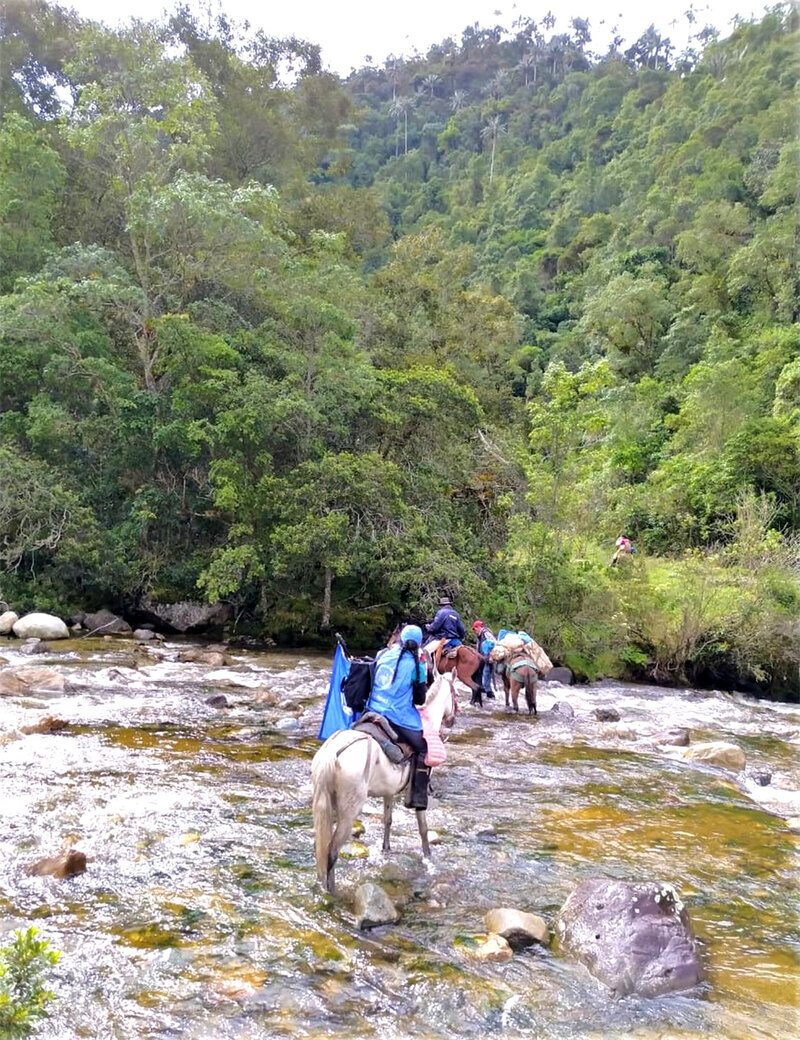 During the journey, which started in the village of San José de las Hermosas, in the rural area of Chaparral, Tolima, the group travelled several kilometres along the Amoyá river. Photo by: Christian Degasperi/UNVMC.

"I hadn't been able to return for 21 years. My family and I were forcibly displaced when I was six years old. Today's visit was very gratifying because we were able to return to these lands that had been lost a long time ago due to the conflict it was very emotional," says Carol.

This land was included in the prioritization of land purchases made by the National Commission of Indigenous Territories (CNTI) at the request of the Amoyá-La Virginia indigenous community to the National Land Agency to establish their reservation in this region. In a previous topographic mapping exercise, was found explosive devices in the area. As a result, the official entity has not been able to move forward in this process. 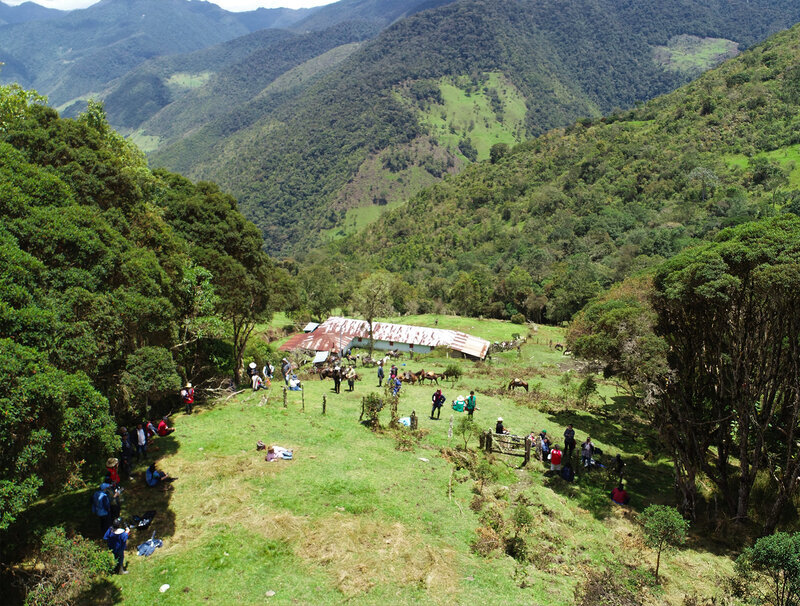 This is the Gigante area, where possible areas with unexploded ordnance, which were recurrently used in the armed conflict, were identified. Photo by: Catalina Ramos/UNVMC.

The group of former combatants involved in the activity had operated in this area for many years, making it possible to provide information on three points where unexploded ordnance may still be present. A civilian humanitarian demining organization will now determine how to proceed to identify and remove possible devices and declare the territory free of mines. This activity demonstrates the commitment of the FARC-EP former combatants to deliver crucial information to guarantee the integrity and life of the people living in the territory, as well as their responsibility to the provisions of the Peace Agreement. 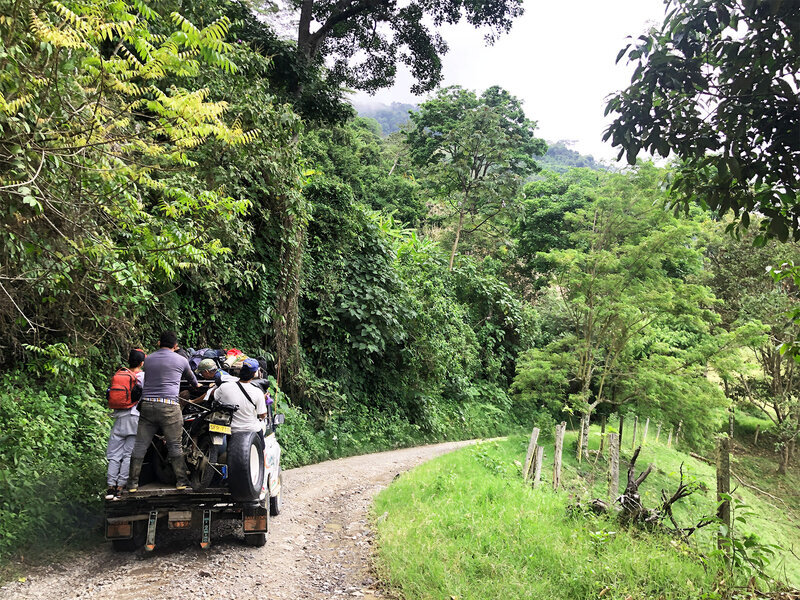 After years of conflict, the farmers of this region have returned to their agricultural activities and are grateful for the peace they are now experiencing in the countryside. Photo by: Héctor Latorre/UNVMC.

“This was a very harmonious activity. Everything went as planned. It is an important experience of how we support these efforts with the communities that need us to guarantee that they will not have any problems with traces of the conflict on these lands. That they will not be left with any aftermath of war, it was very spectacular,” said Gustavo Bocanegra, legal representative of the Asodipaz Association, Dignified Association for Peace, and a person in the process of reincorporation who had actions in this area of Tolima. 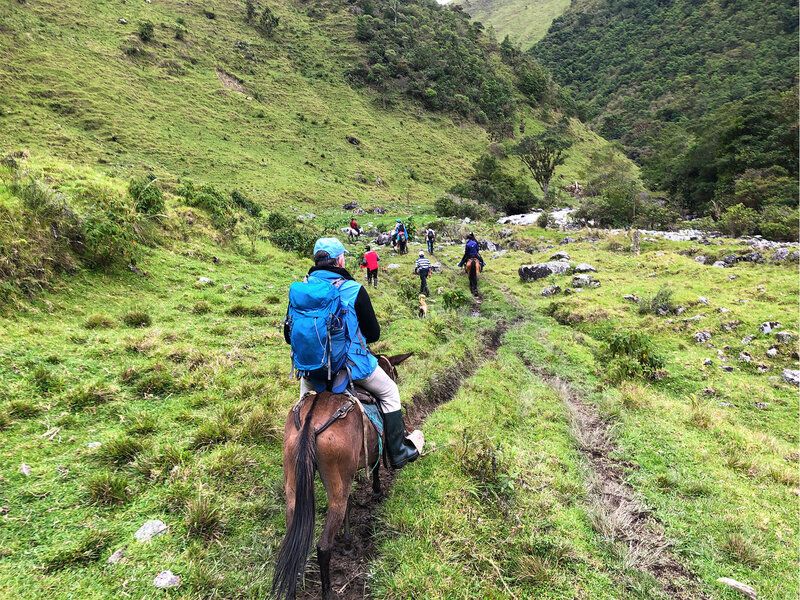 On foot and on horseback, nearly 40 people who participated in the activity went deep into the mountains of the Cañón de las Hermosas, an area that was the scene of fighting between the extinct FARC-EP and the Colombian military forces. Photo by: Héctor Latorre/UNVMC.

For José Roberto Quijano Muñoz, coordinator of the Indigenous Guard of the Amoyá - La Virginia community of the Pijao people, the activity represents "gestures of peace that have allowed us to build trust with a society that demands a lot of forgiveness, many acts of reconciliation for peacebuilding."

"This is the maturity of the agreement where victims and perpetrators have reflected and have reached a level of understanding that hating each other is not the solution, but the building of a stable and lasting peace based on accepting that we made mistakes. And to evolve as a society and to know the context in which we find ourselves.  We are now in the year 2021 and not in 1996 when these events occurred, and that will allow the construction of the forgiveness we are seeking in Colombia", concludes the leader of the indigenous guard, José Roberto Quijano.

"We hope that the purchase of the land can be materialized so that these communities settle here, bring progress and wealth. We understand that there are more than 80 families that need land to work, and that is a contribution to the first point of comprehensive rural reform", former combatant Bocanegra comments on what follows from now on. 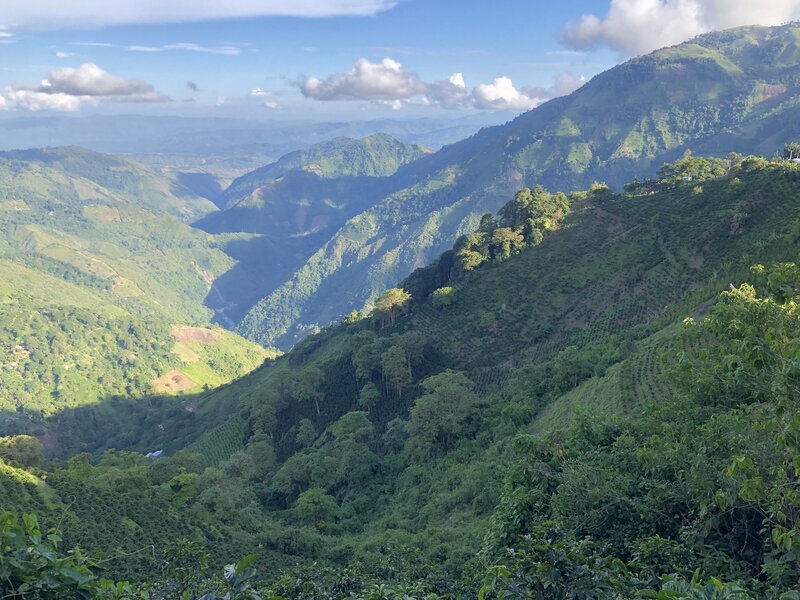 Coffee cultivations merge with native trees in the southern part of the department of Tolima, in the landscape of the Cañón de Las Hermosas.  Photo by: Héctor Latorre/UNVMC.

For Nieves Batres, head of the mobile team of the Bogotá Regional Office of the UN Verification Mission, these types of activities will be key for Colombia to advance in the reconciliation process after so many years of internal conflict.

“We hope that, as has been the call of the Secretary-General, the parties will continue to work together, with great commitment, like that of today, to protect and expand these achievements of the peace process. Furthermore, this demonstrates the great resilience of Colombians from these conflict-affected areas”, said Nieves Batres.

“We hope that, as has been the call of the Secretary-General, the parties will continue to work together, with great commitment, like that of today, to protect and expand these achievements of the peace process.

The UN Verification Mission will closely follow this process, supported by the Tripartite Mechanism for the Supply of Information on Contamination by Explosive Devices in Colombia, within the framework of the reconciliation process experienced by many territories that have been affected by the conflict violence. These activities are financed with extrabudgetary funds from the UN Department of Political Affairs and Peacebuilding.