Children of peace in the Colombian Caribbean

Children of peace in the Colombian Caribbean

As a tribute to Samuel David, the Wayúu baby of TART’s Tierra Grata in Cesar, who died after some violent events. Two mothers, former FARC-EP combatants of the Wiwa and Bari indigenous ethnic groups, agreed to share their children's stories. In the Colombian Caribbean, counting Samuel David, 62 boys and girls of former combatants have been born. In the country, this number could reach 500, without counting 258 pregnant ex-combatants.

At the exact moment, Maikel Iván was born, when he cried for the first time, and the doctor gave him to the nurse to be cleaned; Rosa Rodríguez started screaming. She shouted at them asking for the baby, and she attempted to get up from the surgery bed, while the nurse, from the other side of the room, also shouted at her to stay calm, to wait. “The doctor told me if I did not stay quiet, he wouldn't be able to close the Caesarean section, but at that time I couldn’t explain anything to him”; remembers Rosa, who by then, December 21st, 2018, already knew what it's like to lose a baby. She had four pregnancy losses, and that's why she was screaming. However, she also cried tears of joy because, to her, Maikel was a miracle.

Rosa tells this story from “Granja Nueva Colombia”; a farm located in Fonseca, La Guajira –near the Territorial Area for Training and Reintegration (TATR) in Pondores–, where she and about 40 ex-combatants plant banana, tomato, and spring onion. They sell the harvest at the schools of the town through the World Food Programme –WFP–, one of the UN agencies supporting the reintegration process. 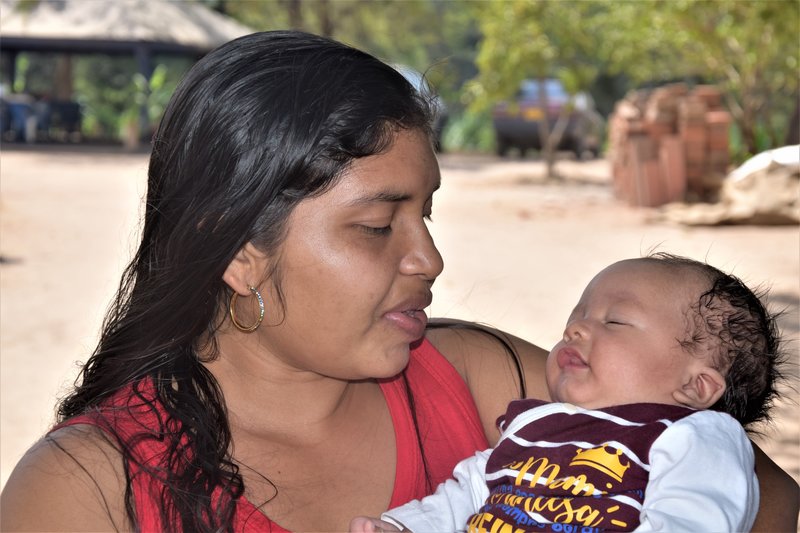 This woman, ex-Farc - EP combatant and member of the Wiwa ethnic group, who has just turned 40, was part of the guerrilla for 16 years under the alias of “Martha”. She started the process of transit into civilian life two years ago at the TART in Pondores, where to date 34 babies have been born, including Maikel.

The first time that Rosa was pregnant, she was 23 years old. She was somewhere at the Sierra Nevada de Santa Marta with a rifle in her shoulder and with barely one year as a member of Farc-EP.

She got pregnant because “medication did not arrive as the roads were blocked; there were many military checkpoints, and the contraceptive injection did not enter the camp”; says Rosa. This happened to her three times.

The fourth time was different. It happened in 2017, one year after the signing of the Peace Agreement when Rosa and her partner, Jorge Iván Churio García, an ex-combatant known as Elder and who also works at the farm, decided to start a family.  “I did not have any hope of being a mom anymore, But I got pregnant, and we decided to have our baby. However, I spontaneously lost the baby, the doctors told me my womb was very weak. I almost die because I suffered a heavy hemorrhage”. 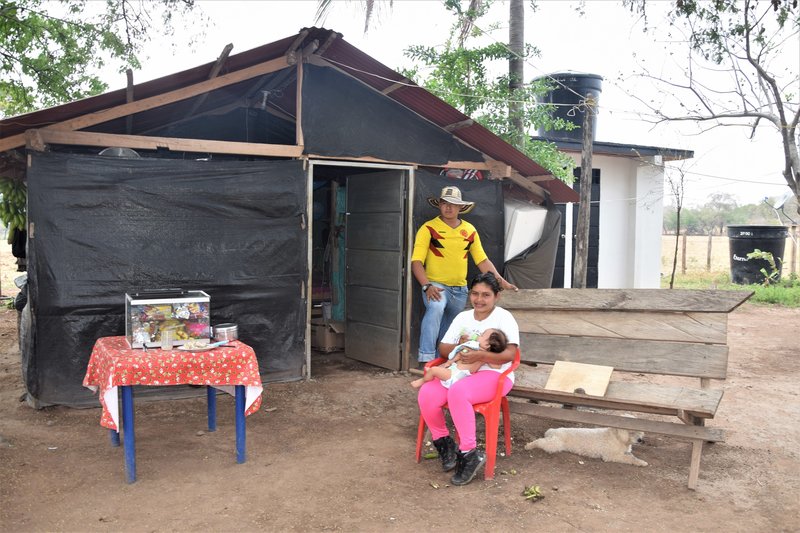 By that time, Rosa was already a member of the TATR Gender Committee, she oversaw the reproduction subject, and knew how delicate and painful was addressing this topic, overcome those losses and move on.

Jorge Ivan was excited about the idea of having a child. And Rosa, for her part, proposed to be a mother and began to get medical examinations to rule out illnesses. She knew that it was a difficult dream to came true as the probabilities were few. She feared the worst. That's why she cried so much the day Maikel Iván was born. 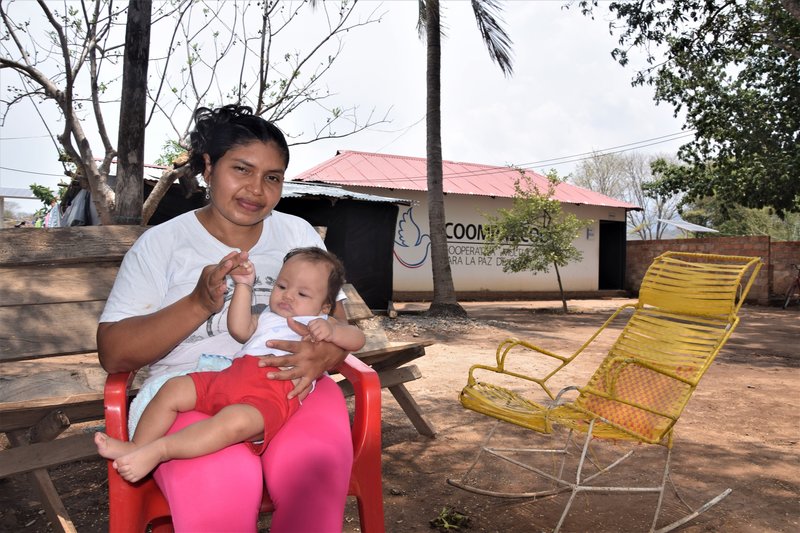 On that day, December 21st, 2018, at the surgery room of San Rafael Hospital in the municipality of San Juan del Cesar, Rosa finally calmed down. She could hold her baby for a few minutes, she was told it was a healthy boy, the doctor closed her C-section wound and she stopped crying.

Rosa says that the best stage of their lives began with the birth of Maikel. “There are still many frustrations, our future is still uncertain, but our will for peace and to take care of our family is unbreakable. Maikel is the greatest prize in my life, my first child and my opportunity to have a real family".

Such as Rosa’s case, hundreds of children have born in the TATRs around the country, but during the conflict, some children came to this world to be left under the care of friends and family meanwhile, their parents were in the jungle. These children returned, and now they are with their parents. This is Yari’s case and how she reunited with her mom, Yarledis Olaya.

Birth during the war and a baby during peace

The day Yarledis Olaya saw her daughter again, the girl did not recognize her. She couldn't do it because since she was 18 months old, her only mom was Ruby; the lady that raised her. That's why Yari, the girl, didn't recognize her real mother, the woman that was in front of her. She didn't know that Ruby was only taking care of her while her real parents were in the guerrilla.

Yarledis Olaya, known as Jackeline in the Farc (she likes to be called by that name) is a 34-year-old former combatant; member of the Bari ethnic group. She joined the guerrilla at a very young age, to which she belonged for 20 years. There she met her partner, who was also a member of the Caribbean Bloke of Farc-EP. There in the mountains was born the love between the two, aware that they could not have a family.

But then, and against all the odds, Yari was born under difficult circumstances with the help of a midwife. Even though her parents tried to keep her with them, they knew they couldn't keep her because “war was not for a little girl”; says Yarledis. That's why they asked Ruby, Yarledis partner's aunt, to look after her. 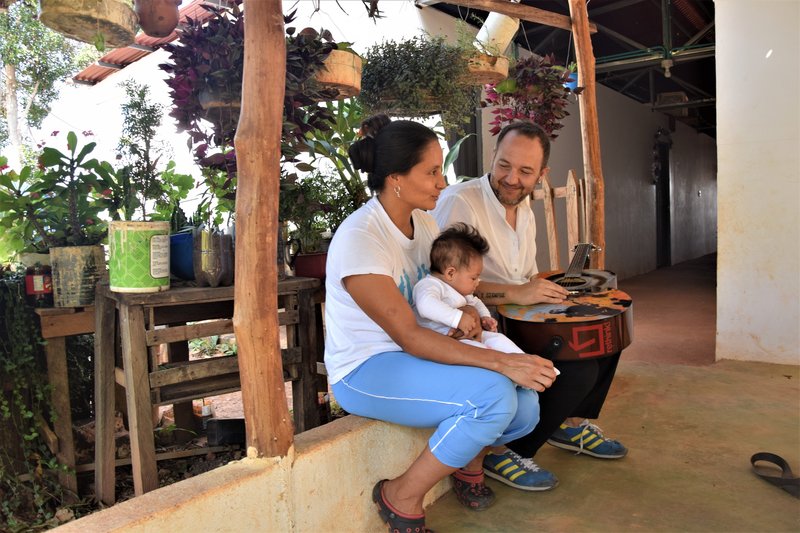 Yari left, and her parents remained with the guerrilla. When the Peace Agreements were signed, and combatants concentrate on what is known today as the Territorial Areas for Training and Reintegration; Yarledis and her partner came back for their daughter. However, the first encounter, in early 2017, was not as happy as they expected. "We were happy to see her, but she didn't accept me as her mother, because she didn't know who I was. She was seven years old, and she stayed with us for a few days, but there was no reconciliation. She left, I had to see her leave with a broken heart", recalls Yarledis.

In a second encounter, Yarí asked questions, such as: why did you leave me? Why were you in the jungle? "It's been a tough process for her to accept us as her real parents”; admits Yarledis. Today Yari is nine years old and, although she still questions what happened, little by little she has been reconciled with her parents.

Yarledis is the mother of two daughters, Yari and Jaquelin. "I had Yari in the war, and I had Jaqueline in peace," she says with a smile on her face. Today she lives with both of them and with her partner at the TART of Tierra Grata in Manaure - Cesar, where 28 children were born, including Yarledis’ daughters, after the signing of the Peace Agreement. Five of these babies, according to Farc figures, are indigenous.

Yarledis' second daughter, Jaqueline, who is 8 months old, came to this world in a different circumstance than her sister Yari. She was born on August 12th, 2018, at hospital Rosario Pumarejo de López, in Valledupar. With medical care that his little sister did not have and in the heart of a home that hopes to be far away from guns and war.

"I no longer have the worry I had with Yari, I do not have to separate from her anymore, I don't have that nostalgia for having to leave her, now I can live with my daughters, as it should be."

Today Yarledis is the president of the Community Action Board of Tierra Grata local community, in the municipality of Manaure, to which the TART formally belongs. Her husband works in the productive initiatives that are developed in the TART, and her eldest daughter goes to school in the urban area of the town. They have a new life and expect a much better one for their daughters.

"These two are my little seeds, and I hope that they will have better-living conditions than I had, that they will have an education and dignified life. I went through difficult things as a child, but I'm happy because I think my daughters won't have to go through the same thing, they'll have a better life thanks to the peace agreement”. 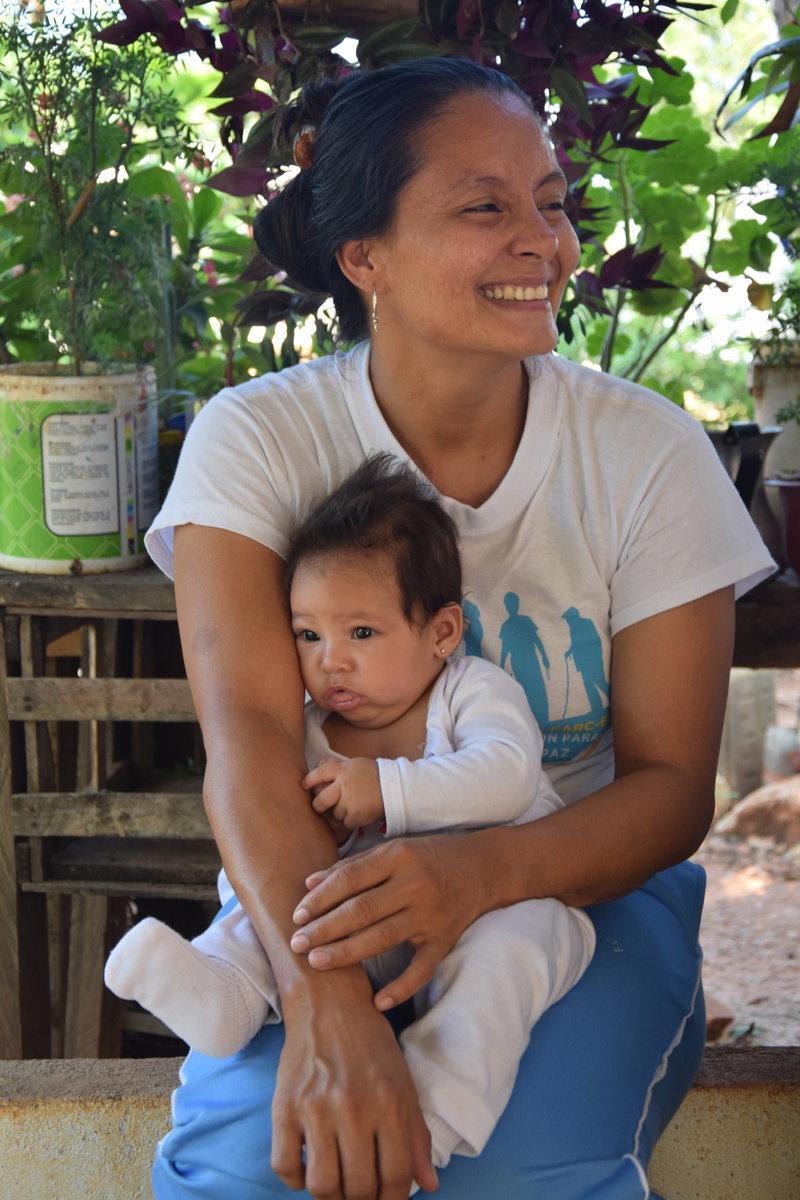 Since the signing of the peace agreement, 62 children have been born in the two Caribbean TARTs, Pondores, and Tierra Grata. There have also arrived brothers, sisters, mothers, fathers, and cousins who today live with the ex-combatants. And children who, like Yari, had left after the war and now start a relationship with their real parents. This is why, to a large extent, the population of these two TATRs has doubled in the last two years. The family, without a doubt, has given them roots, a hope for a better future and has strengthened their decision to continue their reintegration process.