To build memory, women from Urabá and Bajo Atrato shared their experiences in post-conflict

To build memory, women from Urabá and Bajo Atrato shared their experiences in post-conflict

More than 40 women ex-combatants and social leaders met on 7th-8th December at the former Territorial Area for Training and Reintegration (TATR) in Brisas, Carmen del Darién, to talk about their experiences of life in the post-conflict. These were moments filled with feelings of sadness, joy, and the illusion of living in a country free of conflict. 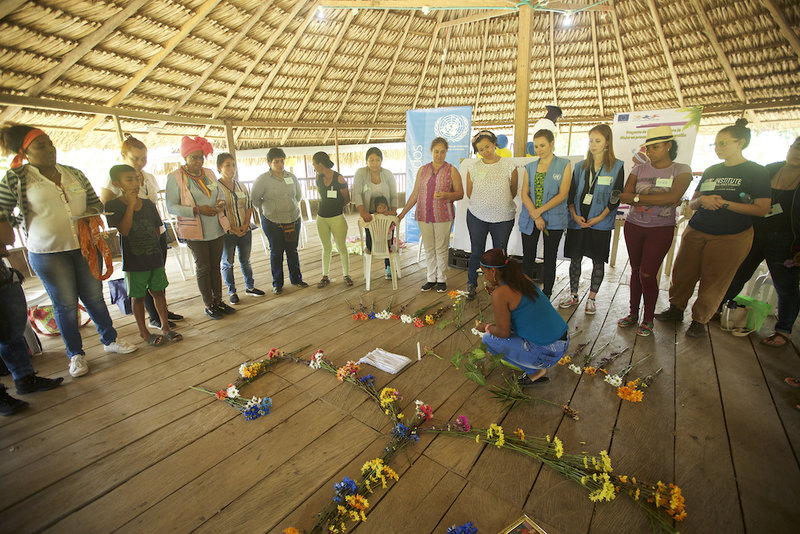 Claudia Motato does not regret having been a guerrilla. What she does regret deeply is that because of the decisions she made in her past, she didn't have time to raise her daughters.  Her life, like the lives of other women who have suffered from the armed conflict, is full of pain, persistence, and resilience.

During the 'Meeting of women leaders and former combatants in Urabá-Bajo Atrato,' held at the TATR in Brisas, Carmen del Darién-Chocó, Claudia told that she was in prison for rebellion and thanks to the Peace Agreement, she has been able to recover the confidence of her three daughters. Claudia is grateful to be alive, to have a job, and to have the opportunity to participate in meetings like this one, where it's about seeking the truth of what happened during the conflict.

Stories like this, of difficulties and resilience of women in the old ETCR, motivated the UN Verification Mission to promote a space where different groups of women could meet and recognize each other, as well as diagnose risks to their safety and identify actions of self-protection and care. It is the first meeting of this type to be held in Urabá and under Atrato in Choco, and which had significant support from the Commission on Truth, Coexistence and Non-Repetition, the Agency for Reintegration and Stabilization (ARN), the Kroc Institute, Popular Cultural Action and COMUNAGRO. 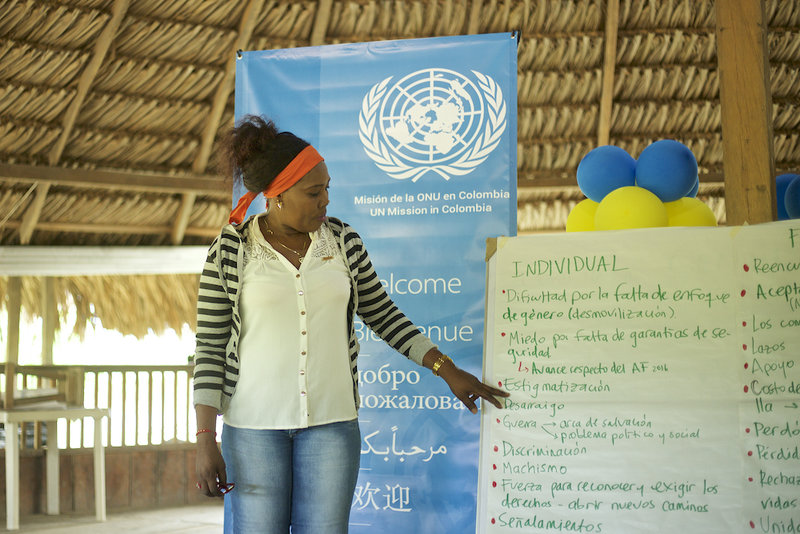 The more than 40 participants came from Mutatá, Dabeiba, Apartadó, Riosucio, and Jiguamiandó. However, "many women cancelled at the last minute for fear of travelling to the former TATR, which reaffirms the vulnerability of women to violence. This situation limits their participation in spaces designed to dialogue about their self-protection and care," affirmed Isabel Kawka, verification officer of the UN Verification Mission in Apartadó. 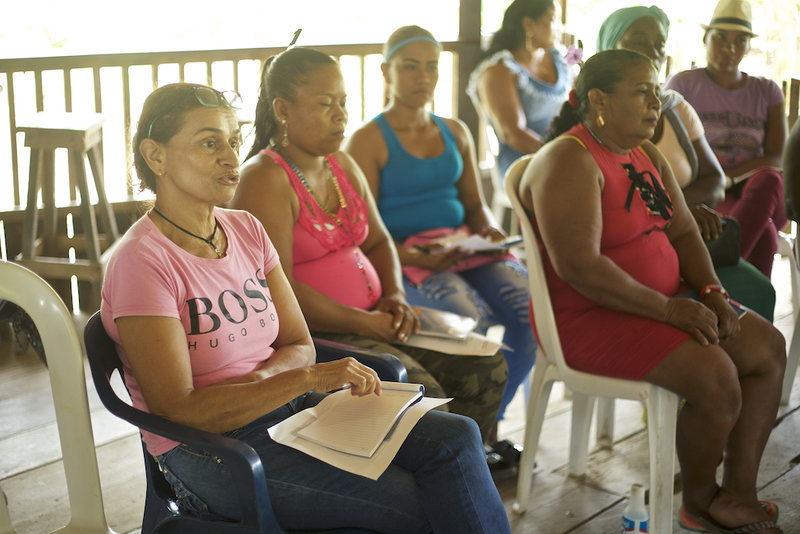 The representative of the Commission on Truth, Coexistence, and Non-Repetition, Angela Salazar, led the first session in which the participating women: victims, former EPL and FARC-EP combatants, and social leaders, told stories about how they are living the post-conflict and how they deal with stigmatization. Also, about their community life and social participation in their territories. How they have been trained on gender equality, and about their economic projects. In a ritual that invited reflection, each woman shared personal information about their lives. 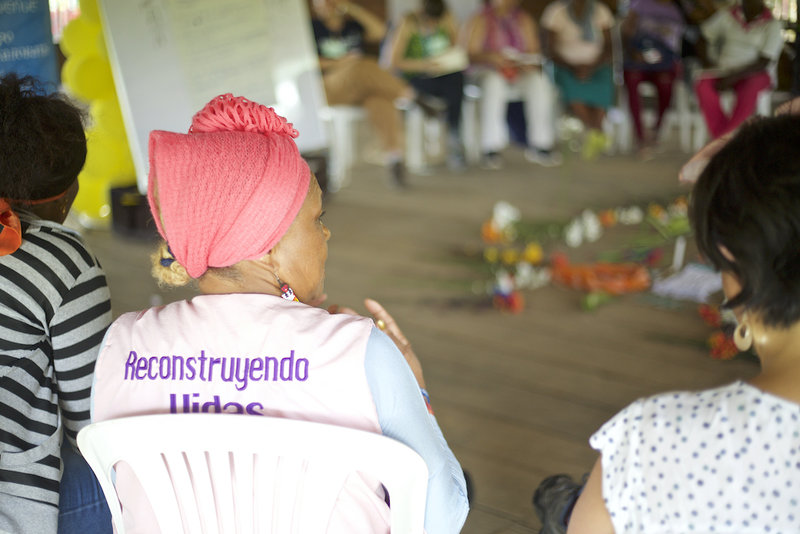 Noemi Durango, leader of Dabeiba, could not contain her sadness as she put down a "poncho" with which she wiped away the tears shed by her relatives who disappeared 23 years ago. Yancy Suarez, who is in the reintegration process, also cried as she delivered flowers for her sister, who died in a bombing in the Bajo Atrato region.

Claudia brought the photo of her grandson and put it on the ground next to the flowers. When she wanted to speak, a feeling of deep sadness closed her throat. Her grandson is her motivation to continue living. She also does it for her daughters and her mother. From her role as a mother and a government employee, Claudia is committed to peace, "There are people who do not know the truth, they judge us by the spread of disinformation, but it is up to us to demonstrate to society that we are human beings and that our past does not define our present or our future," she said.

The ARN psychologist for Urabá and Darién, William de Alba, considers these spaces as an opportunity for women to listen and comfort each other. "Women support each other, especially in moments when emotion overflows at high levels, and this is where containment or care in crisis must be done, that is why we are here, to serve women who need it." Like the ARN, the Commission on Truth, Coexistence, and Non-Repetition was prepared to deal with any emergency that arose. 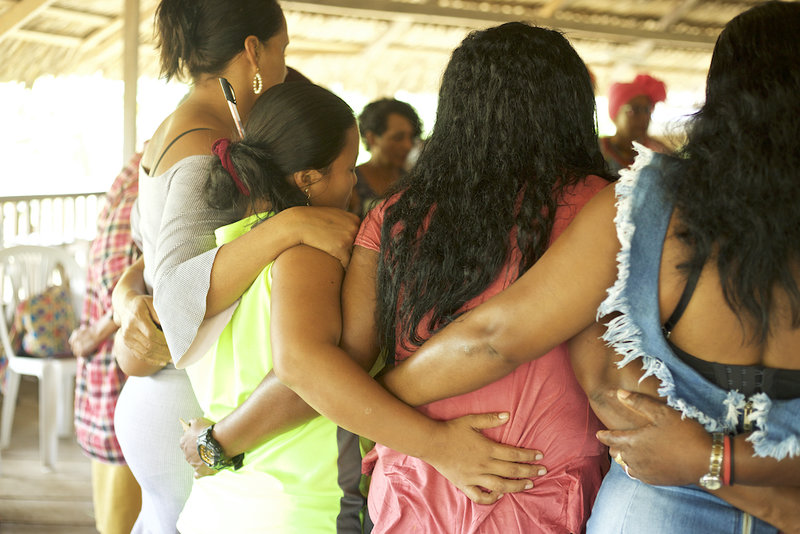 In the next session of the meeting, Camilo Lara from the ARN provided a space for dialogue and learning about self-protection and self-care mechanisms for women. “These kinds of training are very important for women to have sufficient tools to identify actions that alert them about the types of physical, psychological, economic and political violence, preventive actions, and routes of attention. Above all, for women who exercise leadership or spokesperson in their communities.”

One of the participants is Maria Alicia Murillo. Years ago, she had to leave the country because of threats from armed groups in Urabá. They saw in her an obstacle due to the strength of the women's organization movement she led.  When she returned to the country in 2014, she resumed her university studies and is currently working with groups of women who, like her, have been displaced from their territory and culture. María Alicia took advantage of the meeting to advise the participants.

"Study, my friends, because to participate, especially in politics, we need to know about politics and social development. Without education, it is very difficult for us to demand the guarantee of our rights". 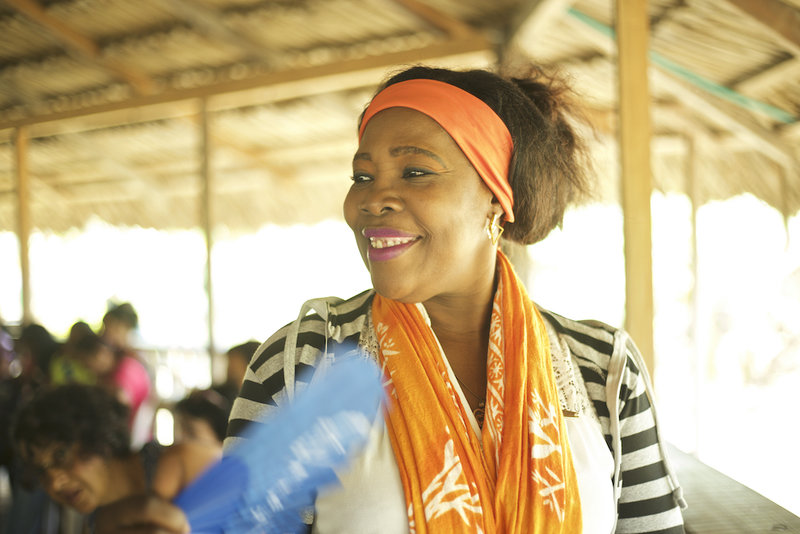 In another session, the women talked about their successes, the projects they are involved in, and the work they do from their communities to build peace and reconciliation. 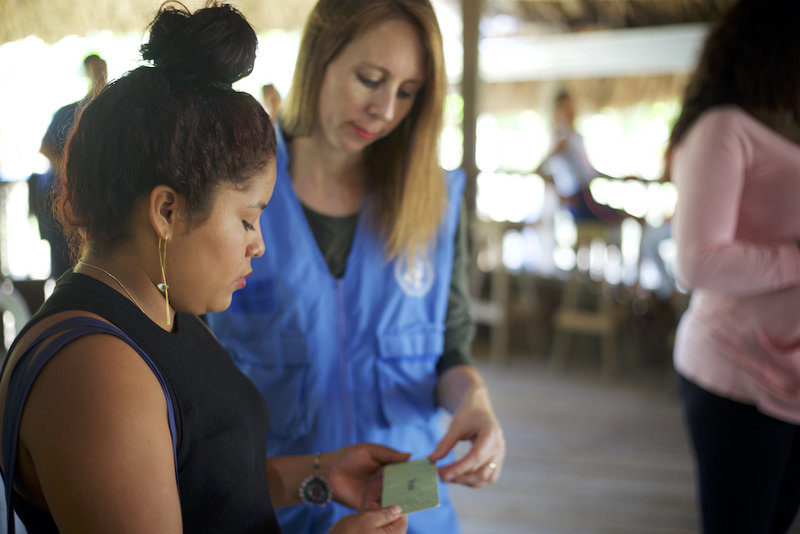 Aurora Pulgarín from Apartadó thinks that the meeting was very enriching, "meeting other demobilized women, sharing the experiences of the transition process to civilian life at different times of the conflict. We all share the same important moments, as seeing the family again and being part of a community; are different processes in each of the women, but with similar aspects. We are all still working to defend our rights and ideals."

Ángela Salazar thanked that space served to speak the truth of truth, through clarification, recognition, coexistence, and non-repetition, which are the Commission's approaches to transform the country, from a history of conflict to one forgiveness story. 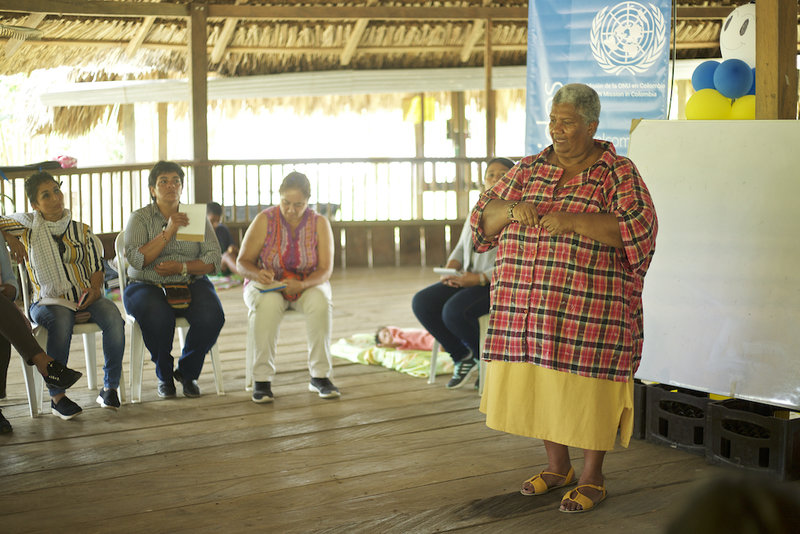 To close the event, a "plantation" of numerous plants and shrubs was held at the Selvita greenhouse.  The greenhouse is an initiative from the Gender Committee of the former TATR to promote education and love for nature. These plants and shrubs represent the seed of a relationship between women, which was born thanks to this meeting and who, without knowing each other previously, shared their stories from the perspective of gender solidarity. 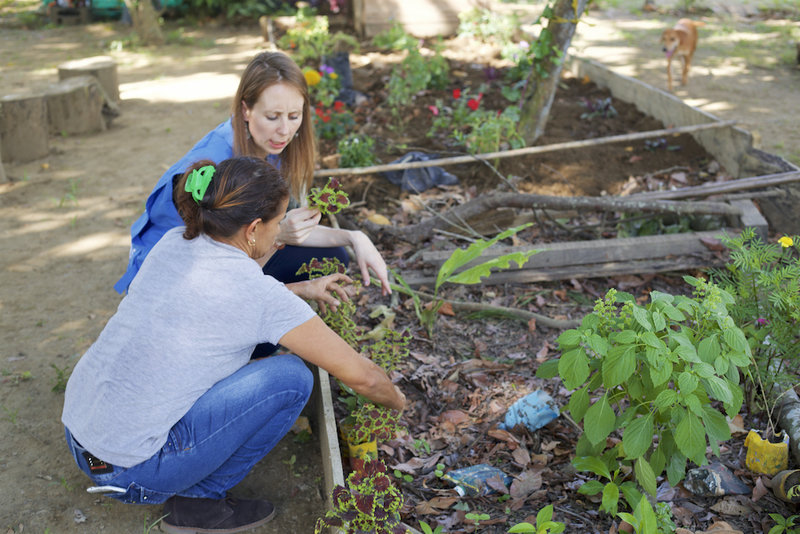 At nightfall, the participants and community of the TATR gathered in the theatre, on the banks of the Curvaradó River, in a last emotionally charged ritual where they lit candles for the women, for the people who are no longer there, for those who have no voice to defend themselves, for those who live, for their families, for forgiveness, for love, and, above all, for peace in Colombia. 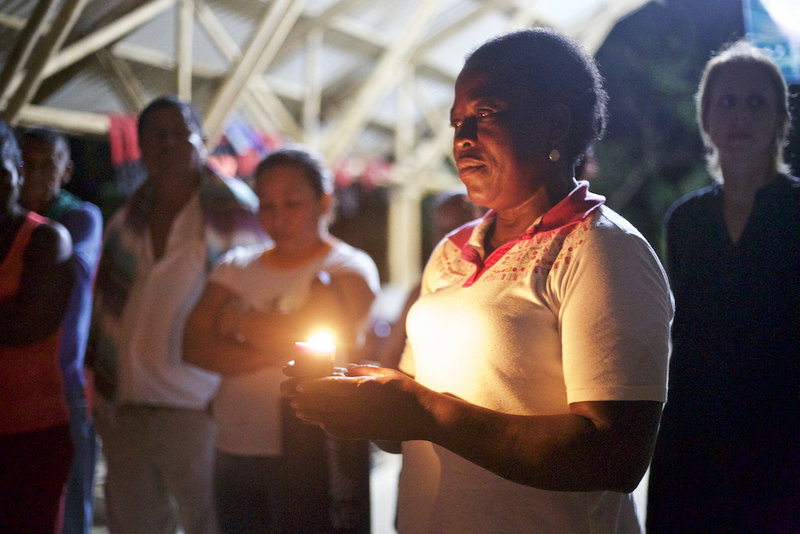