Access to water: the project that unites people in the process of reintegration and a local community in the Cesar department

Access to water: the project that unites people in the process of reintegration and a local community in the Cesar department

Both parties joined together to make undrinkable water accessible to their communities. This initiative is their only hope since they do not have access to this vital liquid. The work is carried out within the framework of an FAO project, funded by the European Peace Fund and accompanied by the UN Mission.

"You can have a beautiful house with a large garden and leafy trees; a house made of gold if you want to, but if it does not have access to water, you have nothing. For us, that we have no house, having water is the most important thing", says Maritza Franca while she throws some small noodles to the pot in which she is preparing rice. This, along with a stew, will be the community lunch that will close the day.

The pot is in a wood-burning stove, somewhere at Serrania del Perija, between the municipalities of La Paz and Manaure in Cesar department, where men and women work hand in hand on a project that promises to take water to their communities. 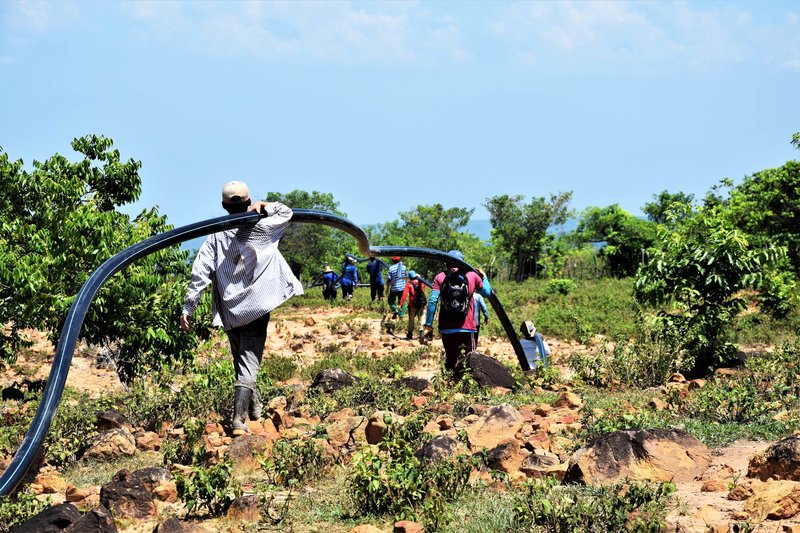 This community-based project will benefit nearly one thousand people: some 300 between people in the reintegration process and their families who live in the village of Tierra Grata, Manaure, and about 700 from a community near to San José de Oriente, La Paz, which is the closest populated center to Tierra Grata. Nobody receives a penny for their wages because it is a vital project for these communities that lack the precious liquid.

The day has brought together more than fifty people, but there are days that have involved up to 115 volunteers dedicated to installing long and heavy three-inch hoses for about nine kilometers of mountainous land, from the water source that is near the Chiriáimo River, in the Alto de la Virgen, to two points: one on the Tierra Grata sidewalk and the other in San José de Oriente. There have been long days of work to raise the hose, glue it, bury it and connect it to the water source. 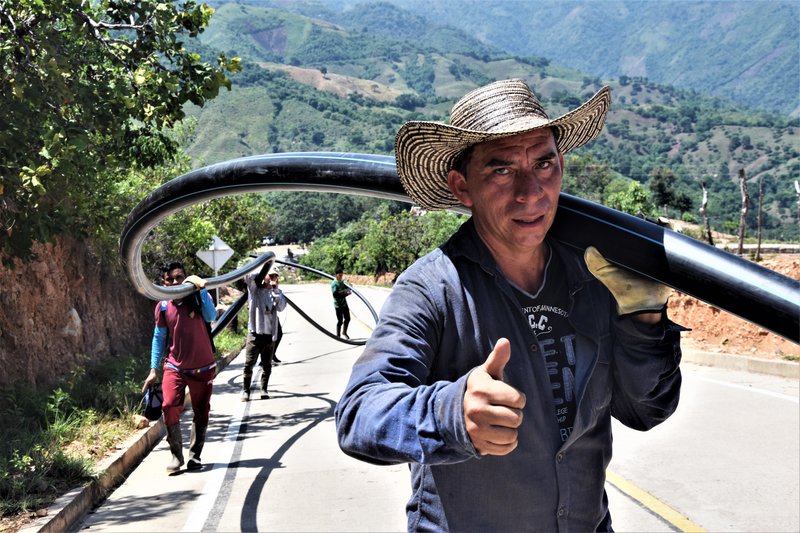 At the end of the day, as most of the time, lunch is prepared by the community and former combatants, like Maritza. They have transformed their need for water into hope, into joint work, as a reason for meeting, organization, and joy.

Maritza carries out her reintegration process in Tierra Grata, where she lives with her partner and her two children, Juan Esteban, 13 years old, whom she had during the war; and Brenda, a one-year-old baby who was born after the signing of the Peace Agreement. Maritza says that in Tierra Grata there is no aqueduct and that the water that arrives is brought in tank trucks that the Agency for Reintegration and Normalization (ARN), buys from firefighters. "If it weren't for that, we wouldn't even have water there for a broth," she says while stirring the pot. 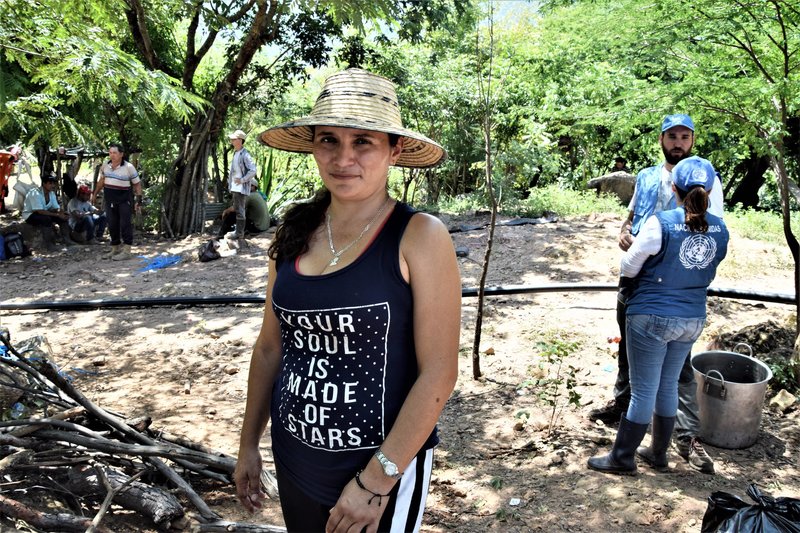 In the upper area of San José de Oriente, there is no permanent water. "I don't know how to explain it, but for you to get an idea: we have days in which the water only comes for an hour," says Flor Liz Quintero, a resident of San José de Oriente. For her, this project is also a priority:

"if we get access to water every day, this will be something very big for us, will be a miracle, a miracle that maybe other people do not value, because they are used to open their tap and water is there, but here for us is very different". 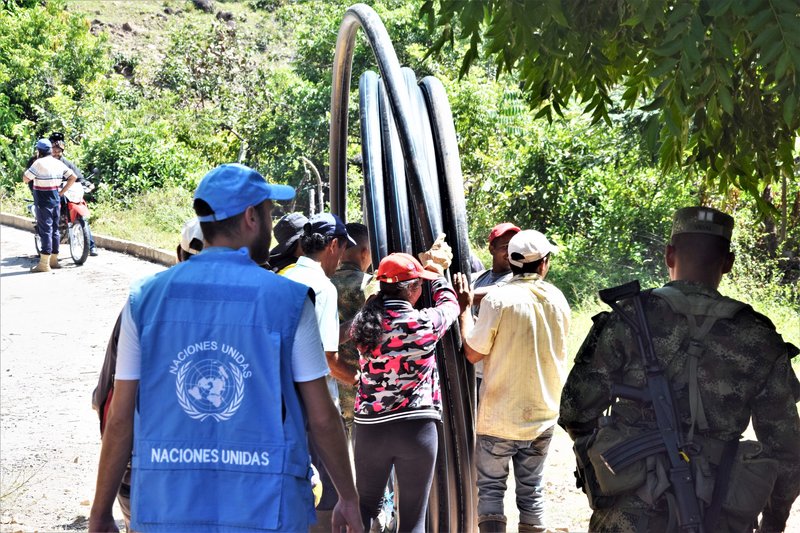 A community project for reconciliation

This project began on May 2018, when the Food and Agriculture Organization of the United Nations (FAO), with resources from the European Fund for Peace, began a prioritization process with the communities to support a project that would generate community integration, have technical viability and, above all, contribute to the productive projects that are the basis of their future food security. The idea was to build a school, a football pitch, and a water project. Finally, work began last August.

"For us, the priority has always been water," recalls Carolina Vargas, a former FARC guerrilla. "Water is not only life, but many of our other projects depend on it, such as the productive ones, our food, and the housing project. People from the community thought the same and did not hesitate for a second to choose the water project. "We support this project in which we work with the ex-combatants," says Héctor Palacio, a member of the community.

The work, which is expected to be ready in September, is carried out within the framework of the Integration for Reconciliation project of FAO, funded by the European Fund for Peace and supported by the Army, ARN and SENA. The UN Verification Mission in Colombia accompanies the work in the field. 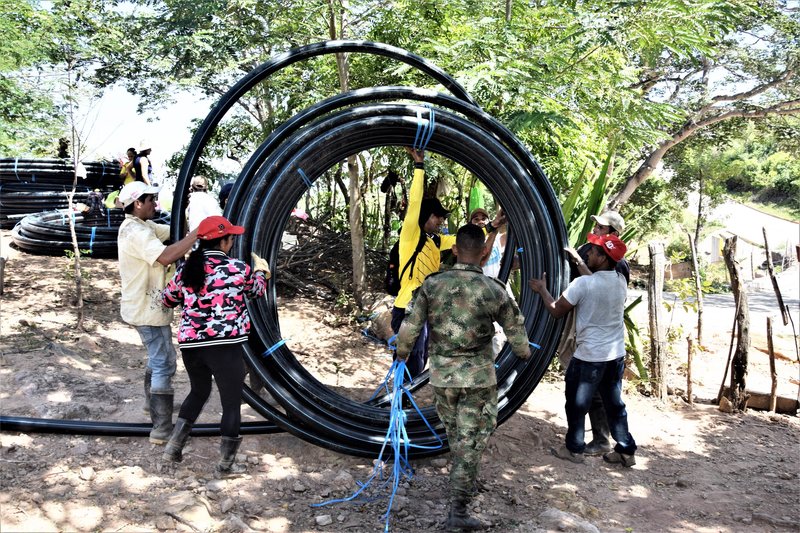 The community and inhabitants of Tierra Grata hope that this work would be the genesis of their future projects: an aqueduct and a sewer system, to enjoy drinking water, not only for their productive initiatives but also for their daily lives.

For now, the water project that seeks to contribute to the reintegration process has managed to forge links between vulnerable communities and has created spaces for dialogue and reconciliation, such as the community stew that has allowed them to share and work for a common dream. 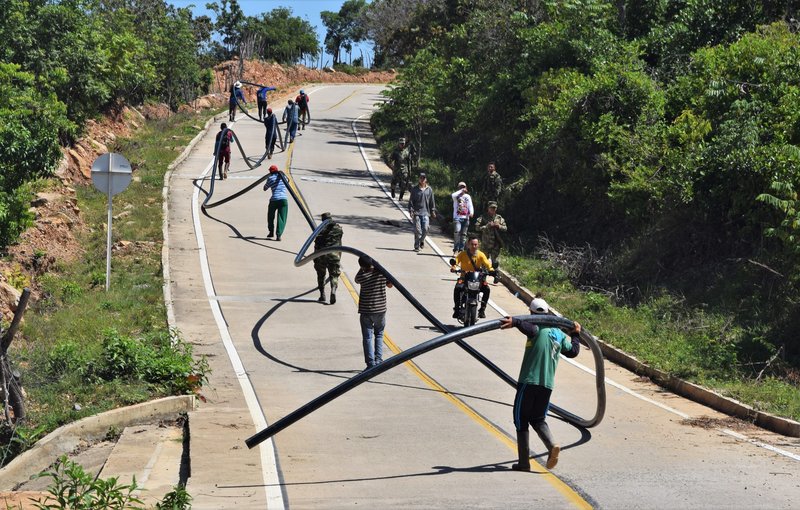 "Sharing with everyone is something very nice because there we find ourselves as one big family. So far, we have built something very good, which is trust, something that before we didn't have with them, but now we build trust every day," says Zulle Mesa, a community leader in San José de Oriente.

The food is ready, it's two o'clock in the afternoon, and it's the end of the working day. Tomorrow, very early, they will start again until finally, the water sprouts in San José and in Tierra Grata.