Young people living in the former Territorial Area for Training and Reintegration (TATR), from Tierra Grata, in Cesar department in northern Colombia, shared their stories with young people from the neighbouring municipality, interviewed each other, and then encouraged each other to write their stories.

Telling one’s life story to someone else, telling them the truth, opening up one’s heart, is difficult. And telling one’s life to a stranger, who also lives in an area of which we have preconceptions, either due to lack of knowledge or due to an excess of it, is even more complicated.

That was the exercise carried out by 14 young people, five from the former Territorial Area for Training and Reintegration (TATR), from Tierra Grata, in Manaure Balcón del Cesar, and nine from the neighbouring community of San José de Oriente district, in the municipality of La Paz, Cesar, on the northern coast of Colombia, near the border with Venezuela. 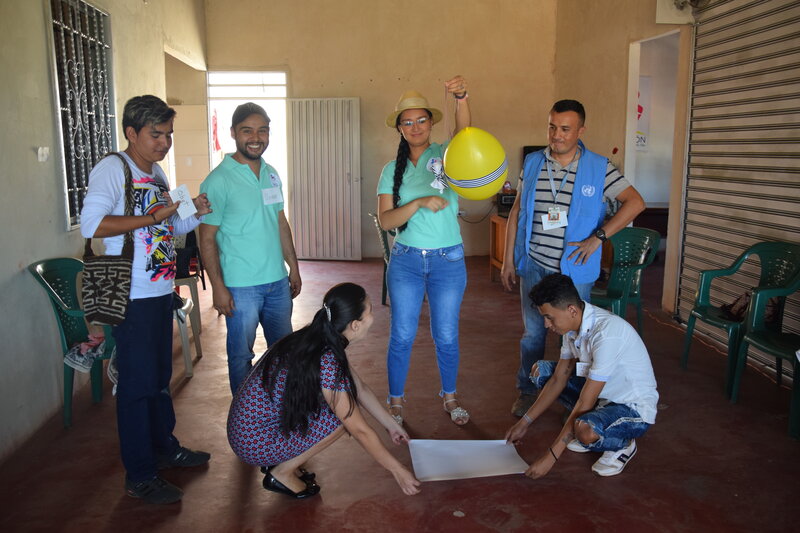 They did so within the framework of the project called "Young Leaders for Peace and Reconciliation in Colombia", which consisted of four workshops, one day each, in which young people, between 17 and 30 years old, learned about themselves and about each other, thanks to a methodology that combines elements of peacebuilding, resilience, memory, and reconciliation, with different activities that allowed them to interact and get to know each other. These workshops were held in the department of Cesar and Guaviare, by the United Nations Verification Mission, within the framework of its youth strategy, along with Ciudad Don Bosco and the United Nations Institute for Training and Research (UNITAR), which leads the "Young Leaders of Peace and Reconciliation in Colombia" project throughout the country. 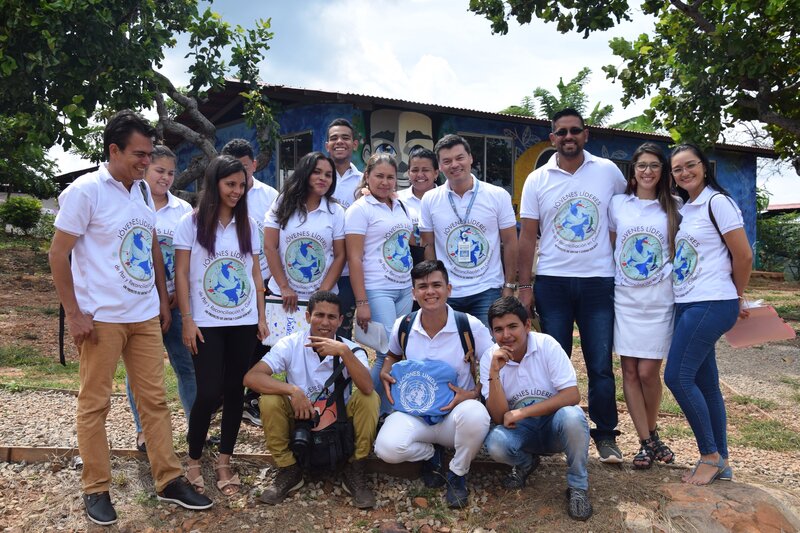 For the final exercise of the workshops in Cesar, each of the participants from the former TATR of Tierra Grata interviewed a youngster from the community, and each of the young people from the community did the same with an inhabitant of Tierra Grata. This exchange of stories also meant finding common ground between two apparently opposite worlds: first, that of a town that did not exist until a couple of years ago (Tierra Grata) and in which more than 150 former members of the FARC live with their families; and, second, the town closest to Tierra Grata, a township in the municipality of La Paz hit by decades of violence and where 77 per cent of its inhabitants are registered as victims of the armed conflict. 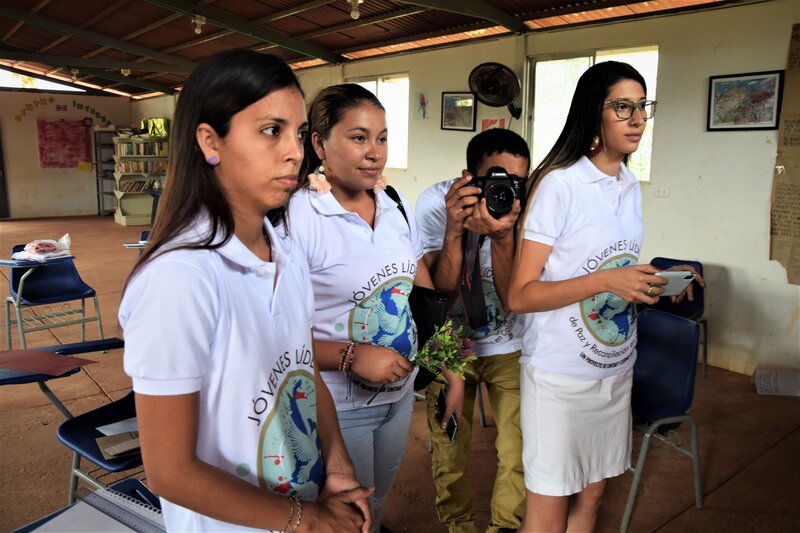 One of the objectives of the project was to promote non-stigmatization and respect for the rights of all people. In this context, it also focused on preventing the stigmatization of those who laid down their arms and are carrying out their reintegration process.

Carlos Andrés Barbosa was one of those 14 young people who participated in this project. He is 18 years old and part of the “Building Dreams Towards Peace” Foundation. He is a recent high school graduate and also a victim of violence. The murder of his uncle Eliecer marked him, to the point that he encouraged the vote for the No in the 2016 national plebiscite on the Peace Agreement with the former FARC-EP guerrilla. Now he has changed his stance thanks to a simple scene:

"I saw a policeman and a former combatant having coffee, like two friends, and I thought: if they can, I can as well." 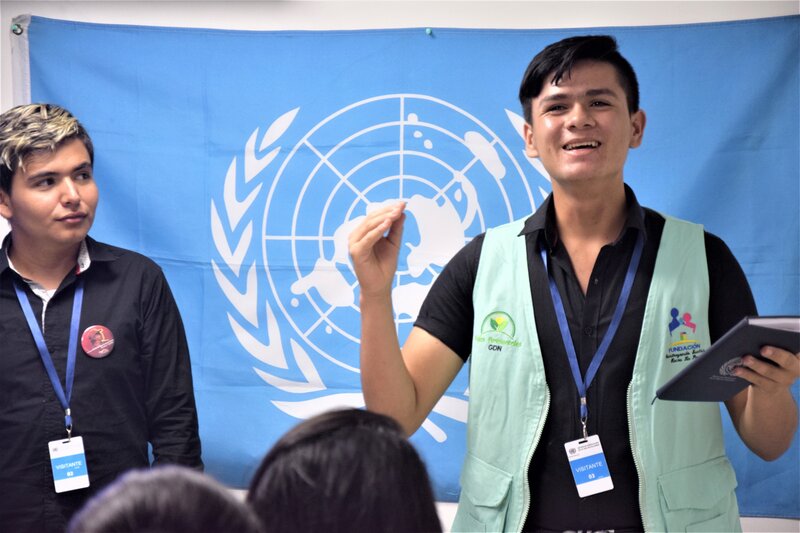 Their relationship with the young people of Tierra Grata is so fruitful that they now have a project together: Son de Paz, (To the Tune of Peace), a cultural collective in which they try, through music, art and culture, to promote reconciliation and rebuild the memory of their people. This project is accompanied by the UN Verification Mission, the Peace and Development Program of Cesar department, and the Agency for Reintegration and Normalization (ARN). 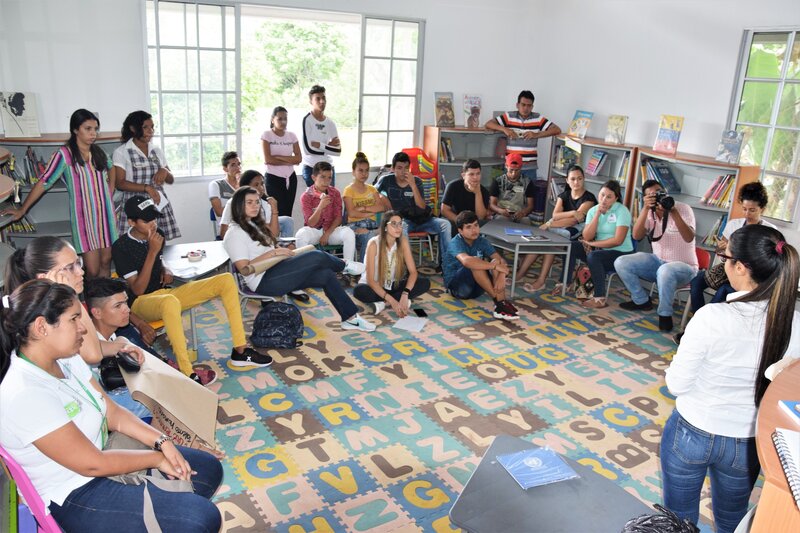 Carlos Andrés interviewed Obet David Aguirre, another young man who, although he is not a former combatant, ended up deciding to live in the TATR, next to the former members of the FARC who are carrying out their reintegration process in Tierra Grata. This is the story Carlos Andrés wrote:

"The day I decided to be free": Obet David Aguirre Ríos

“Because I was part of the LGTBI community, I had to get away from my family, because my mother found out about my sexual orientation and did not accept it. She kicked me out, and partly because of that I ended up living here, in Manaure, Cesar, in a Territorial Area for Training and Reintegration called Tierra Grata. 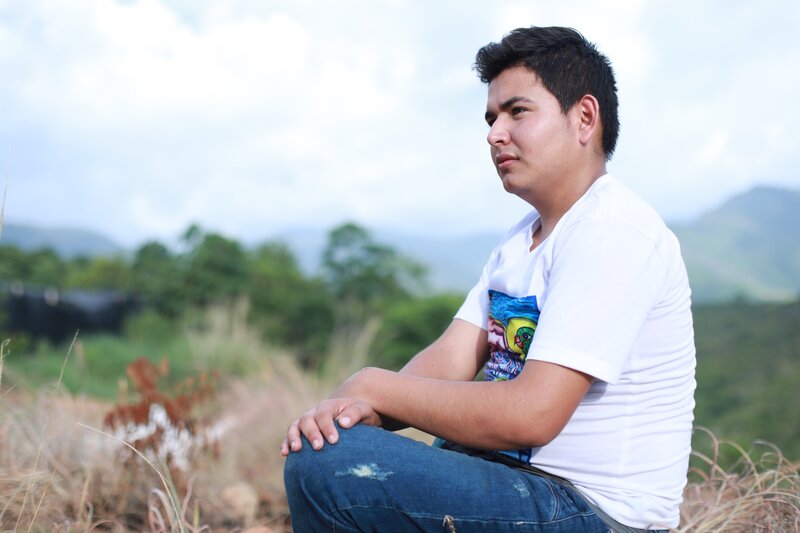 I am 22 years old, I am from Palmor, a district in Ciénaga, Magdalena department, located in the Sierra Nevada de Santa Marta mountain range. I was displaced by the violence, like many more people from my town. When I left Palmor I went to live in Barranquilla, in a small apartment that the Government gave my mother for being a victim of the war. She could not live there because of her job, but she left me living alone in the apartment because if no one lived there, the Government would take it away from her. At that time I met Adriana, a lady who had a corner store near my house. I went every day to the corner store to call my mother, to tell her that I was alone and bored. I must have been fourteen years old, and Adriana listened to me; I think she felt sorry for me. One day she told me that she also lived alone because her husband, Jeison, was in prison for a crime that he did not commit. We became friends, then she offered me a job and soon I went to live with her. I consider her as my mother because she was there for me during a very difficult time.

This is the reason why, when my real mother kicked me out of the house, for being gay, I did not hesitate to go look for Adriana. I saw her again on June 6, 2018, when I first set foot inn the TATR of Tierra Grata. The first thing that surprised me about the place is that there was a military checkpoint at the entrance (it is still there). They made me get off the bike and they frisked me. I asked what it was for and the answer I got was that I was in a reintegration area. “A what?!” I thought out loud, and a soldier replied: “This is where those who used to be members of the FARC guerrilla live”. I was shocked and I had no idea what was going on.

When I managed to enter, Adriana hugged me and said: “I'm glad you're here. We need to talk". And she confessed to me that she belonged to the FARC and her husband as well. She told me that he had been in prison for rebellion, and that thanks to the peace process he had been released. I was very confused. I will not deny that I had a lot of stigma against them, all of them, in my ignorance. I had a very different idea of the guerrillas, and I felt betrayed. It seems that I was not the only one who had secrets.

When I got to know the place, I was amazed and began to change the way of I saw them. Where I come from, the most important thing is individualism, and here what matters is the collective. They are like a single family, a family for whom my sexual orientation is not a problem. Here I could be free, I could be myself, among other things, because Adriana always knew that I was gay. At first, I did not say anything about the issue, but a year ago I was invited to a FARC National Meeting on Gender, and I began to hear stories from former combatants who, after the signing of the Peace Agreement, were able to come out of the closet, and I made up my mind: when I arrived back at Tierra Grata I would tell everyone.

Now I am living here my new life, my true life. I am one of the managers of the store in the TATR, and I am part of a poultry project (Pon Paz) with a gender focus, in which 11 women and I work, with the support of the British Council and the Agency for Reintegration and Normalization, ARN. Adriana and her husband went to live in Tolima, but I wanted to stay because here I can be free and because I feel grateful. 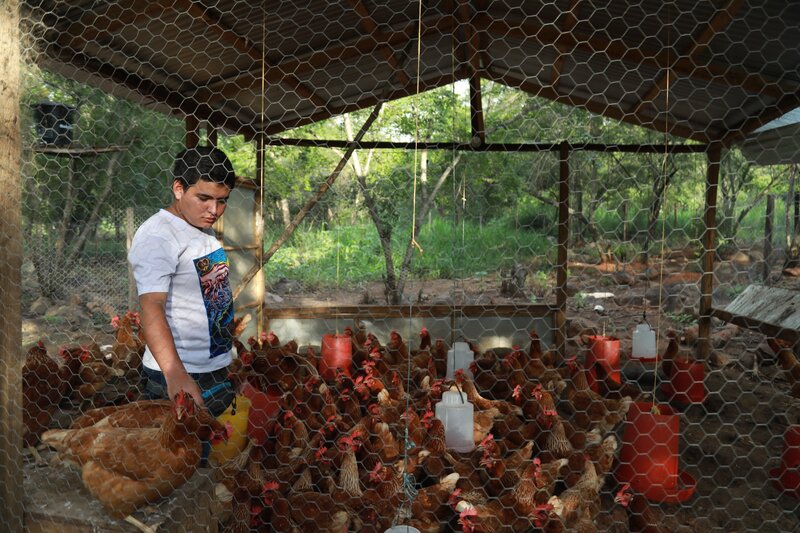 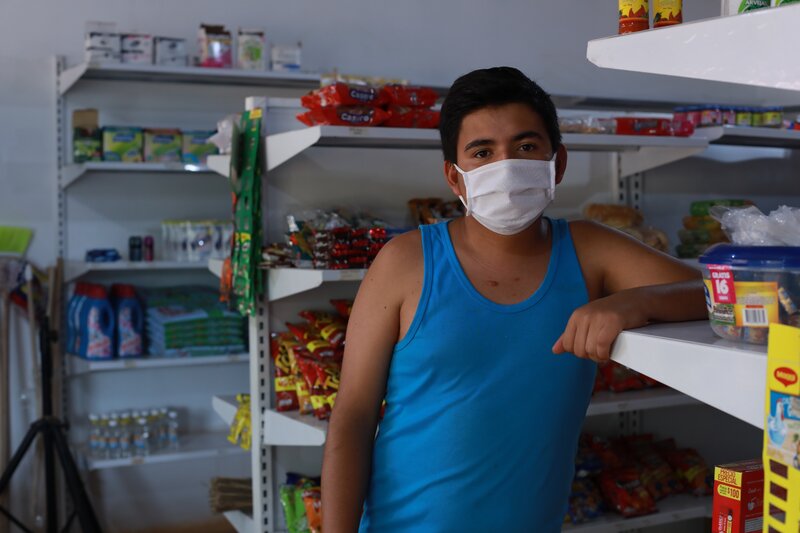 In Tierra Grata I have prepared myself professionally: I became a food promotion technician through the Colombian National Institute for Vocational Training (SENA); I completed a diploma in capacity-building for territorial development with the Cesar department Development and Peace Program; I studied photography and have participated in several youth projects with the UN Mission and UNITAR. I am also going to study, I am already enrolled in the Fundación Universitaria del Área Andina, a university nearby. I want to be a psychologist and contribute my own grain of sand to the building of peace in my country”. 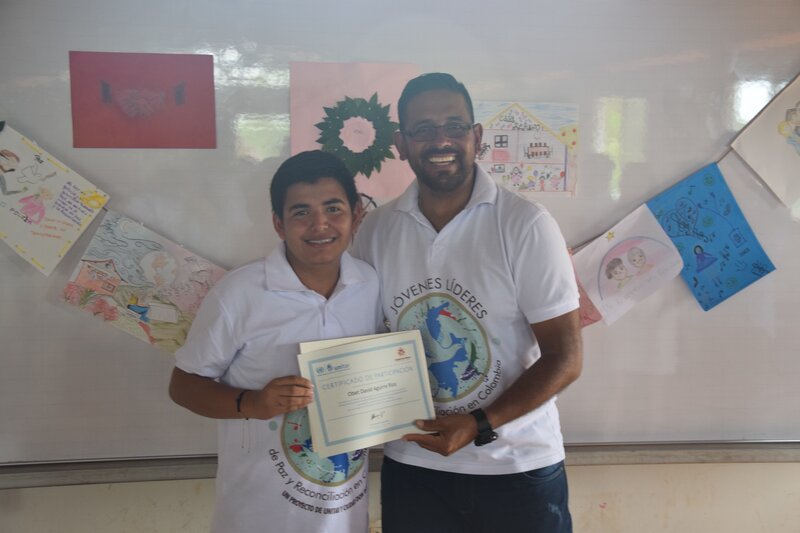