Remedios goes all in for reconciliation

Remedios goes all in for reconciliation

Early in the morning, Remedios was painted in white balloons and the houses, buildings and police station facades were adorned for the occasion. Inside the coliseum, victims and victimisers lit candles to symbolize “the light of hope”. 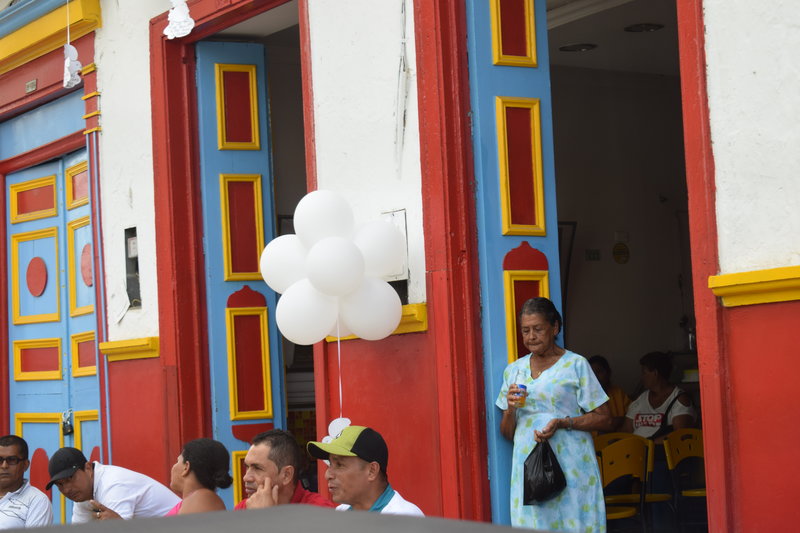 Little by little, the venue filled and after a private ceremony that had started early in the morning, a public ceremony followed where the whole community participated, as it was meant to be reconciliation event for everyone.

The event started at 2:00 p.m. when the Major of Remedios, Lucia del Socorro Carvajal, thanked everyone for their bravery of looking into each other’s eyes and take the first step towards reconciliation. “One of the things we need to achieve is this so-much-longed peace by raising awareness that there is enough space for everyone, that there is a willingness from former combatants to change the way they relate with society”, she said.

“All of us, who have the privilege to be here, will remember this day forever. Today, the Colombians who gathered at this coliseum are setting an example for the whole country by showing them the path that leads us to a better future, a future that has made amends with a painful past. United Nations highly values this reconciliation exercise among victims, former FARC and AUC combatants. Therefore, the international community has decided to provide its support to initiatives like this, along with the national government, and the departmental and local authorities,” added Richard Clarke, Deputy Chief of the Regional Office in Medellin of the United Nations Verification Mission in Colombia. 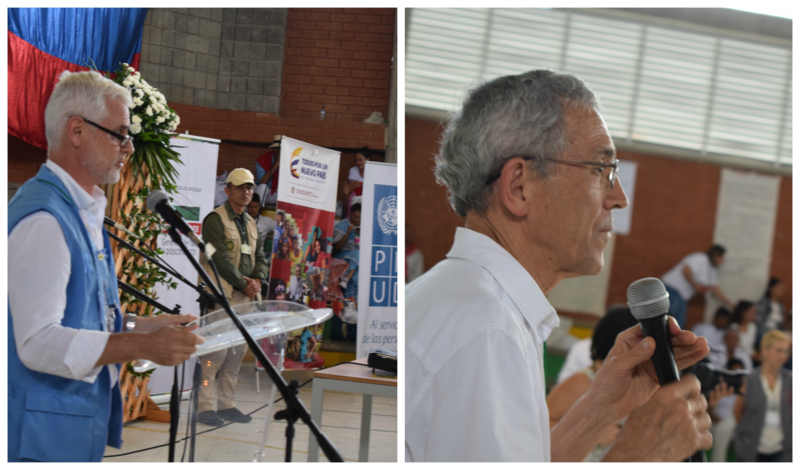 He highlighted the challenges currently faced by the victims, which require presence of the government, the civil society, and the international community. “In this light, all the United Nations system in Colombia is committed to accompanying the victims of the armed conflict in their journey to regain their rights. We also have a high commitment towards the reintegration of FARC ex combatants, as well as the communities most affected by the conflict,” remarked Clarke.

Afterwards, the voice of the Jesuit Priest Francisco De Roux, president of the Truth, Coexistence and Non-repetition Commission in Colombia, filled the place where the audience stood up and offered a minute of silence. He said that events like this have to multiply in Colombia and all over the territory “in the sincerity of the heart”. To this effect, the commission will work tirelessly to uphold the victims’ rights.

He insisted, “forgiving is not affording impunity. It is affording truth, reparation for victims. Heal hatred. Find justice” and he highlighted the fact that reconciliation efforts come from the territories where war started.

Both victims and former combatants first met on a private event, which focused on grief and bereavement. Afterwards, there was a public event for the local community, which included a symbolic ceremony, where they exchanged throughts on the importance of reconciliation in the process of building territorial peace and tolerance. 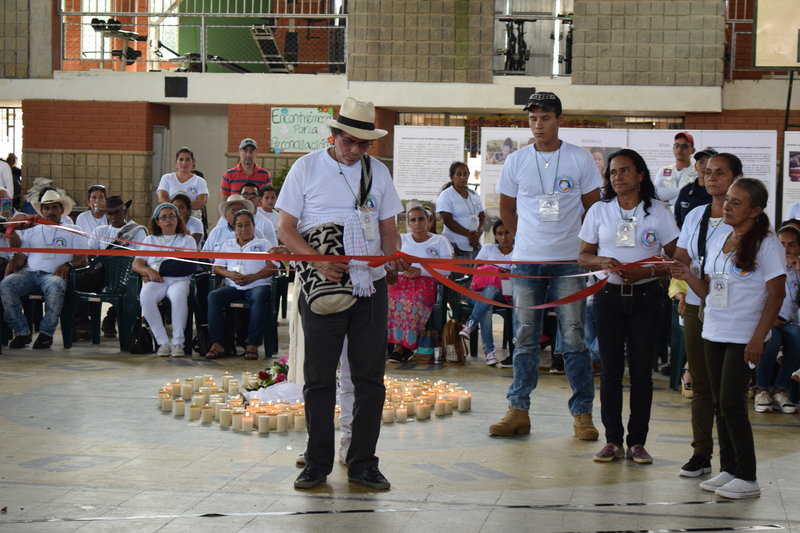 The representatives for the victims and former FARC and AUC combatants were in the centre of the coliseum and began to cut several ribbons, which had a symbolic meaning. To symbolize the end of bloodshed they cut red ribbons. Black symbolized grief and mourning and by cutting this ribbon off, they hoped violence would never come back to their region. Green symbolized hope and white commitment to peace. These last ribbons were not cut off to symbolize a strong message of reconciliation.

From the point of view of the victims, “Let’s meet for reconciliation” gave participants satisfaction as part of the emotional recovery process that makes part of the reparation component for the victims, which encourages non-repetition.

During the previous weeks to this event, both victims and former FARC and AUC combatants prepared for it by engaging in a series of psychosocial workshops, offered by the UARIV (Victim Assistance and Comprehensive Reparation Unit), and focused on grief  and bereavement, and the role of these two components in the farmework of reconciliation and coexistence in the area.

At the end of the event, which included cultural and music displays, as well as historical storytelling, participants signed the Book for the territorial reconciliation and an accord containing all the commitments made by the victims’ delegates, former combatants and institutions.

“One of the messages included in the accord was read at the end of the event by the United Nations Development Regional Officer in Antioquia, Carlos Iván Lopera: “There are deep wounds in our zone longing for the healing hands of the victims, and the healing presence of those who caused such wounds (people and armed groups) but today want to defend life”. Mr. Lopera closely supported the articulation of all conflict actors, who hold their hands for reconciliation in Remedios. 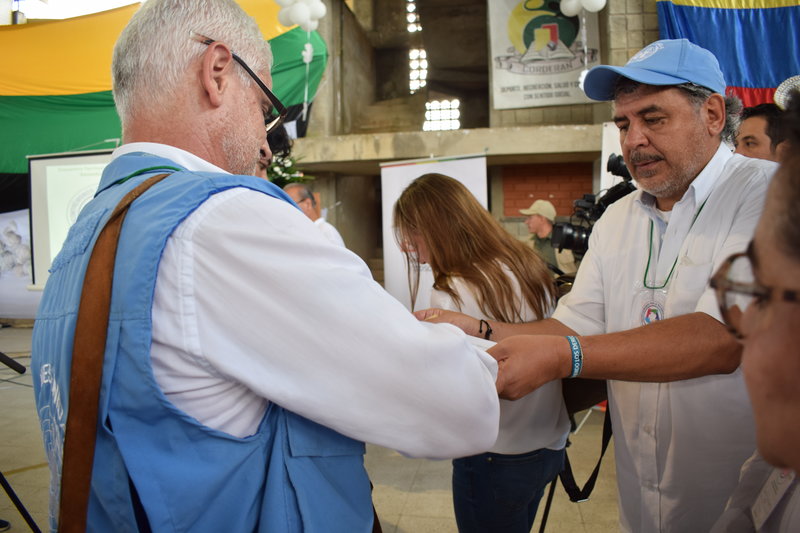 “Reconciliation is an act of love and generosity for our region. What happened in Remedios, where various actors of the conflict took part in a ceremony of reconciliation with the region and committed to non-repetition of acts of war, is a powerful fact that fills us with hope and faith. A country free of hatred is possible! I quote a former combatant: “it is the first time that I meet an ex-combatant from another armed group who does not show hatred. Hope makes coexistence easier and takes us back into the path of goodwill. The victims of religion deserve a special mention and profound respect. Their participation in this process, their openness and respect, their empathy towards our pain took us to a scenario of shared suffering, but also towards shared hope. They, sometimes sharing their words, or their silence, make a path to reconciliation" : Carlos Iván Lopera, UNDP Regional Officer in Antioquia.

Where did it all start?

It is an initiative started by the Regional Peace Committee in Antioquia, through the Subcommitte of Reconciliation, which encompasses the efforts made by the Government of Antioquia, the National Government, local authorities, academy, FARC and the United Nations regarding this crucial aspect for the delivery of the Peace Agreement. Gerencia de Paz on behalf of the Government of Antioquia, ARN, OACP and UARIV on behalf of the Government of Colombia, the ONGs Fucepaz, Arte de Vivir, Confraternidad Carcelaria Colombiana, FARC, semillas de Paz, Cahucopana – ACVC – UNDP, and the United Nations Verification Mission in Colombia, were among the participants in this even. 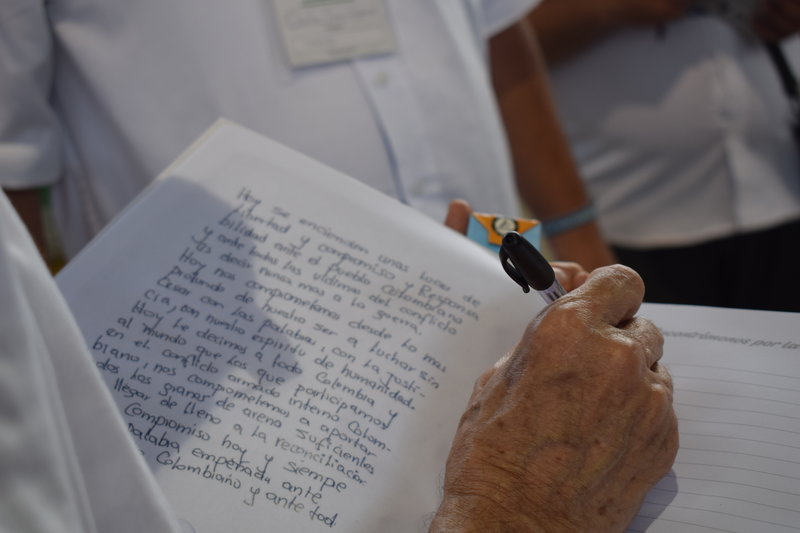