A commission composed of the governor's office, the Pablo Tobón Uribe Hospital, the CNR-FARC and the Agency for Reintegration and Normalization (ARN) visited the former TATR of Llano Grande, Dabeiba, at the invitation of the United Nations Verification Mission in Colombia.

The Llano Grande family, in Dabeiba-Antioquia, is growing thanks to the Peace Agreement. Ninety boys, girls, and teenagers are now studying in elementary and junior high school. “Numbers have increased in the last three years. It started with 18, then 70 children, and now there are 90 kids,” said sister Mary Blanca Franco from the Mother Laura congregation.

The hopeful news was welcomed by the commission composed of the Governor’s Office of Antioquia, the Agency for the Reintegration and Normalization (ARN), the Pablo Tobon Uribe Hospital and the UN Verification Mission in Colombia during a visit to the former Territorial Area for Training and Reintegration in Llano Grande, Dabeiba, western Antioquia. The commission also learned about reconciliation and community building projects.

The delegation included the Secretary of the Governor’s Office of Antioquia, Luis Fernando Suarez; the Secretary for Women, Natalia Velasquez Osorio; the Secretary for Citizen Participation, Juan Correa Mejia; the Manager for Peace Affairs, Rafael Blanco; the director of the Hospital Pablo Tobon Uribe, Andres Aguirre; the Coordinator for Antioquia and Choco of the Agency for the Reintegration and Normalization (ARN), Paulo Serna; Farc party congressman, Omar Restrepo; CNR delegate, Sebastian Berrio and the Head of the Medellin Regional Office of the UN Verification Mission in Colombia, Francesc Claret.

The visit on 11 February, began with a meeting with the military and police forces in a space called the ‘Blue Tent’ that brings together community, people in the reintegration process, government and state security forces.

“We tell everyone that comes here that we are a family, the Llano Grande family. For example, at Blue Tent, safety was the first issue under discussion. Today it is a space to work together for the community. Everyone helps out, and we repaired a woman’s house in a nearby town,” said Sargent Jose Ovidio Lopez. 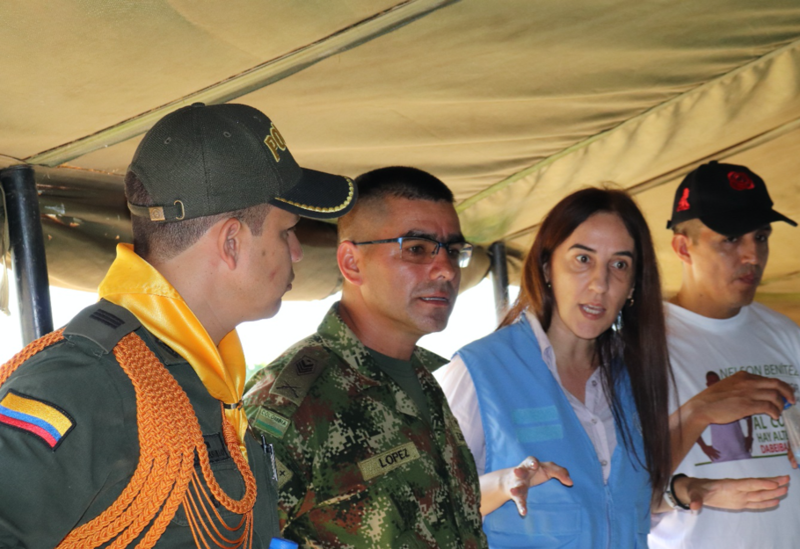 Government, police, army, UN, people in the reintegration process and community all participate in Blue Tent.

Later, the delegation visited the ''arepa'' factory, an enterprise developed by the women of Llano Grande with the support of FAO; they toured the Educational Institution, a tailor's shop, a community restaurant, a bakery and the model house of a tourism project.

A visit to the productive initiatives in Llano Grande. The “arepas” factory and model home for tourism. 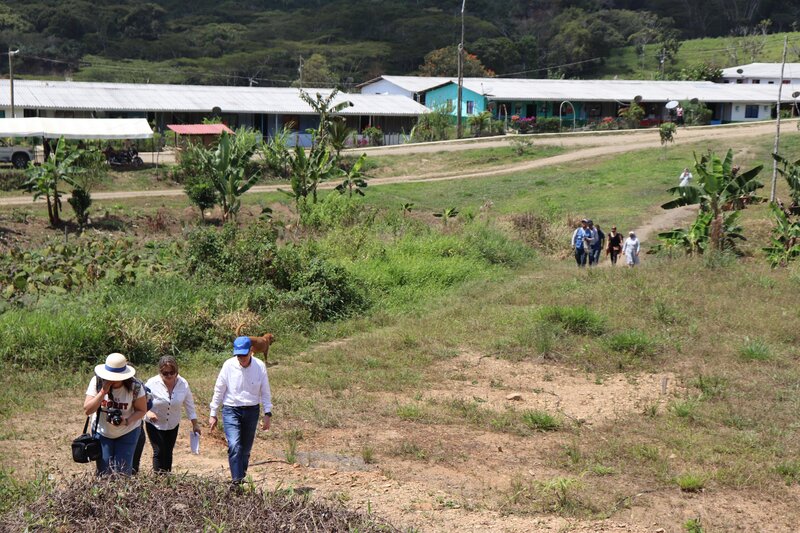 A visit to the productive projects in the former TATR in Llano Grande, Dabeiba.

One of the most emotional moments was the dialogue with more than 200 people who attended the meeting in the community room of the former TATR, where they talked about the achievements in terms of reintegration, but also discussed the challenges of institutional strengthening to ensure the development of the initiatives. This meeting was attended by representatives of the Dabeiba Mayor's Office, municipal councillors and representatives of some neighbouring local communities. 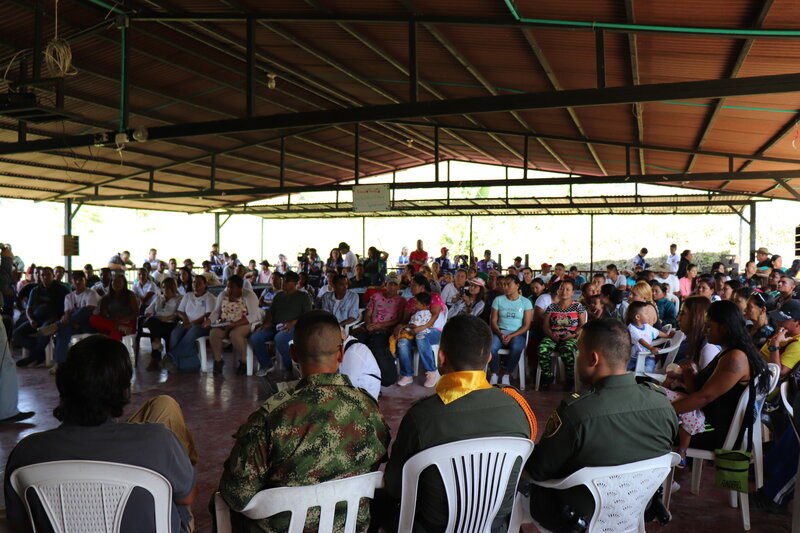 The meeting with the Government of Antioquia was well attended. 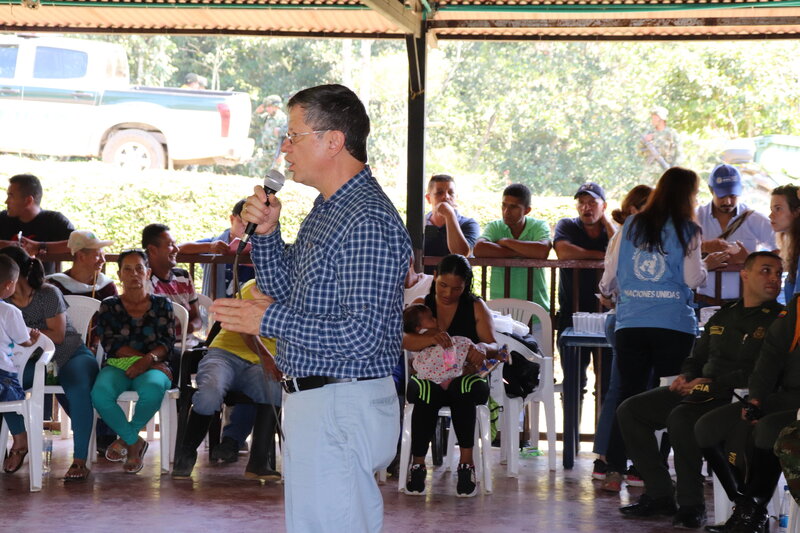 The secretary of the Governor’s Office in Antioquia, Luis Fernando Suarez speaking to the Llano Grande community.

"Today, we had a great opportunity to experience the implementation of the Peace Process at the TATR of Llano Grande in Dabeiba. We talked to the community, and their leaders presented the productive projects they are carrying out. In the Governor's Office of Antioquia, we will work with the Development Plan to support peace to advance sustainably and consolidate peace; because the route is through peace, non-violence and reconciliation," said Suarez.

He adds that Llano Grande is a successful model. "Although it is a complex project, they have shown us first hand their difficulties, but also their conviction to work for peace in Antioquia and Colombia. 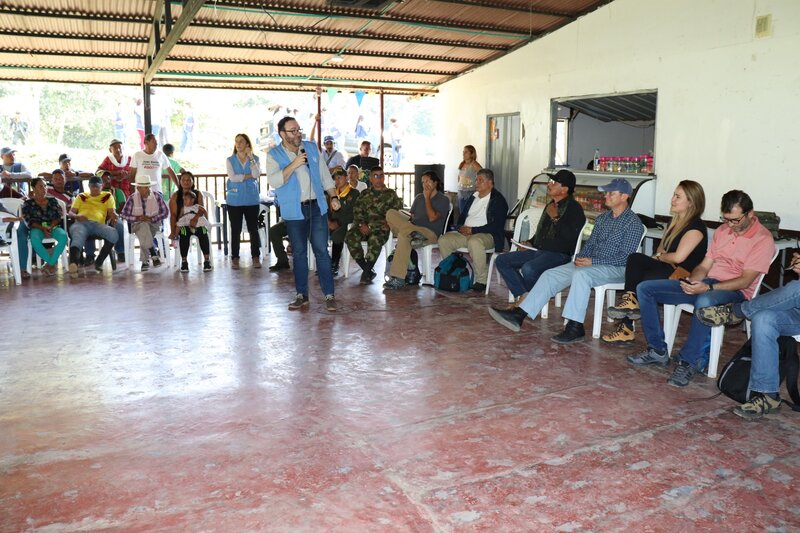 The Head of the Medellin Regional of the UN Verification Mission in Colombia, Francesc Claret.

In this regard, the head of the Regional Office in Medellin of the UN Verification Mission in Colombia, Francesc Claret, stressed that the reintegration process is advancing substantially in this region and highlighted the commitment and willingness with which Llano Grande has taken on the challenge of building peace.

“Today’s event is very important. It is a strong signal of institutional commitment for peace that this visit is being carried out with elected officials of the Governor’s Office of Antioquia a month before they take office,” concluded Claret.