Being a volunteer in the UN Verification Mission in Colombia, gave Ornella Uberti the confidence of doing what she has always been passionate about: being part of a social transformation that seeks to strengthen human sensitivity, to build peace.

Ornella Uberti was born 28 years ago in Rosario, Argentina. Twelve months ago, she registered in the United Nations Volunteers Global Talent Pool, and without expectations, she was called soon to be one of the hundred UNV that are part of the United Nations Verification Mission in Colombia. Her profile: Politologist, master's student in International Cooperation and Humanitarian Aid, fluent in English and Portuguese, with experience in the Colombian armed conflict context. 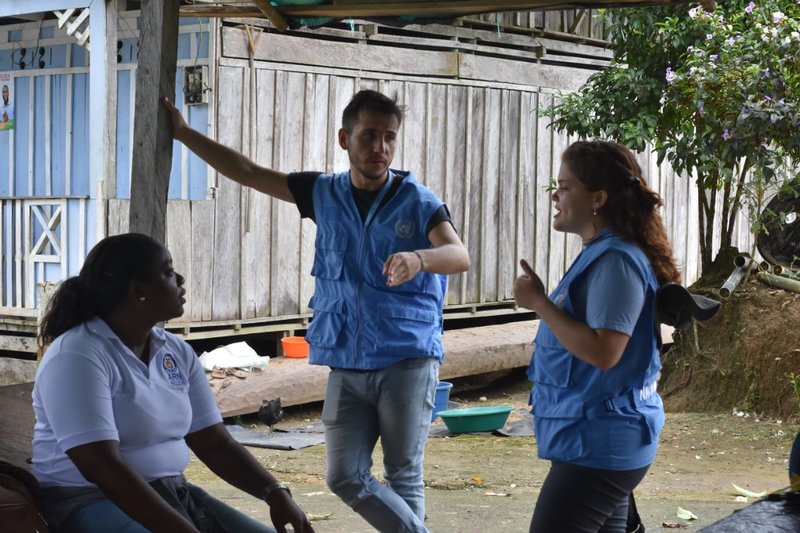 Before joining the UN Mission, Ornella´s job was teaching about peace with an NGO in Rosario, the first one in Argentina that took up the issue.

“Although the focus in my country has always been urban violence, the peace process in Colombia served as an inspiration for other countries to reflect on peacebuilding,” she affirms.

In 2019, a total of 331 UNV have provided their services for the United Nations system in Colombia. According to UN Volunteers, Colombia is fourth in the top five countries in the world, with the presence of UNV, due to the historic peace process that the country is experiencing.

Ornella likes the idea of ​​working directly with people. She explains while waiting for a boat at the Atrato river shore, to take her and the team to the community of Vigía del Fuerte, Antioquia. “The first time I worked in Colombia, I was in Villa Rica, a municipality in northern Cauca. I worked with a small organization during the Peace Agreement negotiations. It was a wonderful experience. Now, I am part of this great organization, the United Nations, which gives us a great support to influence high levels government officials, institutions and non-governmental organizations, on matters that impact the quality of life of ex-combatants, the enjoyment of their economic rights, social and cultural, in conditions of equality, human dignity, and non-discrimination.”

This group is the mobile team of the Quibdo´s Regional Team, which covers the middle area of ​​the Atrato river in Chocó and Antioquia. It is made up of two UNV - verification officers: Ornella and Albert Lladó from Spain; and Ignacio Miranda, an international observer from Paraguay. Field missions to the municipalities of Medio Atrato and Bojayá in (Chocó) and Vigía del Fuerte in (Antioquia), regularly, are accompanied by a paramedic and the Agency for Reintegration and Normalization (ARN in Spanish). Occasionally, delegates from other institutions join, seeking the support of the UN Mission to improve their relationship with people in the process of reintegration. 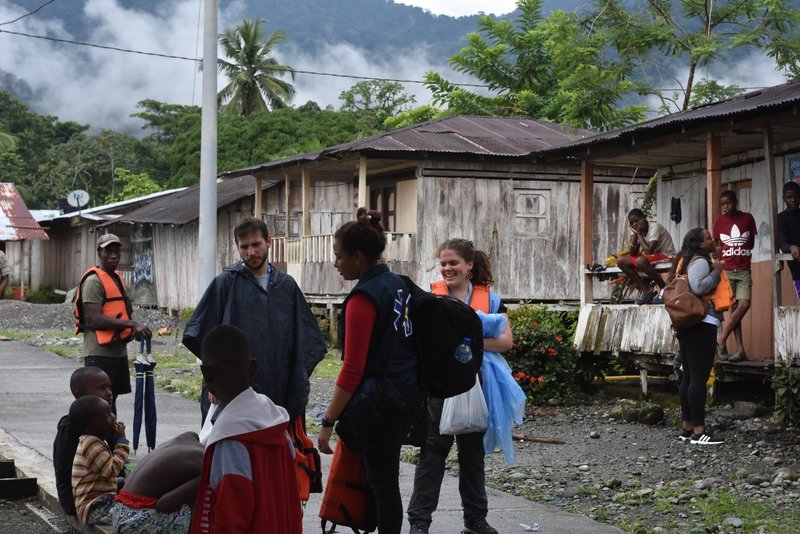 Verification officers must constantly interact with different State entities, as well as Chocó ethnic authorities, leaders and spokespersons of organized groups and civil society. Besides, the team speaks with agencies and programs of the United Nations system and the international community, present in Chocó. 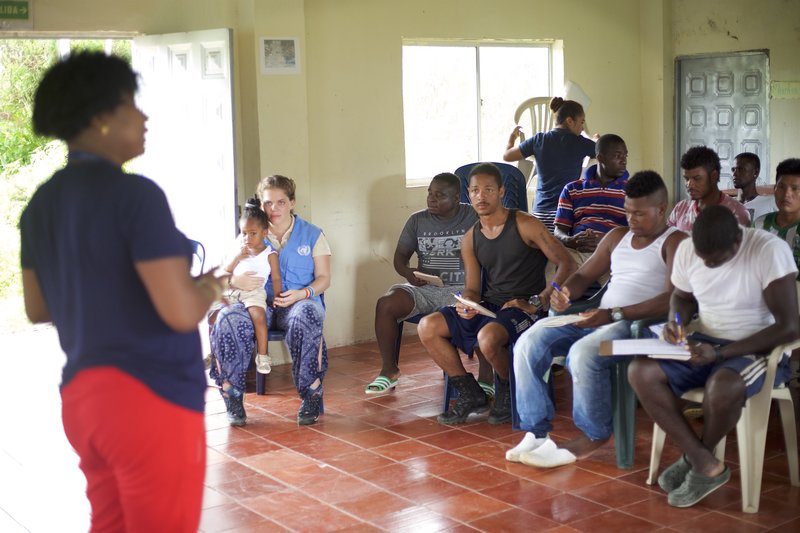 Recently, the mobile team of middle Atrato succeeded with the signing of a document that rules the coexistence and establishes protocols of relationship within communities and former Farc-ep combatants, that obliged them to respect the traditions and rules of the territory. This was possible with the support of UN Human Rights, the Catholic Church, and the Senior Community Council of the Middle Atrato: COCOMACIA. 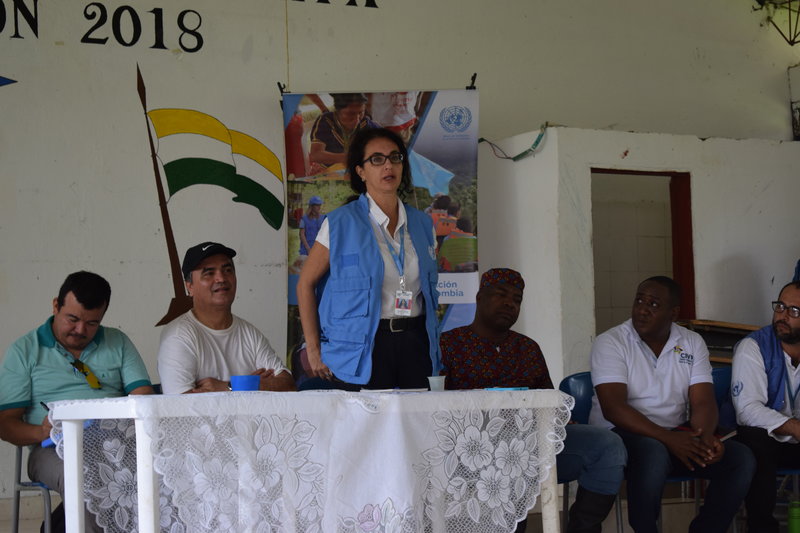 Another important achievement of the mobile team has been the implementation of the program of primary and secondary education for adults by the Education secretariat in La Villa- Bebará, Loma de Bojayá and very soon, in Vegaez, where people in the process on reintegration live.

Mission to the heart of the Arquía River

During the last weeks, it hasn't stopped raining over the Atrato river. The water, which has already reached the streets of Vigía del Fuerte, has increased more than a meter, flooding some homes on the riverbank. The mobile team traveled from Quibdó, in the helicopter to Vigía del Fuerte. Later, the team met with the municipal prosecutor of Vigía and people in the process of reintegration. The following day, the group embarked on Vegaez. 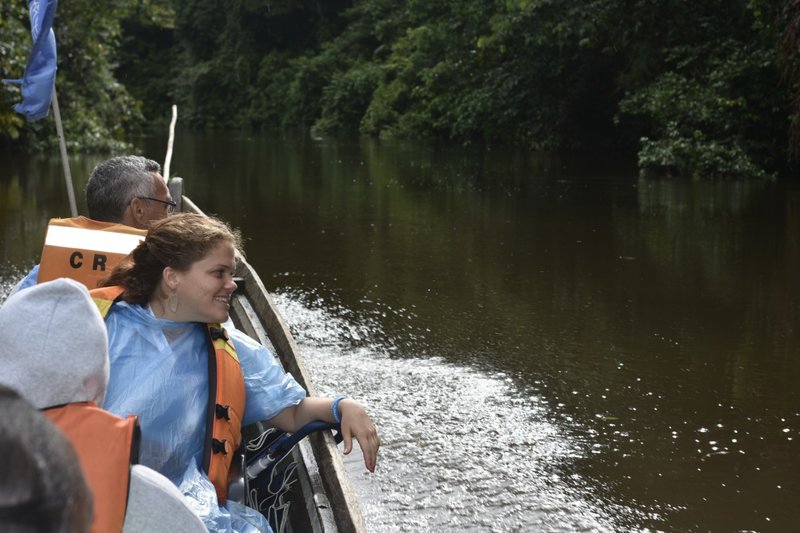 This particular place is located very distant of Vigía del Fuerte, inside the Arquía river. Several shallow depth parts of the river, beaches of sand and stones, and numerous fallen trees on the riverbed, made this trip a misadventure. It took about four hours, (one longer), to get to the destination. Albert and three other people were forced to get inside the water to push the boat. 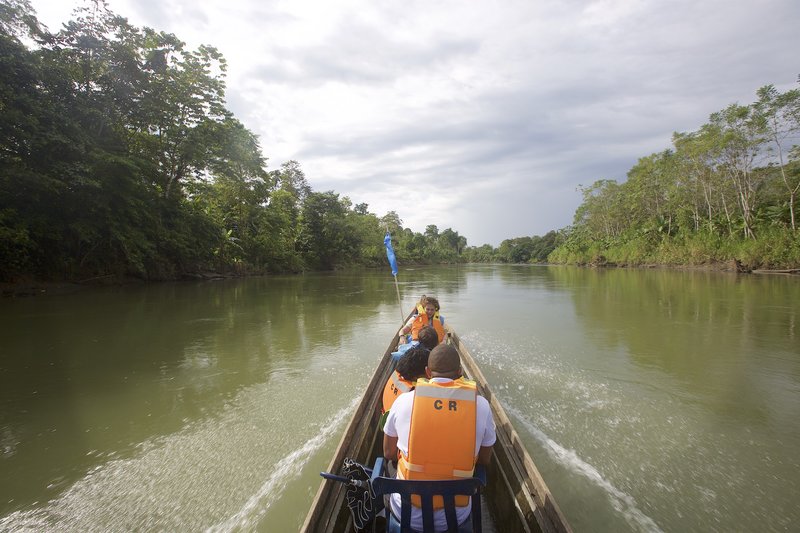 Ornella thinks the most significant is that despite the rain, the sun, and any logistical difficulties due to geographical conditions, within the group prevails companionship, solidarity, teamwork, respect, and diversity. Ornella and the rest of the mobile team may feel tired of traveling long distances, but their commitment to the peace of Colombia and the responsibility to do a good job is always a stronger call. 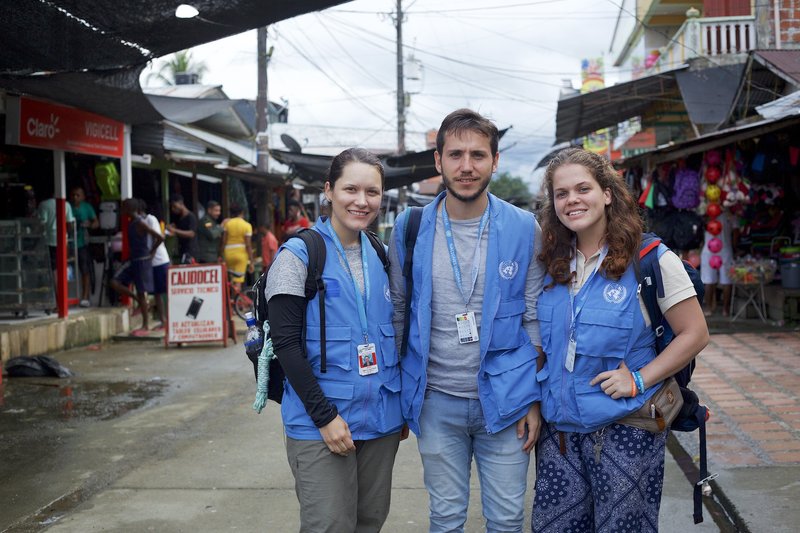