In Brisas, Carmen del Darien, the hope of reincorporation raises

In Brisas, Carmen del Darien, the hope of reincorporation raises

The Territorial Area for Training and Reintegration (TATR) of Brisas, a local community in the municipality of Carmen del Darién, Chocó received the visit of the United Nation’s Secretary General’s Peacebuilding Fund and its partners in Colombia.

The delegation counted with 16 representatives of countries and partner organizations of the Secretary General's Peacebuilding Fund (PBF) from Belgium, Canada, Germany, Ireland, Japan, Norway, Sweden, Switzerland, Tanzania and the United Kingdom. Their objective was to review the funded projects, through the United Nation Post-Conflict Multi-Partner Trust Fund (MPTF), to support the reparation of the victims of the conflict, the reintegration of former combatants and stabilization in the territories most affected by violence. 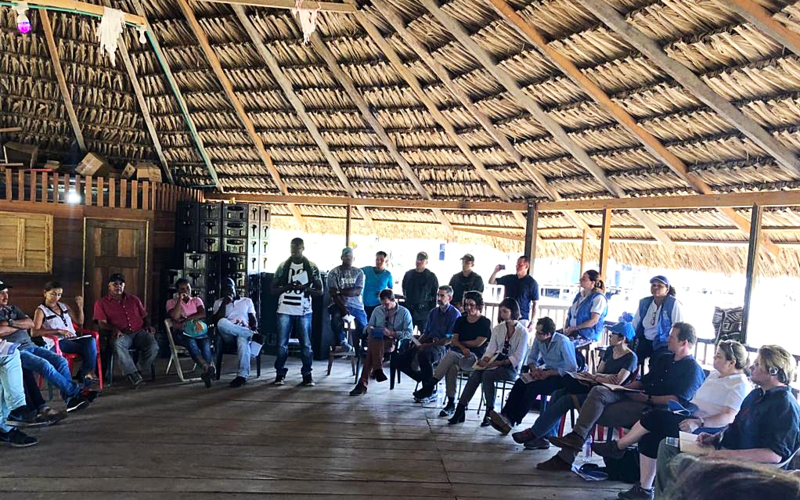 A team from the UN Verification Mission in Colombia present in the Chocó-Darién area accompanied the delegation to meet with leaders from TATR and surrounding communities. PBF partners and others present listened attentively to the concerns of former combatants, as well as their achievements, stories of transformation and hope in the process. 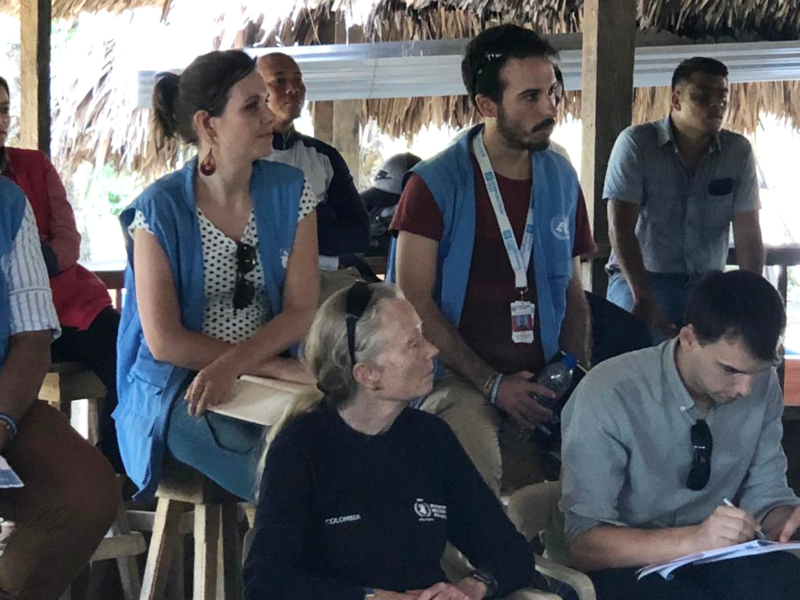 One of the speakers was Pablo Torres, excombatant and leader of the TATR of Brisas. From a young age, Pablo served as a militiaman of the 57th Front of the FARC-EP in Riosucio, Chocó. With the rise of violence in the area of Bajo Atrato 20 years ago, he decided to leave the town and move to a guerilla camp in the middle of the jungle. After living for a long time between rivers and trees, when the peace agreements with the government were formalized, Pablo and his companions replaced arms with books. This is how he began his transition to civil life in Brisas, the same place where he now lives with his wife Kelly and 74 other former combatants and their families.

In Chocó, the municiplaities of Carmen del Darién and Riosucio were considered by the PBF as key points for the socioeconomic reincorporation of former combatants of the FARC-EP, as well as Vegaez, a village of Vigía del Fuerte in  Antioquia department. The PBF finances a joint program for building peace and trust, which is implemented by United Nations agencies (WFP, UNDP, UNHCR, UNICEF) and a gender-based violence prevention program implemented by UN Women in Riosucio, Chocó. To this team are added, at the national level, the Agency for the Renewal of the Territory (ART by its acronyms in Spanish), the government of the department of Chocó, local authorities, Social Pastoral, Technological University of Chocó, ethnic organizations such as ASCOBA and other civil society organizations. 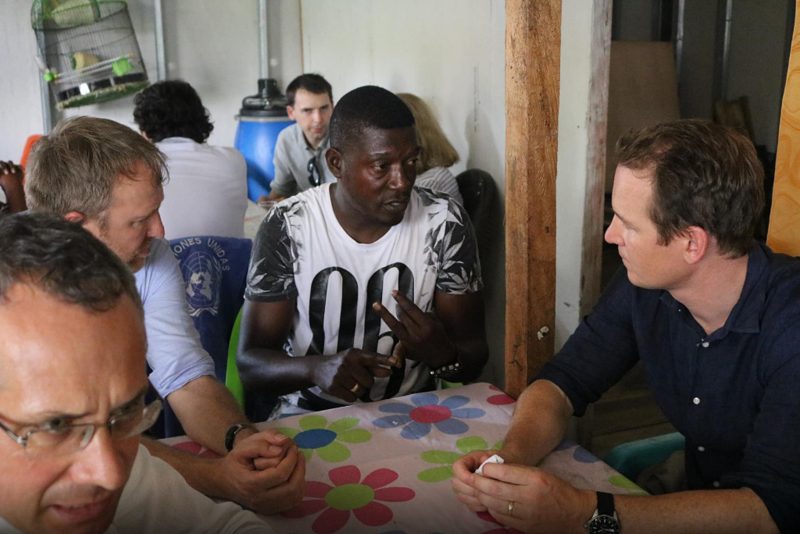 The United Nations Verification Mission in Colombia supports the excombatants reintegration process through the implementation of quick impact projects for the development of productive projects that generate opportunities for socioeconomic reintegration and reconciliation with local communities near the TATR.

At the TATR, the top project is the farming of red tilapia in geomembrane tanks. The project that began eight months ago, was an initiative of the community in the TATR to improve their food security and generate commercial activities between them and the neighboring communities.

The UN Verification Mission through UNDP, in coordination with the Agency for Reintegration and Normalization (ARN), SENA and the Office of the High Commissioner for Peace, donated $18,000 USD to strengthen this project in order to expand the fish farming to five tanks powered by solar panels. "The tanks and the solar panel system are already installed and working; this project is our great hope for economic reintegration. Other concerns such as the land owership must be solved eventually; this process must continue for the well-being of all of us who support peace in Colombia", affirmed Torres, one of the project's leaders.

Within the counterparts and sponsor of the UNMPTF, there is the United Nations Peacebuilding Fund (PBF) which seeks to build community trust in the agreements based on early victories and opportune management of the most critical risks to the construction of peace in the territories, as well as generating appropriate conditions for the coordination of the peace agreements implementation in the prioritized territories. 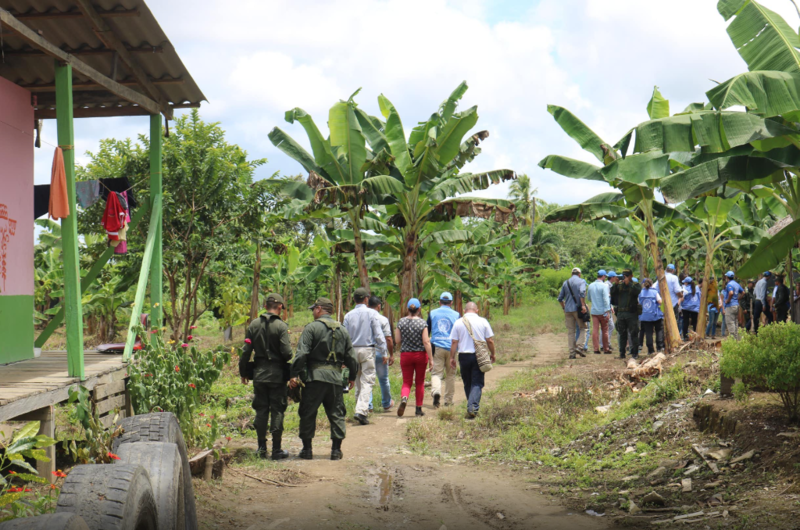 For Marc André Franche, director of the PBF Fund, it left a good impression to meet all the people, leaders, police, government agencies, Ombudsman's Office and victims committed to peace. "The impact on the transformation of people's lives is evident thanks to the commitment of all parties, however, it is clear that there are still large gaps of inequality that need to be urgently targeted," he added during the visit. The PBF also expressed its intention to invest more resources in programs in this area of the country.

In addition, Jose Mosquera, ex-combatant and TATR leader thanked the UN Verification Mission and UN agencies for their accompaniment, emphasizing that, thanks to their support they have been able to move forward; "they generate confidence in me to motivate my colleagues to work in the process of reintegration into civilian life that allows us to contribute to the development of the country and to the construction of a stable and lasting peace," he added.

Foreign visitors returned to Bogota to continue their meeting schedule with several entities, before returning to their countries. This visit was significant to motivate the families in Carmen del Darién, who work every day to build peace, with the support of the Colombian government and the international community.

Foreign visitors returned to Bogota to continue their meeting schedule with several entities, before returning to their countries. This visit was significant to motivate the families in Carmen del Darién, who work every day to build peace, with the support of the Colombian government and the international community.